The Happiest Places in America in 2015 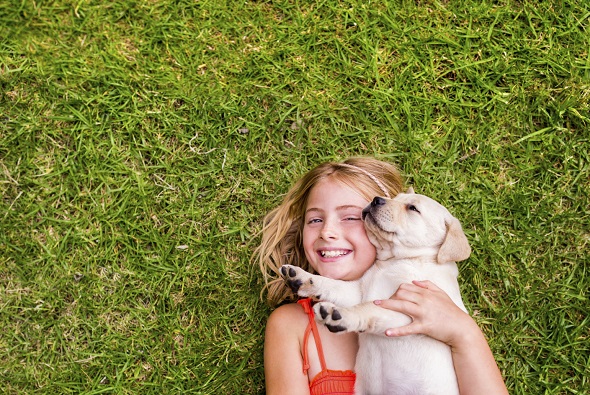 Residents of the United States enjoy a quality of life that is among the highest in the world. The U.S. consistently ranks in the top 10 of the OECD’s “Better Life Index,” which compares countries based on a wide variety of factors. In 2015 the red, white and blue ranked 6th overall – just behind Canada.

However, along with being one of the happiest countries in the world, the United States is also one of the most diverse. Just as no two people are the same, no two U.S. counties are exactly alike. Even within individual states, the quality of life can vary greatly from one area to the next. SmartAsset analyzed data on metrics ranging from marriage rates to bankruptcies to life expectancy to find the U.S. counties with the highest quality of life – the happiest places in America.

To quantify the quality of life in U.S. counties, SmartAsset collected data on every U.S. county with a population of at least 50,000 – 978 counties in total. For each of those counties, we looked at eight different metrics reflecting four factors key to a high regional quality of life:

Calculate what your closing costs will be in any U.S. county.

We ranked every county on these eight metrics, giving equal weight to each metric. We then averaged those rankings, and applied a score from 0-100 based on that average. The county that had the average ranking closest to 1 received a perfect 100, while the county with the lowest average ranking received a 0. The results, below, are the happiest counties in America. 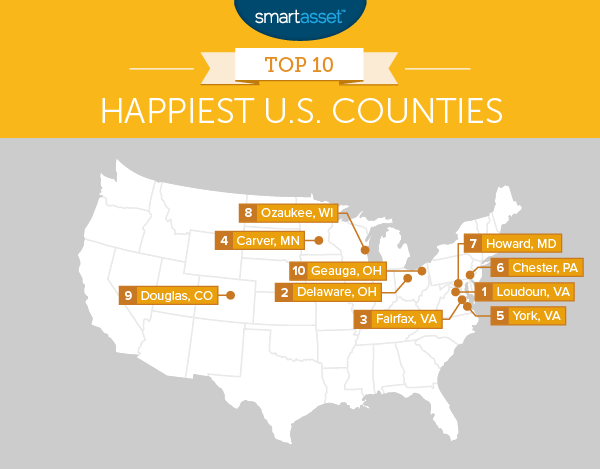 Loudoun County has grown rapidly in recent years. The population has exploded from less than 90,000 in 1990 to over 310,000 today. One reason for that growth? Loudoun County offers residents the highest quality of life of any major county in the U.S.

Moving to Loudoun County? Find out what your state and local taxes will be.

Loudoun County ranked in the top 20 out of the nearly 1,000 counties in SmartAsset’s study for six of the eight metrics we considered. The county’s poverty rate is just 3.6%, lowest of any major U.S. county. Meanwhile, the life expectancy of 82.6 ranks sixth and the marriage rate of 62.3% ranks 11th out of all U.S. counties with a population over 50,000.

Located north of Columbus, Delaware County has long been recognized as a great place to call home. The county’s median income is $89,757, while a three person household in the county would need at least $34,057 to afford the necessities. That adds up to an income-to-expenses ratio of 2.64, second highest of the nearly 1,000 counties in our analysis.

Perhaps even more important to quality of life than finances, however, is family stability, and on that measure Delaware County likewise ranks near the top. Delaware County’s marriage rate of 64.2% is 4th highest of U.S. counties with a population over 50,000.

With a population of more than 1.1 million, Fairfax County is the most populous county in Virginia, and the largest county to rank in the top 25 of SmartAsset’s analysis. Fairfax is one of the few U.S. counties with a median household income over $100,000 – but household income isn’t the only reason the county’s quality of life is so high.

The average life expectancy in Fairfax County is 83.1 years, third highest of any major U.S. county. Part of the reason for that longevity is likely that nearly 63% of the population exercises regularly. The U.S. average is 54.5%.

This Minnesota County has stable families and a strong economy, both of which are key to overall well-being. The county’s marriage rate of 63.4% ranks seventh of the nearly 1,000 counties in our study. Likewise, the average unemployment rate from 2009 to 2013 was just 5.7% – the U.S. average over that same period was 9.7%. Plus, the county has at least 52 lakes, which means plenty of opportunities for ice fishing in the winter!

Formed in 1634, York County is one of the oldest counties in the U.S. It, or specifically the city of Yorktown, was the site of the British surrender at the end of the Revolutionary War in 1781. Today, York County is one of the nicest places to live in the United States. The county’s poverty rate of 5.7% ranks as the 23rd lowest out of any U.S. county with a population over 50,000. It also has the 11th highest marriage rate of major U.S. counties: 62.3% of adults in York County are married.

Chester County is a largely suburban county located west of Philadelphia and north of Wilmington, Delaware. SmartAsset’s analysis found that Chester County has one of the lowest divorce rates of any U.S. county. Just 7.6% of adults in Chester County are divorced, 23rd lowest of the 978 counties with a population over 50,000.

This Maryland County is located west of Baltimore and has the fifth lowest poverty rate of the nearly 1,000 counties in our study. Just 4.6% of Howard County’s population lives below the poverty line.

Howard County also has some of the best public schools in the country. The Howard County Public School system’s 2014 graduation rate of 92.85% is well above both state and national averages. While the quality of public education was not factored into our analysis, it is likely an important consideration for anyone thinking about moving to or buying a home in Howard County.

Located on the sandy shores of Lake Michigan, Ozaukee County ranked in the top 100 for seven of the eight metrics we considered, the only county to do so. Thanks likely in part to the abundance of nearby outdoor opportunities, the residents of Ozaukee County rated especially well for their healthy lifestyles. The life expectancy in Ozaukee County is 81.15, and 63.6% of the population gets the recommended amount of weekly exercise.

If you’re looking for a high quality of life in the western United States, Douglas County is a good place to start. It is the top ranked western county in our analysis, and indeed the only western county to land in the top 25.

The second Ohio county to land in the top ten, Geauga County has a median income of $67,663, 3rd highest in Ohio. However, it is also highly affordable. According to researchers at M.I.T., a family of three (two adults and one child) could live on just $33,831 per year in Geauga County. That means the typical household in Geauga County makes more than twice the minimum cost of living. For the same reason, Geauga County is one of the best places in the U.S. for seniors living on Social Security. 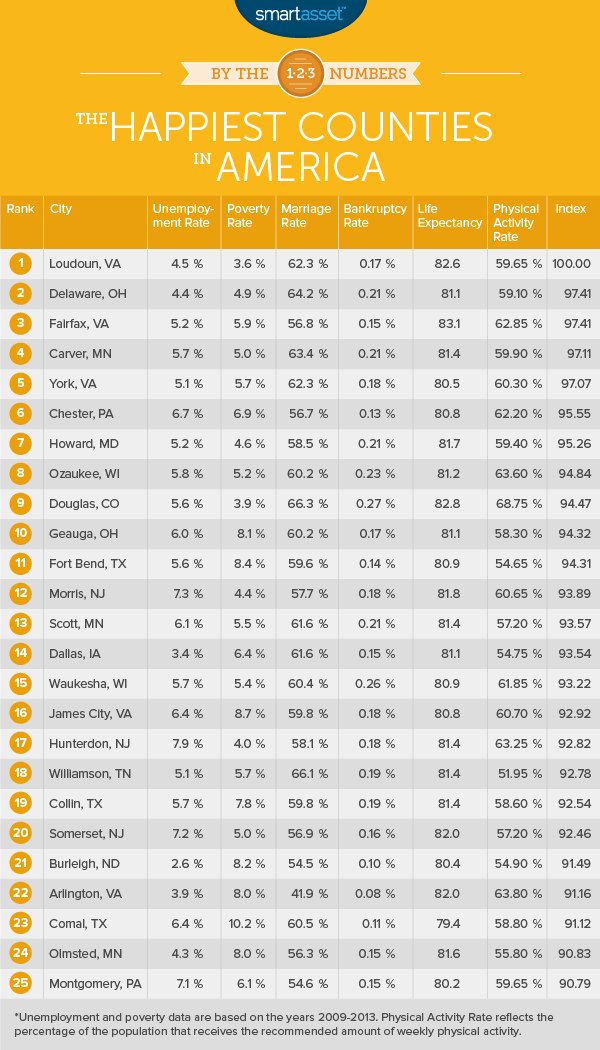 Read the 2016 version of SmartAsset’s study on the happiest places in America.