Best Places to Trick-or-Treat in 2019 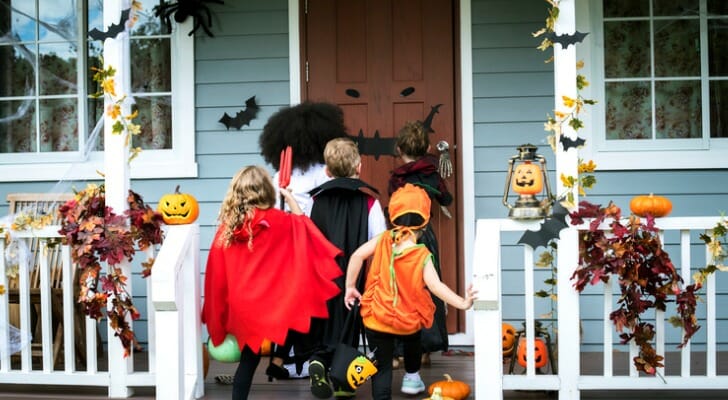 As soon as the air turns crisp and the leaves start to change color, trick-or-treaters all over America start to count down to Halloween. They look forward to donning inventive costumes and hitting the streets, and the experience is all the more exciting when the houses they’re visiting are prepared to reward them with candy. Factors like safety and weather make some places more trick-or-treater friendly than others. That’s why SmartAsset crunched the numbers to find the best places in the U.S. to go trick-or-treating.

To find the best places to trick-or-treat, we looked at the following seven metrics: single-family housing density, percentage of residents younger than age 15, median home value, violent crime rate, property crime rate, precipitation rate and average temperature. For details on our data sources and how we put the information together to create our final rankings, check out the Data and Methodology section below.

This is SmartAsset’s sixth annual study on the best places to trick-or-treat. Check out the 2018 study here. 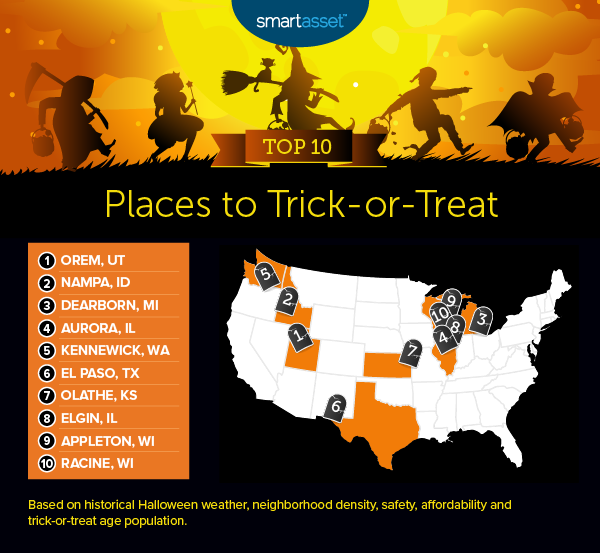 Orem, Utah leads our top 10 for the second year in a row. It places especially well in two metrics: its low rate of violent crime, for which it comes in second overall with approximately 70 incidents per 100,000 residents, and its top-five rate for temperature, with an average temperature of approximately 60.5 degrees Fahrenheit. Orem also has the 12th-highest percentage in the study of people younger than 15, at 24.9%.

Nampa, Idaho takes the No. 2 spot in our study and has the second-lowest number of historic incidents of precipitation, at just 0.6%. Its average Halloween-day temperature of 58.5 degrees Fahrenheit ranks in the top 25 of this study. The density of single-family homes in Nampa is approximately 854 per square mile, a top-third rate.

Dearborn, Michigan has a housing density of 1,032 single-family homes per square mile and ranks among the top 40 cities for this metric across all 256 cities in our study. Dearborn also ranks in the top 50 for the percentage of its population younger than age 15, at 22.0%, and in the top 50 overall for its relatively low violent crime rate, at around 273 incidents per 100,000 residents.

Aurora, Illinois ranks fourth in our study on the best places to trick-or-treat. It has the second-lowest rate of property crime in the study – around 1,322 incidents per 100,000 residents. It also finishes in the top 50 for lowest amount of violent crime, around 258 incidents per 100,000 residents. The average maximum temperature on Halloween in Aurora is approximately 56 degrees.

Kennewick, Washington, taking the No. 5 spot, has the lowest historical precipitation chances for this date in the study, at just 0.5%. The average maximum temperature in this city on Halloween is around 58 degrees Fahrenheit, so the weather should be well suited for a night of spooky fun. The average home value in Kennewick is $235,700, which means that residents who are managing housing costs well may be able to sock away some of those savings for extra candy.

El Paso, Texas places in the top 40 for low home value across all 256 cities in our study, at $130,900 on average. It ranks 44th overall for youth population, with 21.9% of the city’s population younger than 15. El Paso also ranks 28th overall for low property crime rate, with around 1,819 incidents per 100,000 residents. It’s a bit on the warmer side, with a historical average temperature of 69.5 degrees on Halloween.

Taking seventh place in our top 10 is Olathe, Kansas, which has the seventh-lowest rate of property crime in the study, approximately 1,428 incidents per 100,000 residents. Olathe ranks in the top 20 of the study in terms of its youth population, with almost a quarter of residents younger than the age of 15. It is temperate there on Halloween, with a historic average temperature of 61.9 degrees Fahrenheit.

Elgin, Illinois has the sixth-lowest rate of property crime in the study — around 1,400 incidents per 100,000 residents. It ranks 29th overall for its relatively low violent crime rate, at approximately 199 incidents per 100,000 residents. The average home value is $196,300, a figure that puts it in the more affordable half of all 256 cities in this study for this metric.

Appleton, Wisconsin is the only city in the top 10 of this year’s study that did not crack the list last year. It ranks 13th overall in terms of property crime, at around 1,547 incidents per 100,000 residents. There are around 841 single-family homes per square mile, a rate for which Appleton ranks in the top half of the study. It might be chilly on Halloween, though – with a historical average temperature of just 50.7 degrees Fahrenheit – so trick-or-treaters should be sure to pick a warm costume.

The final city in our top 10 places to trick-or-treat this year is Racine, Wisconsin, which places 15th when it comes to housing density, as there are around 1,270 single-family homes there per 100,000 residents. That can increase trick-or-treaters’ chances of scoring some great candy. The average value of those homes is $117,300. Like the other Wisconsin city on this list (Appleton), it is a bit on the cold side: The average historical temperature on Halloween in Racine is 53.4 degrees Fahrenheit.

To find the best cities for trick-or-treating, SmartAsset compared more than 256 cities across the following metrics: