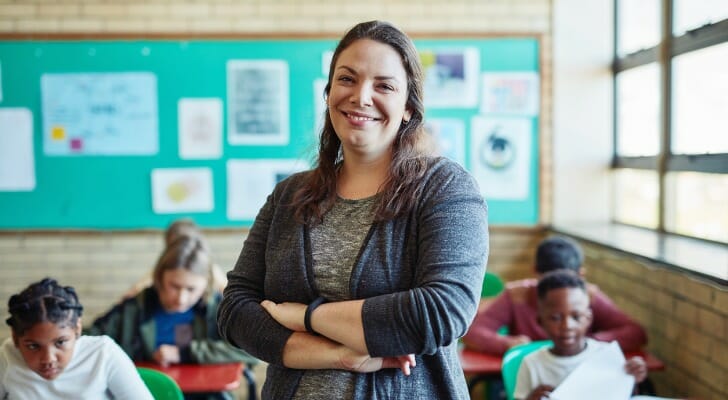 From lesson plans and student development to grading and proctoring, teaching is one of the most demanding jobs out there. And it can also be demanding financially – some teachers struggle to afford local housing costs comfortably, and some school districts receive support from municipal bodies. There are some places, though, where it is less difficult in this regard to be a teacher than in others. That’s why SmartAsset analyzed data from various sources to find the best U.S. metro areas to be a teacher.

To do so, we considered the following metrics: teachers as a percentage of the workforce, average income, one-year change in income, one-year change in employment, spending per student, housing costs, student-to-teacher ratio, unemployment rate and percentage of households with internet access. For details on our data sources and how we put all the information together to create our final rankings, check out the Data and Methodology section below.

This is SmartAsset’s 2020 version of our study on the best places for teachers. Read the 2019 version here. 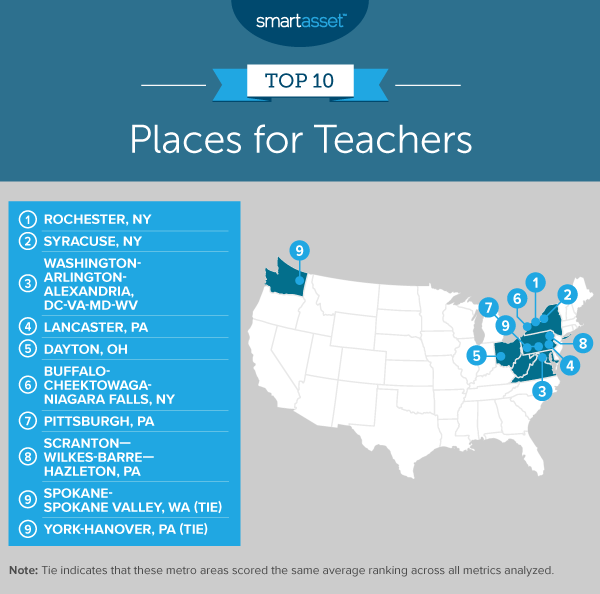 Rochester, New York is the best metro area in the country to be a teacher, according to our study. It places second in two different categories – average spending per student ($21,477) and student-to-teacher ratio (12.40). Teachers are also a big part of the community in Rochester, with 2.24% of the workforce made up of teachers, the ninth-highest rate for this metric in the study.

The metro area around the nation’s capital – which includes not only Washington, D.C. but parts of Virginia, Maryland and West Virginia – ranks in the No. 3 spot. The D.C. metro area has the fourth-highest percentage of households with internet access across all 132 metro areas in the study (91.9%), which is especially important right now, while many students learn from home because of the COVID-19 pandemic. Teachers in the area earn $81,167 on average, the 10th-highest average salary in the study. The student-to-teacher ratio ranks 20th-best, at just 14.64 students per teacher.

Lancaster, Pennsylvania places eighth overall for its positive one-year change in employment, an uptick of 9.90%. Lancaster teachers can expect substantial monetary support from their districts, as the average spending per student ranks 10th-highest, at $17,248. The metro area also ranks 13th-best for its low student-to-teacher ratio, with just 14.17 students per teacher.

The Dayton, Ohio metro area doesn’t rank in the top 10 of the study for any one metric, but it ranks within the top 50 for six out of the nine metrics we considered. That includes having the 25th-highest percentage of teachers in the workforce, at 1.93%. It ranks 26th for its relatively high average spending per student, at $14,330, and 28th for its one-year employment bump of 4.70% for teachers.

The third New York State metro area in our top 10 is Buffalo-Cheektowaga-Niagara Falls. Teachers there can expect relatively small classrooms: The student-to-teacher ratio is 13.14, the fourth-best in the study. Buffalo also ranks fourth for average spending per student, at $20,385. While May 2020 unemployment numbers were relatively high there, prospects are still promising, as the metro area ranks within the top 25% of the study for teachers as a percentage of the workforce (at 1.84%) as well as for 2019 average income for teachers. At $71,923, it’s the second-highest salary figure in our top 10 and the 22nd-highest overall.

Pittsburgh, Pennsylvania ranks ninth-best in the study for average spending per student ($18,050) and 11th-best for student-to-teacher ratio (approximately 14 students per teacher). Pittsburgh is also in the top 30 in terms of 2019 teacher earnings, with a median income of $70,969.

Coming in at No. 8 is the Scranton, Pennsylvania metro area. The Electric City metro area spends the 17th-highest amount per student of the total 132 places we studied, at $15,389. It is also affordable to live there: The average housing costs are $809 per month, ranking 18th-lowest overall.

The only metro area in our top 10 located in the Pacific Northwest, Spokane, Washington takes the No. 9 spot. It ranks second-best for its positive one-year change in teacher employment, jumping 16.07%. In addition, it cracks the top 30 in terms of internet access, with 88.5% of households having the ability to connect. While Spokane does have a fairly high May 2020 unemployment rate, it finishes within the top quarter of the study for 2019 average teacher income as well as one-year change in income – at $69,380 and a growth of 5.92%, respectively.

The final metropolitan area in the top 10 is York-Hanover, Pennsylvania. This area ranks 10th-best for its high rate of teachers as a percentage of the workforce, at 2.22%. It also comes in 23rd out of 132 for 2019 average income, at $71,624. Although employment for teachers dropped about 6% from 2018 to 2019, the metro area has a top-20 figure for average spending per student and top-30 rate for student-to-teacher ratio.

To find the best places to be a teacher, SmartAsset looked at the 132 largest U.S. metro areas for which data was available. Specifically, we compared the metro areas across the following nine metrics:

Getting Schooled in Making the Most of Your Money