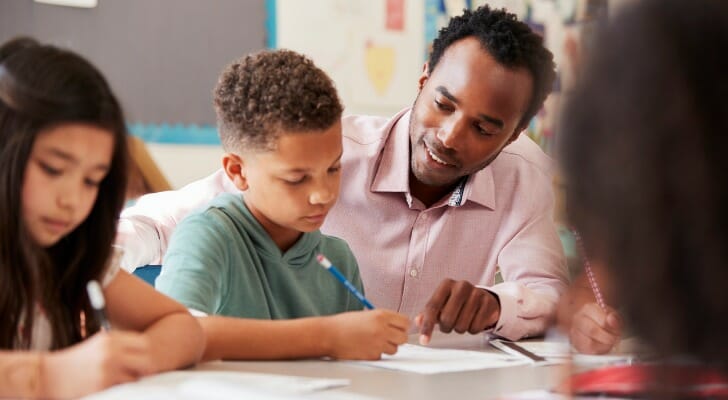 Teachers are some of the most important people in our society, educating young people and molding the leaders of tomorrow. While being a teacher is certainly rewarding, it isn’t always the most lucrative of professions. But various considerations such as housing costs, income and union support can make certain metro areas more attractive than others for teachers.

To find the best places for people working on the front lines of America’s education system, SmartAsset considered a number of data points. We looked at factors including income, income growth, job growth, spending per student, union strength, average test scores, graduation rate, violent crime rate and housing costs. For details about our data sources and how we put it all together to create our final rankings, check out the Data and Methodology section below.

This is SmartAsset’s fifth annual study of the best places to be a teacher. Check out the 2018 version here. 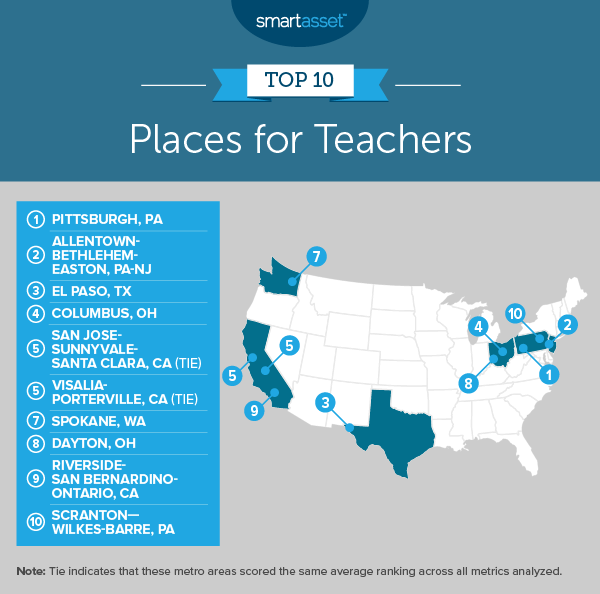 Pittsburgh, Pennsylvania takes the top slot in this study for the second year in a row. The average income for teachers here is $66,822. That’s the 29th-highest salary out of all 119 metro areas we studied. Teachers in Pittsburgh are supported by a strong union, as the state of Pennsylvania has the fourth-strongest union in the country. Pittsburgh also has a 92% graduation rate, a top-10 rate. Housing costs are fairly low, an average of $837 per month. Pittsburgh itself is also the top undervalued city in America.

Another partly Pennsylvania-based metropolitan area comes next, Allentown-Bethlehem-Easton, Pennsylvania-New Jersey. A teacher’s income in this area averages $71,843. Teacher income growth is also strong here, with a 13% uptick from 2016 to 2018. This metro area ranks in the top 20 and top 10 in our study for these metrics, respectively. In addition, teacher employment has grown by 20%, the third-highest growth rate in our study. Pennsylvania, as mentioned previously, also has the fourth-strongest union for teachers in the country.

El Paso, Texas comes in at third. The highlight for this town near the Mexican border is the job growth. In recent years, teacher employment has grown by 84%, the highest rate for this metric in our entire study. The average salary for a teacher also grew by 22% from 2016 to 2018 – a top-five rate – to the current income of $64,306. A downside to being a teacher in El Paso, however, is relative lack of support. Spending per student is low, at just $9,513. Texas’ teachers’ union is the eighth-weakest in the nation.

Columbus, the capital of Ohio, is next on this list. Columbus has a top-15 graduation rate in our study overall, at 91%. It also has a fairly high percentage of students proficient in math and reading, 64%. That’s a top-20 rate. The average income for a teacher is $63,415. It also holds a top-30 rate in our study for student spending, according to data from the Census Bureau. Columbus has not had very much income growth for teachers in recent years, however – just 5% between 2016 and 2018. But the economy in the city seems robust overall, especially given that Columbus is America’s No. 1 city to work in tech.

The first Golden State metro area on this list is San Jose-Sunnyvale-Santa Clara, California, coming at fifth place. The average income for teachers in this area is $78,604. That’s the sixth-highest salary on this list, and could be a contributing factor to why the number of teachers here grew by 10% from 2016 to 2018. California has the 6th strongest teachers union in the country. The San Jose-Sunnyvale-Santa Clara metro area has very high average housing costs of $2,341, however, ranking last for this metric out of all 119 metro areas in our study. In fact, San Jose itself is the city where homeowners spend the most on housing in the country.

Another California metro is tied for fifth place with the San Jose area. Visalia-Porterville, located in the San Joaquin Valley, has an average teacher salary of $75,836. That’s not quite as high as is it in its neighbor to the northwest but still a top-10 rate. The school district also spends $13,010 per student, a top-25 rate out of all 119 metro areas in our study. Like in Columbus, Ohio, the graduation rate in Visalia-Porterville is 91%. In addition, monthly housing costs are also fairly low, at just $967 on average. This means that the average teacher would be spending approximately 15% of his or her income on the average monthly housing costs.

Spokane, Washington ranks seventh in our study for the best places to be a teacher. The average salary for teachers in Spokane is $65,577, the 32nd-highest rate overall. Housing costs here are $948 on average. Spokane has seen 13% growth in the number of teachers between 2016 and 2018, a top-five rate. Washington State has the 10th-strongest union in the country.

Dayton, Ohio ranks in eighth place in our study. The average salary for a teacher here is $63,755, ranking 35th overall. Average monthly housing costs here are $834, a top-30 rate. Dayton also has a fairly high violent crime rate of 879 violent crimes per 100,000 residents each year. Still, the graduation rate is 90%, and 64% of students are proficient in math and reading – both of which are top-25 rates. The number of teachers in Dayton, though, actually decreased by 4% between 2016 and 2018.

The final California metro area on this list is Riverside-San Bernardino-Ontario. The average income for teachers here is $85,077, the second-highest salary in this study. Housing costs in the area are high at $1,382 – but not as high as in San Jose. Riverside saw 10% income growth for teachers between 2016 and 2018 – a top-20 rate – and a 13% employment jump between 2016 and 2018 – a top-10 rate. The Riverside area ranks 36th overall for the metric of spending per student, at $12,204. A relatively small percentage of students are proficient in math and reading, however, at just 37%.

Scranton-Wilkes Barre, Pennsylvania is the final metro area in the top 10 of our study on the best places in America to be a teacher. The average salary for teachers here is $60,649, which ranks in the top half of the study. The average housing costs, though, are $793 per month, the 19th-lowest rate overall. Income has been flat in recent years, and the number of teachers in the area has grown by 4%. The schools in Scranton-Wilkes Barre spend $13,626 each year per student, a top-25 rate in our study.

SmartAsset looked at data for 119 metro areas to find the best places to be a teacher. Specifically, we compared the metro areas across the following nine metrics:

Tips for Managing Home and Career