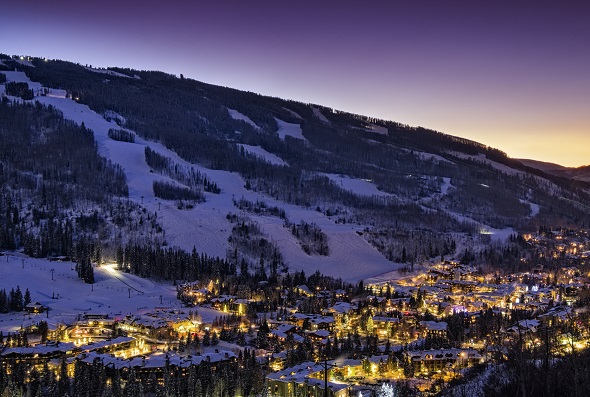 Shorter days, cold weather, lousy produce: there’s much to dislike about winter. Indeed, surveys of public opinion routinely find that winter is America’s least favorite season. (Spring and fall trade places as the favorites.) There’s even a medical term for winter-induced melancholy: seasonal affective disorder. In America’s ski towns, however, this attitude is flipped on its head.

This is SmartAsset’s second annual study of the top ski towns in the U.S. View the 2016 ranking here.

But an embrace of cold weather isn’t the only thing that makes ski towns special. Add to that the beautiful alpine scenery, the charming small-town atmosphere and lots of great taverns and restaurants, and you have some of the country’s best places to live – regardless of the season.

To find America’s best ski towns, SmartAsset collected data on 128 towns that are located directly adjacent to or within a few miles of a ski resort. Our analysis sought to find areas that are first and foremost great places to live but that also have access to high quality skiing. To that end, we looked at quality of life metrics such as unemployment and housing affordability.

Moving to the mountains? Figure out your finances with SmartAsset’s free mortgage calculator.

Additionally, we incorporated the PAF score for the principal ski resort in each town. The PAF score is a measure of ski resort quality developed by ZRankings.com. It is based on things like average snowfall, number of lifts and vertical drop. (Read more about our methodology below.) 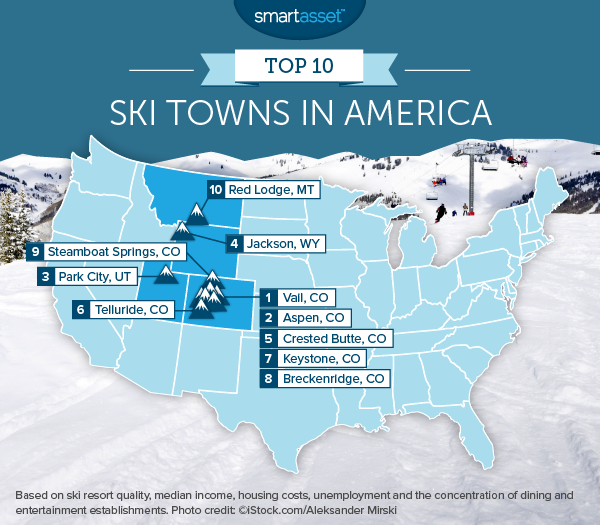 Vail is a ski town in the truest sense of the term. There was no town before the ski resort was built. The town was specifically established to provide housing and amenities to the guests and employees of the resort. While the town’s economy continues to rely on tourism, it has grown substantially since those early days.

Today there are over 5,000 permanent residents in the town of Vail. The unemployment rate hovers below 3% even when the ski-lifts aren’t running,  while median household income is more than $70,000. Then there’s the resort itself. It rates as the fifth best resort in North America and the fourth best in the U.S., garnering a “Pure Awesomeness Factor” score of 93.7. Gnarly!

As the perennial host of the Winter X Games, Aspen is nearly synonymous with “ski town” in the popular imagination. While it certainly has great skiing (three Aspen ski resorts rank among the top 25 best in North America) there is much more to do in Aspen than shred.

After ranking fourth in last year’s study, Park City once again rates as one of America’s top five ski towns.  In addition to the two ski resorts in town (Deer Valley and Park City Mountain Resort), there are numerous mountains within an hour’s drive of Park City, including Snowbird, the #2 ranked ski resort in North America.

As the host of America’s largest independent film festival (Sundance) and a number of major outdoor merchandise manufacturers, Park City enjoys a robust local economy. It has the fourth highest median income of any ski town in America.

When it comes to natural beauty, it’s hard to beat Jackson, Wyoming. The town is located in  Jackson Hole, a flat valley tucked between several 10,000 foot mountain ranges in western Wyoming.

The area’s largest ski resort, also called Jackson Hole, rates as the best in North America, with a near-perfect PAF score of 99. According to ZRankings.com it receives 367 inches of snow annually and has a vertical drop of more than 4,000 feet.

The town of Jackson rated well for its low unemployment rate and relatively affordable housing. While the median income of $57,614 in Jackson is lower than many other top ski towns, it’s worth keeping in mind that there is no state income tax in Wyoming.

With a permanent population of about 1,500, Crested Butte is the smallest ski town to rank in the top 10. For those seeking a small mountain town to call home, Crested Butte may be the perfect choice. Its unemployment rate is less than 3%, while its concentration of entertainment establishments ranks as the fourth highest among the 131 ski towns in our analysis.

As of the beginning of December, Telluride has already received nearly 5 feet of snow. No one was complaining. The Telluride area has been home to some of the country’s best skiing for nearly half a century, from the time the first ski lift was installed in what had been a small mining town.

Moving to Colorado? Find out what your taxes will be.

Today skiing, snowboarding and other outdoor activities such as fly-fishing and mountain climbing draw tourists from around the world and keep the local economy spinning. Median income in Telluride is over $67,000, while unemployment was just 2.6% as of August 2015.

Located 70 miles west of Denver, the town of Keystone is situated at the base of the Keystone Ski Resort. It is also just 10 minutes from Arapahoe Basin, which offers one of the nation’s longest ski seasons, thanks to its high altitude and northern-facing slopes. The town of Keystone is one of the most affordable in the country, with median monthly housing costs of just $869, a mere 17% of median income in the town.

Breckenridge emerged as a mining town in the mid-19th century after the discovery of gold in the area. While mining activities have long since ceased, the town’s economic prosperity has not faded.

The largest city in northern Colorado’s Routt County, Steamboat Springs is known as Ski Town USA, and with good reason. Steamboat Ski Resort has 18 different lifts and receives 370 inches of snow annually, according to ZRankings.com, which assigns the resort a Pure Awesomeness Factor score of 84.5. The area also has fairly low property taxes, with an average effective rate of just 0.40%.

Located northeast of Yellowstone National Park in southern Montana, Red Lodge is a charming small town with an Old West feel. Main Street in Red Lodge is lined with bars, restaurants, cafes and shops. It is listed on the U.S. National Register of Historic Places. Red Lodge Mountain Resort is just minutes away, while Yellowstone can be reached via the Beartooth Highway in less than an hour. 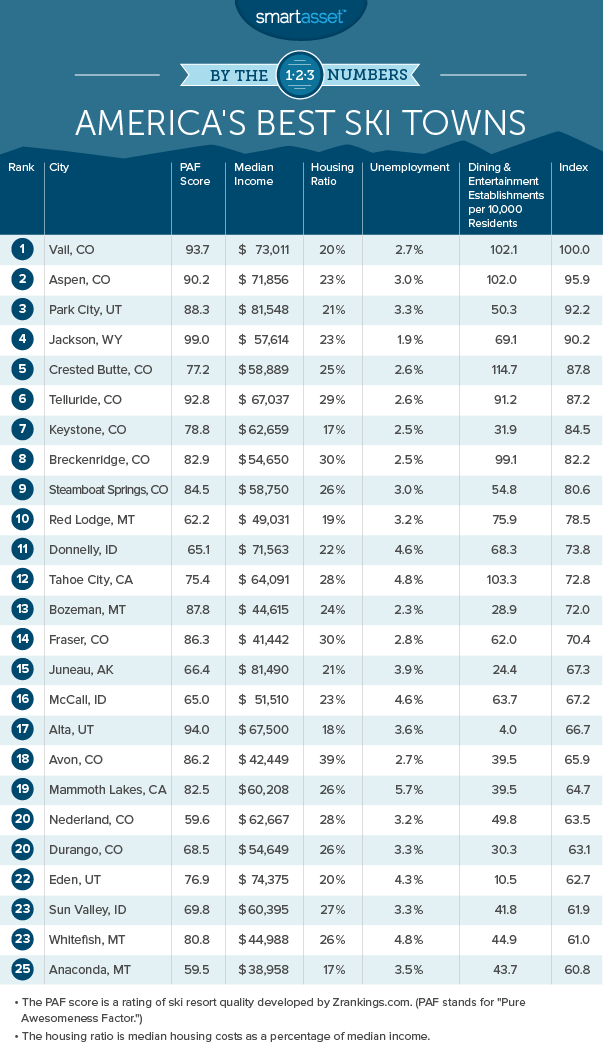 This is SmartAsset’s second year of conducting our study of the best ski towns in the U.S. While the 2014 study was focused solely on the quality of life in each town, this year we also incorporated the quality of nearby skiing.

To do so, we used the “PAF Score” developed by ZRankings.com. The PAF Score is based on factors such as snowfall, acreage and number of lifts. (PAF stands for Pure Awesomeness Factor. Right on.) In addition to the PAF Score, we incorporated many of the same quality of life metrics as in last year’s study. Specifically we looked at the following five metrics:

To calculate an index score for the 128 ski towns in our study, we ranked them on the above six factors, giving double weight to the PAF Score and single weight to all other factors. We then averaged those rankings. The town with the highest average ranking scored a perfect 100, while lower scores were assigned to towns with lower average rankings.

Read the 2016 edition of the best ski towns in America.