Not all ski resorts shut down when the winter season ends. Quite a few stay open throughout the year, giving tourists something to do in the summer months and nearby communities a much-needed economic boost. In fact, in the state of Colorado alone, the ski industry brings in over $4 billion per year. If you’d like to ski and breathe fresh mountain air on a daily basis, you’ll love our list of the best ski towns to live in.

This is SmartAsset’s third annual study of the best ski towns in America. Read the 2015 study here.

Our study looks at the same seven metrics that we included in the 2015 version of our analysis. Many of the factors we considered assess the standard of living in 128 cities and towns located near a ski resort. Specifically, we focused on the summer and winter unemployment rate, the concentration of dining and entertainment establishments, housing affordability and the median household income in each town.

We also ranked each town using the PAF score created by zrankings.com. It rates ski resorts based on several factors like acreage and summit elevation. PAF stands for “Pure Awesomeness Factor.” (You can read our full methodology below.)

Moving to the mountains? Figure out your finances with SmartAsset’s free mortgage calculator. 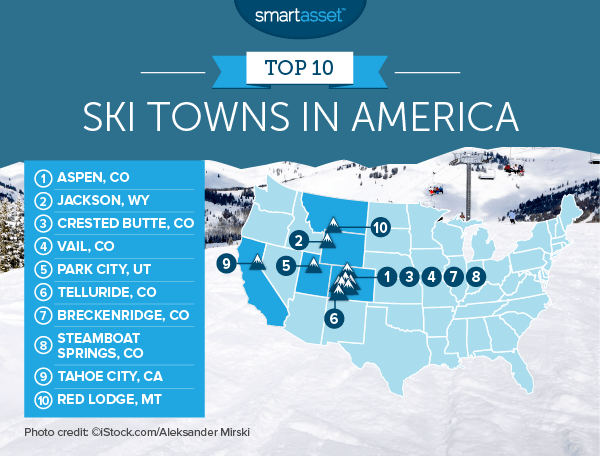 Aspen ranked second in last year’s analysis and third in 2014. Since the first edition of our study, the city’s unemployment rate has fallen quite a bit. In January 2016, just 2.2% of Aspen’s population was unemployed.

While Aspen has a number of world-renowned ski resorts, one that’s particularly popular is the Aspen Snowmass. The 3,132-acre resort has 20 ski lifts, three terrain parks and 150 miles of trails.

Jackson, Wyoming offers skiers and snowboarders the best of both worlds: a top-notch ski resort and a high quality of life. A typical resident spends only 21% of their household income on housing-related expenses.

According to 2015 data from zrankings.com, Jackson’s biggest ski resort (called the Jackson Hole Mountain Resort) is the highest-ranking ski resort in North America. The resort has five terrain parks, a 100-passenger aerial tram and a 4,139-foot vertical drop. Regardless of your skill level, there’s something for everyone.

Crested Butte is located about 228 miles from Denver (by car). The town was once the center of Colorado’s coal mining industry. Now it’s known for being a great winter vacation destination for outdoor enthusiasts who enjoy mountain biking, skiing or horseback riding in the snow.

The Crested Butte Ski Resort offers wellness retreats, zipline tours and an adventure park with a climbing wall and a golf course. When you need a break from the snow, you can warm up in one of the local dining establishments. For every 10,000 residents, there are about 69 bars and restaurants and 46 entertainment-related businesses.

The Vail Ski Resort ranks as the fifth-best ski resort in North America and the best resort in Colorado, according to 2015 data from zrankings.com. It’s also one of the largest ski resorts in the world. It covers 5,289 acres of terrain and has 31 ski lifts and 193 total runs. On average, Vail receives 358 inches of snow per year, making it the perfect place to visit or live in when the temperature drops.

Although it’s a small town, Park City, Utah is one of the wealthiest places in America. A typical resident has about $70,798 left over after paying for housing costs like homeowners insurance and property taxes.

Besides being a ski town, Park City is recognized for its thriving art scene and its food. Its galleries often feature works of art from around the world and locals and tourists have access to more than 150 bars and restaurants.

There’s more than one explanation for how the town of Telluride got its name. But most say its name comes from tellurium, an element found throughout the state of Colorado that’s often connected with the production of gold and silver.

Today, many people associate Telluride, Colorado with the Telluride Ski Resort. The 2,000-acre resort is actually located in Mountain Village, a town that’s adjacent to Telluride.

Breckenridge has moved up a spot on our list. Last year, it ranked as the eighth-best ski town. Part of the area’s appeal centers around the Breckenridge Ski Resort, which offers outdoor activities year round.

Anyone who loves skiing might want to consider moving to Colorado and living in Steamboat Springs. In addition to having a low unemployment rate, the town is the home of the Steamboat Ski Resort, which stretches across an entire mountain range. The median household income in Steamboat Springs is $54,218 and the typical resident spends 28% of their annual income on housing expenses.

Tahoe City is the only place in California to rank in the top 10. But with only a few thousand people in the city and the area surrounding it, Tahoe City feels more like a small town. There are a number of ski resorts within miles of the city, including the Squaw Valley Ski Resort and the Homewood Ski Resort.

Though the resorts near Tahoe City are located in California, don’t be fooled. They receive plenty of snow. The Alpine Meadows Resort, for example, gets 30 feet of snow per year, on average.

Red Lodge is a fairly affordable place to live. The typical resident spends only one-fifth of their annual income on housing costs. Locals can spend time at the Red Lodge Mountain Resort, which covers 1,600 acres of terrain and has a 2,400-foot vertical drop. They can also take a walk beside the Wild Bill Lake, hike along the Lake Fork Trail and check out any of the art galleries nearby. 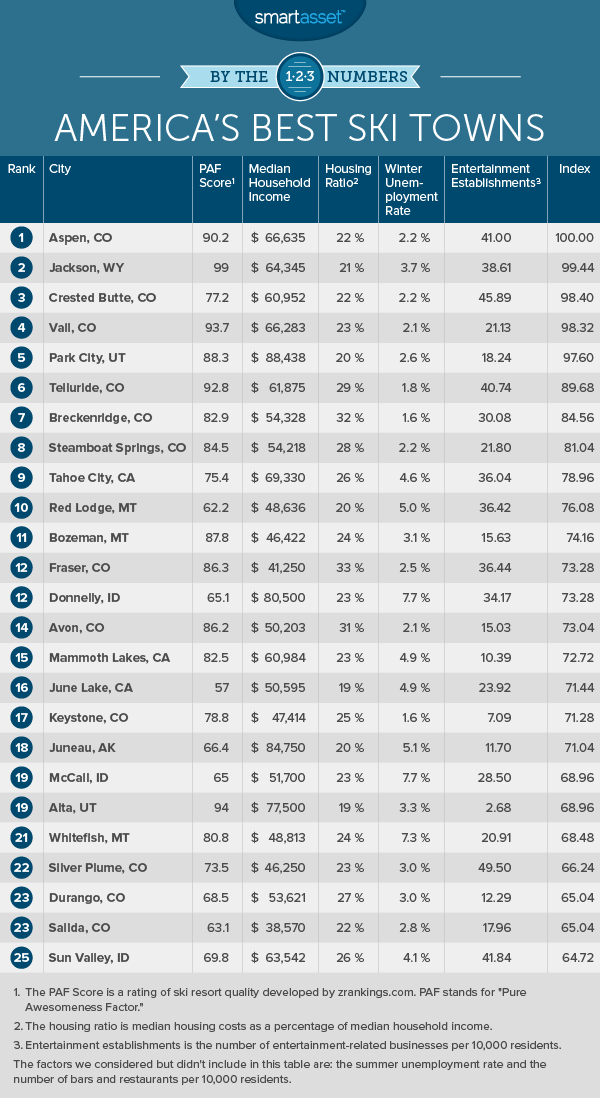 For the third year in a row, SmartAsset looked at the best ski towns to live in. We ranked 128 cities and towns within miles of a ski resort across the following six factors to gauge local quality of life:

We also took PAF scores into consideration. Also known as the “Pure Awesomeness Factor,” this metric is based on an annual ranking of ski resorts in North America developed by zrankings.com for 2015. It’s made up of five different factors, including the number of lifts each resort has, average snowfall and vertical drop.

When we ranked each of the cities and towns in our study across all seven metrics, we gave full weight to most of the factors, double weight to the PAF score and half-weight to the summer unemployment rate and our housing affordability ratio. Then we averaged our rankings and gave each ski town a score between 0 and 100. The town with the highest average ranking scored a 100.