Where Seniors Are Increasingly Staying in the Workforce – 2021 Edition 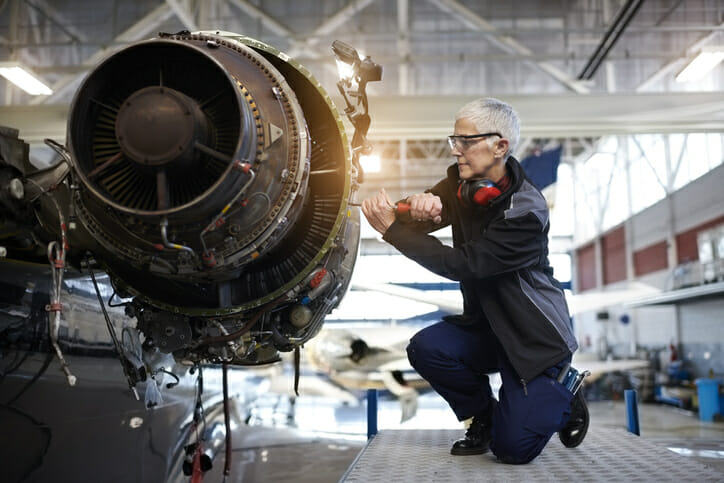 The traditional retirement age of 65 is not a universal benchmark, especially for many older workers who are staying in the workforce beyond this age. The Social Security Administration has set the full retirement age for workers born in 1960 or later at 67. Furthermore, the U.S. Bureau of Labor Statistics projects that 33.2% of workers between the ages of 65 and 74, as well as 11.8% of those 75 and older, will still be working in 2029. With all this in mind, SmartAsset identified and ranked the cities where seniors are increasingly staying in the workforce for 2021.

To do so, we examined labor force participation rates for the 100 largest cities in the U.S. from 2014, 2018 and 2019 to see the rate of change. For details on our data sources and how we put all the information together to create our final rankings, check out the Data and Methodology section below.

This is SmartAsset’s second study on where seniors are staying in the workforce. You can find the 2020 version here. 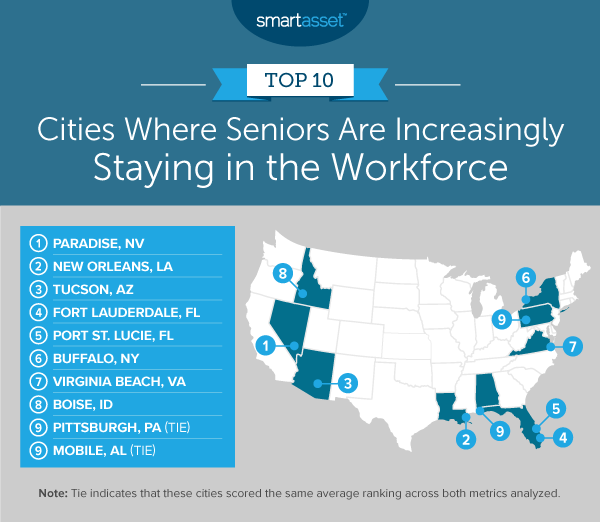 New Orleans ranks second with the highest five-year change in the labor force participation rate (7.5%). The rate also jumped 5.9% in one year, the fourth-highest in this study.

The senior labor force participation rate for Tucson grew 6.7% in five years up to 20.6% in 2019, the third-highest five-year increase in this study. The city also grew 6.1% in one year, ranking third for this metric as well.

The Port St. Lucie senior labor force participation rate jumped by 6.2% between 2015 and 2019, the fifth-highest five-year increase in this study. The rate also grew 2.6% in one year, the 18th-highest increase for that metric.

The senior labor force participation rate in Pittsburgh grew 4.7% between 2014 and 2019. This is the 11th-highest increase over a five-year period. The Steel City also had the 17th-highest one-year change, growing 3% since 2018.

Mobile’s senior labor force participation rate grew 4.5% between 2014 and 2019, the 12th-highest change in this study. The rate also grew 3.1% in one year, the 16th-highest rate for this metric in the study. 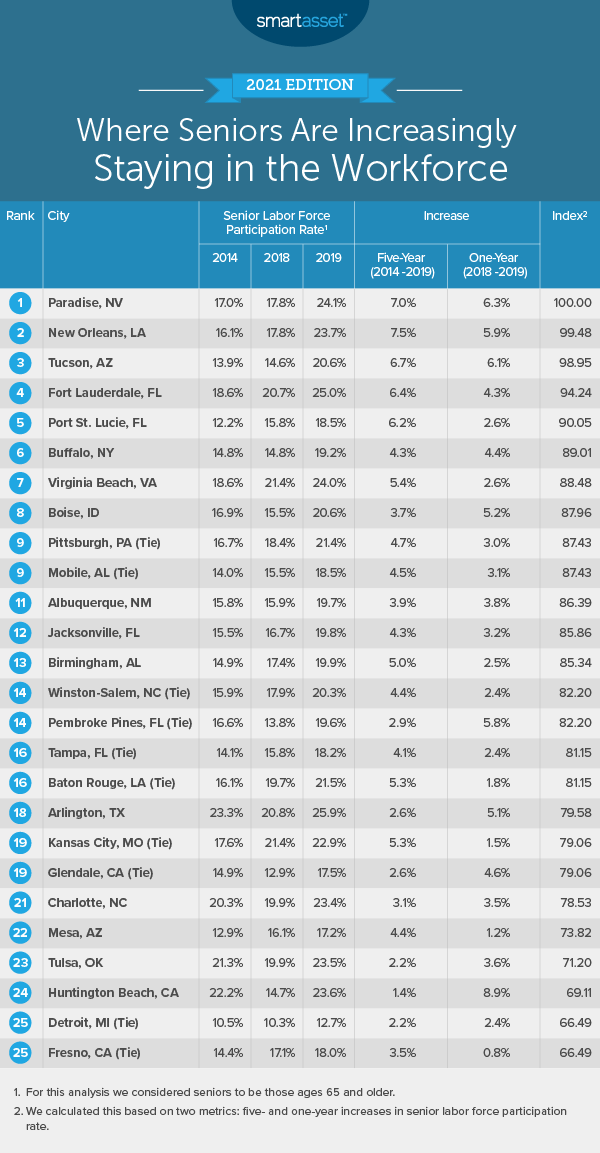 To rank the cities where seniors are staying in the workforce, SmartAsset analyzed data from the 100 cities in the country with the largest senior populations. Specifically, we looked at the following two factors:

We ranked each city based on its increase from 2014 through 2019 and on its increase from 2018 to 2019. We then found each city’s average ranking across the two metrics. We produced a final ranking based on these averages. The city with the highest average ranking was given an index score of 100, and the lowest was given an index score of 0.