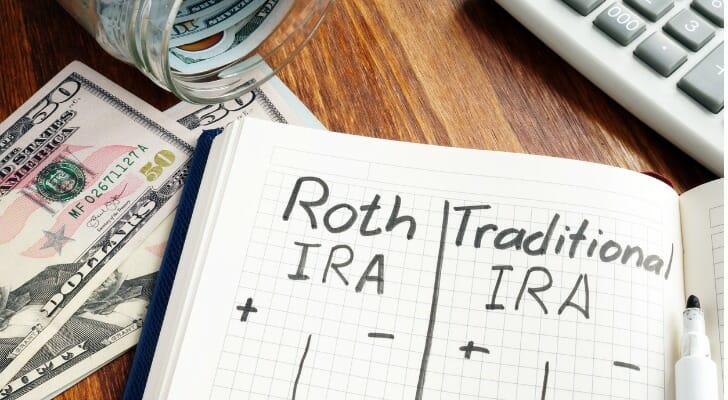 When saving for retirement, you’ll typically have two choices for how you’ll fund your IRA. With a traditional IRA, you’ll contribute pre-tax dollars that will grow inside the account tax-free and be taxed when the money is withdrawn. A Roth IRA, however, taxes your initial contribution so that you don’t have to pay taxes when you withdraw your savings.

A financial advisor can help you manage your savings and plan for retirement. Find a local advisor today.

The difference between these two savings vehicles is simple enough, but figuring out which is better for you isn’t so cut-and-dried. The answer ultimately depends on whether your tax rate in retirement (or whenever you start withdrawing your funds) will be higher than it is currently. While lower- to moderate-income workers may opt for a Roth IRA because they expect to be in a higher tax bracket when they start withdrawing their retirement savings, higher earners may anticipate being in a lower tax bracket in the future, making the traditional IRA the better option.

Also, keep in mind that traditional IRA contributions are tax deductible and reduce a person’s annual tax bill, a benefit the Roth option does not provide. Remember there are income limits for those contributing to Roth IRAs: for tax year 2021, a single person must have a modified adjusted gross income (MAGI) under $140,000 and a married couple filing jointly must have a MAGI under $208,000. For 2022, those limits rise to $144,000 and $214,000, respectively).

To see how a traditional and Roth IRA stack up against each other, we compared two variations across three different tax scenarios. For each, we calculated how much a person is left with 30 years after contributing $6,000 to traditional IRA and a Roth IRA. We assumed an 8% annual rate of return in each scenario, and looked only at federal tax brackets, as state income tax varies. (In each of the scenarios, for simplicity, we assumed a lump-sum withdrawal rather than gradual distributions.)

In our first scenario, we examined the difference between a traditional IRA and a Roth account if a person’s tax rate (22%) is the same at age 60 as it was 30 years earlier. Someone who contributed $6,000 to a traditional IRA at age 30 would see her money compound at a greater rate over the next three decades compared to a Roth IRA. That’s because income tax would reduce the Roth contribution to $4,680, while the full $6,000 could grow within the traditional account. 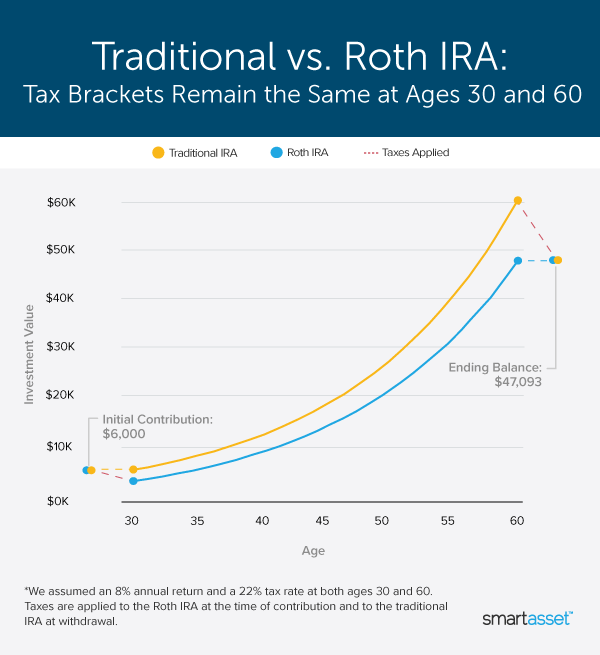 The bottom line? If your tax rate is the same at the time of withdrawal as it was when you contributed to your IRA, it won’t matter which option you choose.

What if a person’s wages grow exponentially between ages 30 and 60? Someone who was in the 22% tax bracket when she was 30 may be in the 32% tax bracket three decades later. This is when a Roth IRA really pays off.

Income taxes will take a substantial bite out of the person’s traditional IRA at age 60, whittling the account down to $41,056. However, had the same person used a Roth account, her tax bill would have already been paid, allowing her to withdraw all $47,093. By using a Roth account, the person would come out roughly $6,000 ahead. 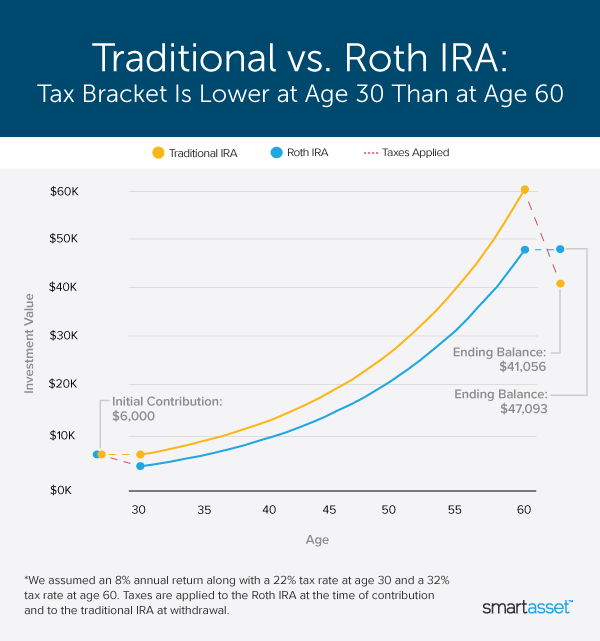 Not everyone ends up in a higher tax bracket by age 60, though. Perhaps someone who was in the 24% bracket at age 30 is no longer working full time at 60, placing her in the 22% bracket. With a Roth IRA, the person would contribute $4,560 to her account after taxes at age 30 and watch her nest egg grow to $45,886. However, she would end up with slightly more money by age 60 had she contributed to a traditional IRA 30 years earlier. After paying taxes, the person would be left with $47,093 in their traditional IRA, making it a marginally better option. 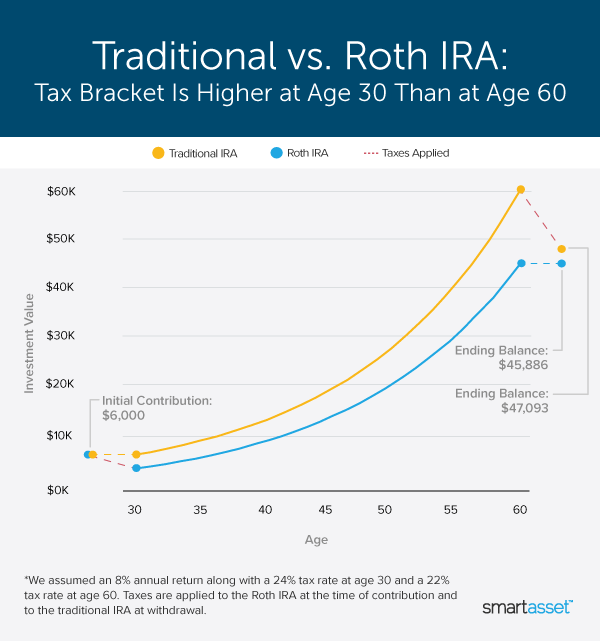 When comparing a traditional IRA and Roth IRA, a person’s initial and future tax rates will determine which option is more advantageous. While our three scenarios illustrate how different tax rates can affect a person’s eventual withdrawal, it’s important to understand that our simulations are based on several assumptions that may not apply to everyone’s financial situation, including specific tax brackets.

Not only are tax rates subject to potentially change in the future, our analysis doesn’t consider state income taxes, which may play a significant role in whether a person opts for one account over the other. In the end, choosing between a traditional and Roth IRA is a complicated financial decision best made with the help of a financial advisor.