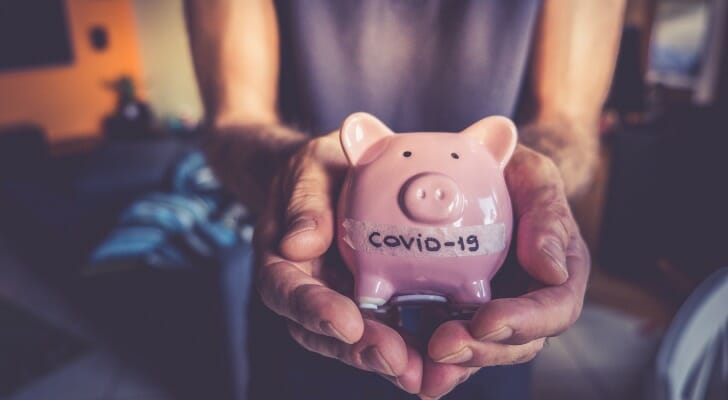 Despite various government relief programs, the coronavirus crisis has already affected the finances of many Americans. Over the past eight weeks, more than one in four individuals filed for unemployment. Though unemployment benefits are expanded under the CARES Act, enhanced benefits are scheduled to end on July 31, 2020. Additionally, though many businesses say they will rehire workers as the virus becomes contained, University of Chicago economists have theorized that more than 40% of recent layoffs will result in permanent job loss. Beyond unemployed workers, Americans who are still working may face financial pressure as well. According to a National Endowment for Financial Education (NEFE) April 2020 survey, nearly nine in 10 Americans say the COVID-19 crisis is causing stress on their personal finances.

Like the spread of the virus, financial shocks have been felt more in some places than others. In this study, SmartAsset looked at the states where residents have been financially hurting the most during COVID-19. We compared the 50 U.S. states across six metrics. They include recent measures of unemployment along with measures of housing and food insecurity. For details on our data sources and how we put all the information together to create our final rankings, check out the Data and Methodology section below. 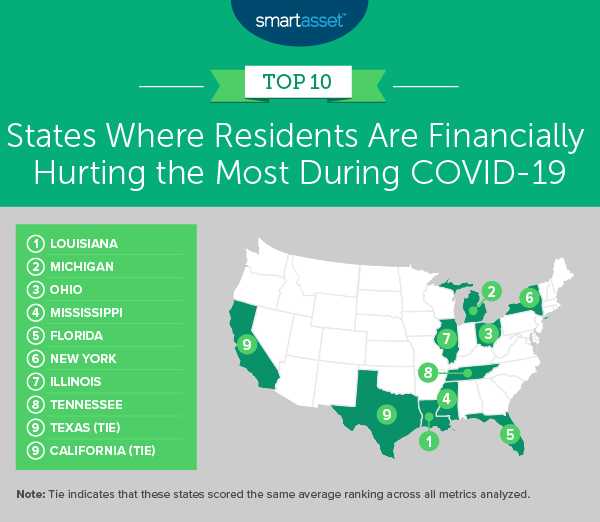 Residents in Louisiana have been hit hard financially during the coronavirus pandemic. With the third-highest poverty rate in the nation, close to 16% of adults in Louisiana recently did not have enough food over the course of a week. Additionally, Louisiana had the 12th-highest percentage of residents, at approximately 29%, report that they either missed last month’s rent or mortgage payment or were not confident that they could make next month’s payment on time.

Unemployment and food insufficiency in Ohio have been high in recent months according to BLS and Census data. The unemployment rate in April 2020 was 16.8%, the sixth-highest of all 50 states. Moreover, in mid-May, 12.8% of residents reported that they either sometimes or often did not have enough to eat during the previous seven days. This is the fifth-highest rate of residents reporting food insufficiency.

In 2018, 19.7% Mississippi residents fell below the poverty line, the highest percentage of residents for this metric in any state. The coronavirus pandemic seems to have exacerbated some common measures of poverty within the state. According to Census Bureau survey data collected in mid-May, more than 46% of adults reported that they either missed last month’s rent or mortgage payment or have slight or no confidence that their household can pay next month’s rent or mortgage on time. Moreover, close 18% of adults said that within the last week they either sometimes or often did not have enough to eat.

Historically, a high percentage of residents across many Florida cities have been housing-cost burdened. Housing burdens in Florida may be exacerbated due to COVID-19. According to Census Bureau data from the Household Pulse Survey, more than 32% of adults recently reported that they are facing housing insecurity, the second-highest rate of across all 50 states. Florida residents also reported the fourth-highest rate of food insufficiency during the same survey week.

Though an individual filing for unemployment in New York could receive a weekly benefit of up to $504, the average benefit is $417. With the average worker earning about $800 per week, the pandemic unemployment replacement rate (with the additional $600) is 127%, the seventh-lowest in our study. More than one in eight New Yorkers may be currently filing for unemployment. April 2020 BLS data shows that 14.5% of New York’s labor force is unemployed. This marks a 10.8 percentage point increase from pre-COVID levels.

Unemployment in Illinois rose sharply between February 2020 and April 2020, increasing by 13.0 percentage points, the eighth-largest jump in our study. With that rise, Illinois’ April 2020 unemployment rate was 16.4%, 1.7 points higher than the national average and the seventh-highest of all 50 states.

Despite low historic poverty rates, recent survey data compiled on residents in Illinois shows a different picture. More than one in four adults recently reported housing insecurity, while about one in eight were experiencing food insufficiencies.

In 2018, Tennessee had the ninth-highest poverty rate of all 50 states, with 15.3% of residents falling below the federal poverty line. Economic changes due to coronavirus may exacerbate poverty within the state. Over the past two months, Tennessee saw the 14th-largest increase in unemployment, and its most recent unemployment rate from April 2020 (14.7%) is the 18th-highest in the nation. Recent survey data from the Census shows that close to 25% of Tennessee residents are housing insecure, while more than 11% are food insufficient.

Though the April 2020 unemployment rate in Texas was about two percentage points lower than the national rate, a high percentage of Texan residents have reported recent financial stress. In mid-May, more than 30% of residents said that they either missed last month’s housing payment or did not have confidence they would be able to make the coming month’s payment. Additionally, close to 13% of adult survey respondents said they did not always have enough to eat during the previous week. Relative to other states, that is the seventh-highest rate of housing insecurity and sixth-highest rate of food insufficiency.

To find the states where residents are financially hurting the most during COVID-19, SmartAsset looked at data for all 50 U.S. states. We compared them across six metrics:

Tips to Protect Yourself Financially From the Impact of Coronavirus