States Where Residents Are Financially Hurting the Most – 2022 Edition 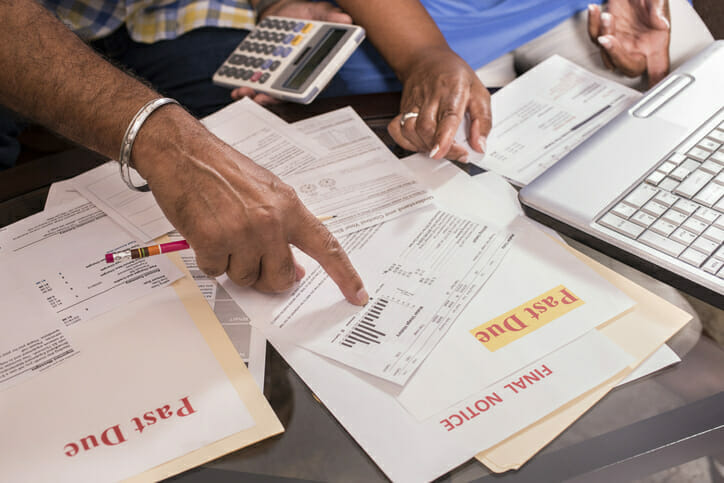 The Federal Reserve Bank of New York says that household debt went up roughly $1 trillion in 2021, which is the highest annual increase since 2007. Other studies estimate that the average household now owes more than $155,000. As Americans struggle to keep up with bill payments and afford basic necessities like food and housing, SmartAsset has analyzed data to identify and rank the states where residents are financially hurting most.

This is SmartAsset’s third annual study on the states where residents are financially hurting the most. Read the 2021 version here. 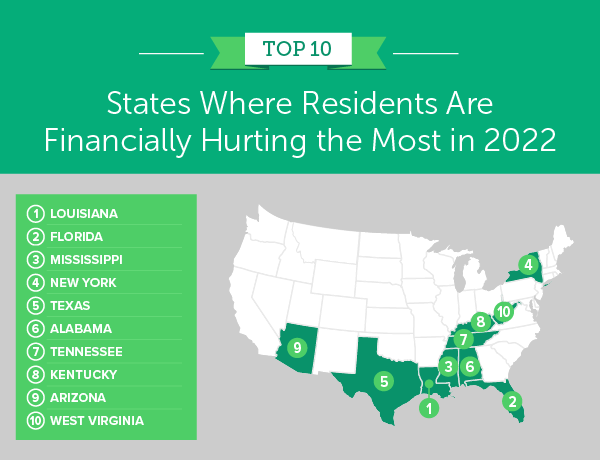 Residents of this Southern state hurt the most financially, ranking at the bottom of our study for a third consecutive year. The National Low Income Housing Coalition says there is a shortage of affordable rental homes in Louisiana for low-income households. This state ranks worst for residents experiencing recent housing insecurity (11.5%) and has the third-highest poverty rate (17.8%).

Florida ranks worse this year than last year, moving up from No. 8. Florida has seen a smaller decrease in the unemployment rate than other states (-0.7%) over the past year. It also ranks second-worst for the percentage of the population expressing recent housing insecurity (10.6%) and ties Louisiana for eighth-highest percentage of residents reporting recent food insecurity (11.9%).

Residents in Mississippi face the highest poverty rate in this year’s study (18.8%), with nearly one out of five living below the poverty line. Mississippi residents also rank highest for recent food insecurity (19.6%).

New York is the only Northeastern state in the bottom 10 and it ranks second for recent food insecurity (15.4%) and sixth for recent housing insecurity (9.0%). The Empire State also ranks fourth-highest for the unemployment rate as of December 2021 (6.2%). Despite this, New York does boast a 2.5% decrease in unemployment compared with one-year prior.

The most populous state in the bottom 10 improved slightly, dropping from third last year to fifth this year. The biggest difficulties that Texans face include housing insecurity (9.5%) and food scarcity (11.8%). The poverty rate (13.5%) and unemployment rate (5.0%) both rank 12th-worst.

For Alabama residents, the poverty rate has improved slightly from 15.5% in 2019 to 14.7% in 2020. However, the current rate still surpasses the national average. Additionally, Alabama ranks 11th-worst for the percentage of residents experiencing recent housing insecurity (7.2%) and 14th-worst for the percentage of residents facing recent food scarcity (11.0%).

Although Tennessee has an unemployment rate below the national average (3.8%), residents face a low unemployment benefit replacement rate (33%), ranking ninth for this metric in our study. In other words, average unemployment benefits cover only a third of the average worker’s weekly salary. Additionally, 7.0% of the population report recent housing insecurity and 10.3% report food insecurity.

The poverty rate in Kentucky is 14.8%, ranking sixth-highest for this metric in our study. Like Tennessee, 7.0% of Kentucky residents reported recent housing insecurity. Food scarcity is also an issue, affecting 11.6% residents in the state. The December 2021 unemployment rate for this state is 3.9%, which is a decrease of 1.7% compared to one-year prior.

Arizona jumped from ranking 17th place in our 2021 study to ninth this year. Residents here can expect an average weekly benefit amount (WBA) of $237. When compared with the average weekly wage ($789) in this state, this unemployment benefit accounts for just 30% of that wage, ranking second-worst in our study. The unemployment rate is just barely above the national average at 4.1% and the poverty rate sits at 12.8%.

This Southern state rounds out the bottom 10 with the third-worst food insecurity (15.2%) and the fourth-highest poverty rate (16.2%). Despite this, West Virginia has shown improvements over the past year: the unemployment rate (3.7%) fell below the national average (decreasing by 3%), which was the fourth-highest improvement across the country. Additionally, its overall rank in this study dropped to 10th from fifth place in 2021.

To find the states where residents are financially hurting the most, SmartAsset looked at data for all 50 U.S. states. We compared them across six metrics:

Tips for Handling a Financial Downturn