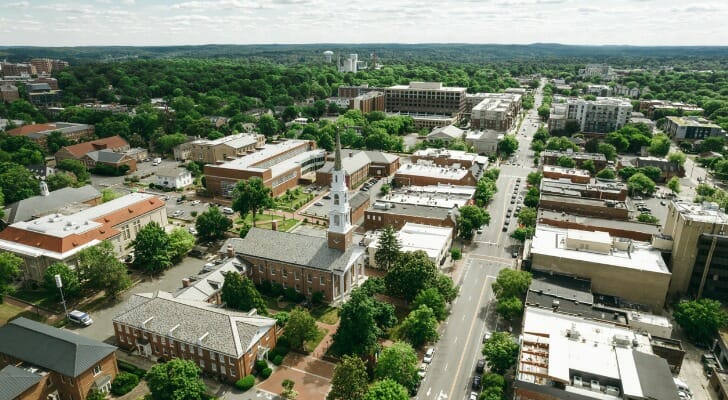 The closure of college campuses in 2020 stoked fears about whether college towns around the country could endure the economic instability wrought by COVID-19. The smaller the town, the more precarious the economic situation. A SmartAsset study from 2020 found that the 11 most vulnerable college towns all had populations of 125,000 or less. But despite the recent challenges, college towns have forged ahead and remain viable places to live and work.

To find the most livable college towns, we studied 116 cities and towns around the country and compared them across eight metrics: median household income; housing costs as a percentage of median household income; concentration of restaurants and entertainment establishments; average commute time; percentage of households with internet access; unemployment; property crime and violent crime. For details on our data sources and how we put all the information together to create our final rankings, read the Data and Methodology section below. 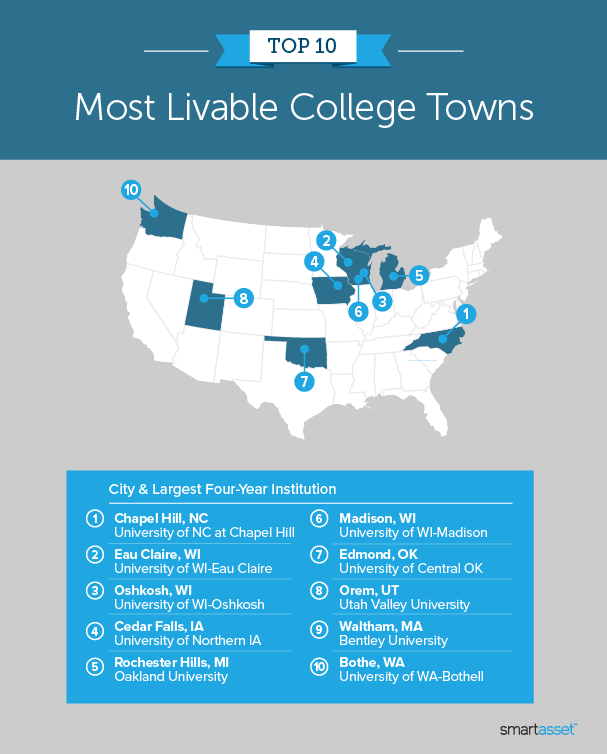 Home to the University of North Carolina, Chapel Hill takes the No. 1 spot. The college town ranks in the top 25 for seven of the eight metrics used in this study, including seventh-lowest violent crime rate. Chapel Hill also has the 22nd-highest median household income ($73,614) and 22nd-highest concentration of restaurants and entertainment establishments (11.03%). It has the 19th-lowest housing costs as a percentage of median household income (21.35%).

This town of 68,000 residents is home to the University of Wisconsin-Eau Claire and has the 16th-highest concentration of restaurants and entertainment establishments across our study (11.45%). Eau Claire also ranks eighth-best for relatively low housing costs as a percentage of median income (19.84%). Its average commute time of 16.2 minutes is 14th-best across our study.

Home to the University of Wisconsin-Oshkosh, this town of nearly 67,000 residents ranks highly for housing costs that are just 19.69% of the median household income, sixth-lowest across our study. Oshkosh also has the 12th-highest concentration of restaurants and entertainment establishments (11.95%). With a relatively low property crime rate (15th-lowest) and June 2021 unemployment rate (21st-lowest), Oshkosh is the No. 3 most livable college town according to our metrics.

With the University of Northern Iowa in town, residents of Cedar Falls benefit from commute times that average just 14.7 minutes (sixth-best) and housing costs that are only 19.11% of median household income, fourth-best across our study.

Home to Rochester University and Oakland University, this city of 74,000 residents has the lowest violent crime rate among all 116 towns in our study and the lowest housing costs as a percentage of median household income (17.18%). Rochester Hills also has the ninth-highest median household income ($93,953), second-lowest property crime rate and 13th-highest percentage of households with internet access (91.48%).

The third of three Wisconsin college towns in our top 10, Madison ranks particularly well for its 3.5% unemployment rate, 11th-lowest across our study. Home to the University of Wisconsin’s flagship campus, Madison has the 24th-highest concentration of restaurants and entertainment establishments (10.96%). Madison also ranks in the top 30 for median household income ($65,332), housing costs as a percentage of median household income (22.57%) and percentage of households with internet access (88.67%).

With the second-lowest unemployment rate (2.8%) and the fifth-lowest violent crime rate, Orem is among the top-rated college towns in the U.S. Home to Utah Valley University, Orem’s housing costs are just 20.49% of the median household income, 11th-best across our study.

This suburb of Boston, Massachusetts is home to both Bentley University and Brandeis University. Waltham has the eighth-highest median income ($95,964) and fourth-lowest property crime rate. The city also ranks in the top 30 for its low violent crime (19th overall) and housing costs as a percentage of median income (22.36%), 27th overall.

Located about 20 miles northeast of Seattle, Bothell is home to both the University of Washington-Bothell and Cascadia College. This city of nearly 46,000 residents has the fifth-highest median income across our study ($99,965) and second-lowest violent crime rate. Bothell is also sixth for the percentage of households with internet access (92.21%).

To rank the most livable college towns in America, SmartAsset pulled data for all U.S. cities with a population of at least 40,000 and at least one four-year college or university. We then looked at the total number of undergraduate students enrolled in local schools and taking in-person classes and compared that figure to the city population.

We found the towns where students made up more than 10% of the population, removing all other cities and towns from our list. This left us with a total of 116 college towns, which we compared across eight metrics: