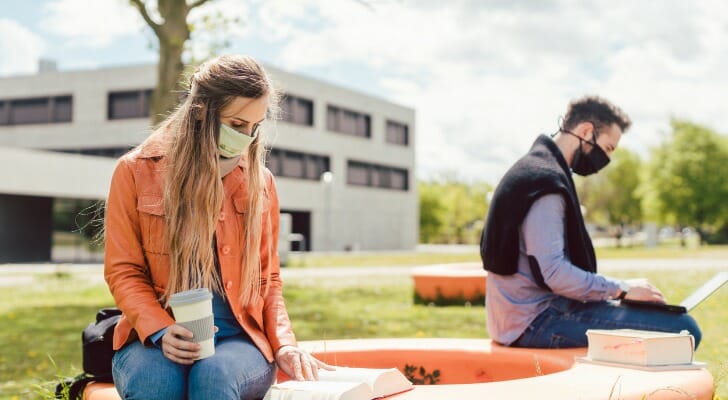 Though efforts to slow the spread of coronavirus across the U.S. have squeezed many local economies and the bank accounts of their residents, college towns are among the most vulnerable. They are confronting potentially major losses in population and revenue if students do not return to campus. Even in towns where schools have decided to allow students back in the fall, there may continue to be dampened demand for typical collegiate expenditures such as eating out and attending sports games.

In this study, SmartAsset uncovered places that are most dependent on the presence and spending habits of undergraduate populations. We compared 95 college towns with populations of 50,000 or more across six metrics. We looked at students as a percentage of the population, college staff as a percentage of workers, as well as four other metrics focused on local businesses’ reliance on college student and parent/guardian spending – concentration of restaurants & bars, entertainment establishments, bookstores and hotels. For details on our data sources and how we put all the information together to create our final rankings, check out the Data and Methodology section below. 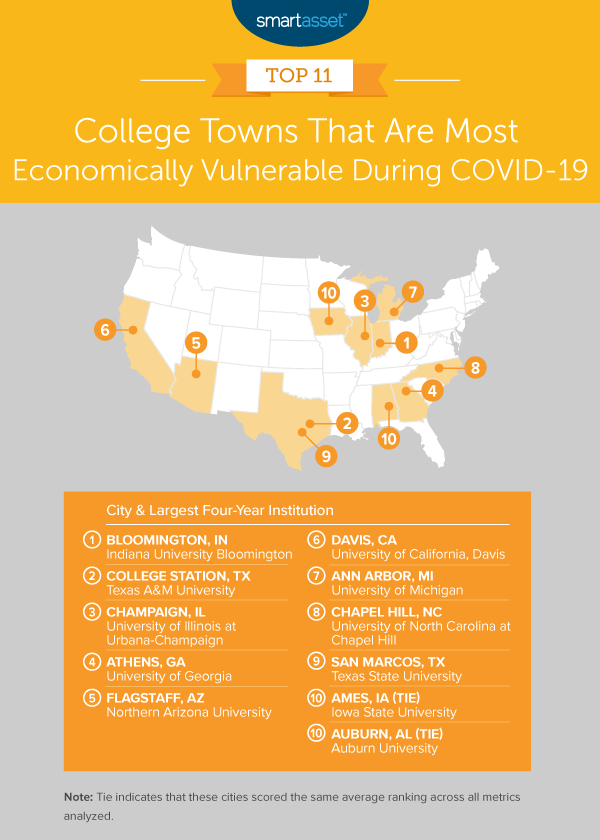 College Station, Texas has the second-largest college population in our study. In 2018, more than 44% of the city’s population was made up of undergraduates at Texas A&M University, according to data from the Integrated Postsecondary Education Data System (IPEDS) and the Census Bureau. Additionally, data shows that the town’s economy relies heavily on local restaurants and bars. The area has the 12th-highest concentration of restaurants and bars, at 9.27%, in our study.

Though the University of Illinois at Urbana-Champaign offers a plethora of online degrees, certificates and courses, many students exclusively take in-person classes. Data from IPEDS shows that during the 2018 school year, close to 21,900 undergraduates were taking exclusively in-person courses at the university. As a result, students make up more than 25% of the city’s population. Champaign may additionally be more vulnerable than other college towns during COVID-19 as it has the highest concentration of restaurants and bars in our study, at 11.26%.

In 2018, more than 31,000 undergraduates were enrolled at Northern Arizona University in Flagstaff, Arizona. Of those, about 16,000 students were enrolled in only in-person classes. Thus, we found that college students taking in-person courses make up 22.45% of the Flagstaff city population.

Northern Arizona University has announced it will resume in-person classes in the fall, but fewer parents and friends visiting the campus may affect the hotel industry. Flagstaff has the highest concentration of hotels in our study. Close to one in 25 establishments in the area is a hotel or motel.

Davis, California is home to the University of California, Davis – the third largest school within the University of California system, following the Los Angeles and Berkeley campuses. IPEDS data shows that most of the university’s 38,000-plus undergraduates take in-person classes. In 2018, about 29,200 undergraduates exclusively took in-person classes and made up close to 43% of the city’s population – the third-highest percentage in our study.

The city of Davis is even more vulnerable to the negative effects of COVID-19 due to its high concentration of restaurants, bars and hotels, as the local economy relies on revenue brought in by college students and their visitors. Specifically, more than 9% of establishments are restaurants or bars, and about 1% are hotels or motels.

Though the University of Michigan is the largest four-year university in Ann Arbor, Michigan, the city is also home to Concordia University, Ann Arbor – a satellite campus of Concordia University, Wisconsin. Between the two universities, undergraduate students make up almost 26% of the city population – the 16th-highest percentage in our study. Additionally, Ann Arbor has the sixth-highest rate of college staff as a percentage of workers; more than one in three full-time workers is employed by either of the local universities.

Chapel Hill is part of North Carolina’s Research Triangle, along with the cities of Raleigh and Durham. The undergraduate population in Chapel Hill is significant: More than 28% of city residents are undergraduate students taking in-person courses at the university. Additionally, the employment of many workers in the city is tied to the university. Almost 45% of full-time workers in the city are college staff, including faculty, research assistants and other staff.

Iowa’s largest state university is in Ames, Iowa – a city in Story County and located about 30 miles north of Des Moines. Ames may be more vulnerable to COVID-19 and its effects than other college towns, as students make up more than 35% of the city’s population. Additionally, close to one in five workers in the area is employed by the university. Regarding the local economy, more than one in 10 establishments are restaurants and bars or entertainment establishments.

Auburn, Alabama ties with Ames, Iowa as the 10th most vulnerable college town during COVID-19. Auburn has the eighth-highest percentage of students relative to the population (30.36%) and 15th-highest percentage of college staff relative to workers (19.26%). Additionally, it ranks in the worst fifth of college towns for its concentration of restaurants and bars and concentration of hotels.

To find the college towns that are most vulnerable during COVID-19, SmartAsset pulled data for all U.S. cities with a population of at least 50,000 and at least one four-year college or university. We then looked at the total number of undergraduate students enrolled in local schools and taking in-person classes and compared that figure to the city population.

We found the towns where students made up more than 10% of the population, removing all other cities and towns from our list. This left us with a total of 95 college towns, which we compared across six metrics:

Tips for Managing Your Student Loans