Largest RIAs Nationally and in Each State – 2021 Study 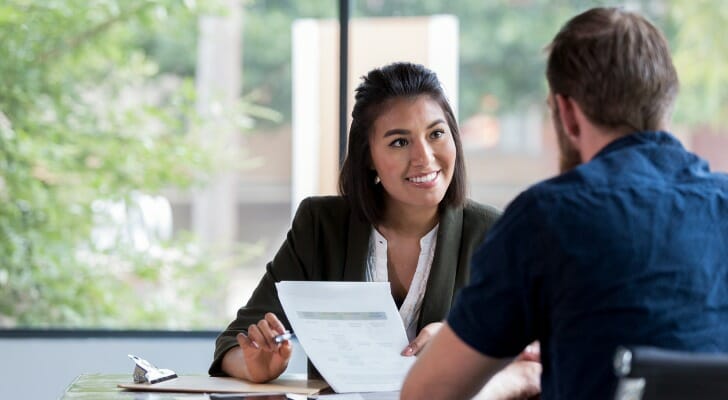 Over the past decade, the total number of U.S.-based registered investment advisors (RIAs) has increased by 20.29%. Total assets managed by RIAs have grown at an even steeper rate, more than doubling over the same period. Assets managed by Securities and Exchange Commission (SEC) RIAs rose from $43.8 trillion in 2010 to more than $110 trillion in 2020, according to figures reported by the Investment Advisory Associations.

With the asset management industry growing so quickly, SmartAsset took a closer look at where the largest RIAs are headquartered. In this study, we identified the largest RIAs in the U.S. along with the largest RIA headquartered in each U.S. state. To do so, we considered SEC data as of September 2021, which includes assets under management (AUM) and headquarter location. For more information on our sources and how we put our findings together, read our Data and Methodology section below.

Largest RIAs in the U.S.

As previously noted, the Vanguard Group is the largest U.S.-based RIA. There are five additional RIAs with at least $2 trillion in AUM, three of which are headquartered in California. The table below lists the top 10 largest RIAs in the U.S., along with the city and state in which they are headquartered. 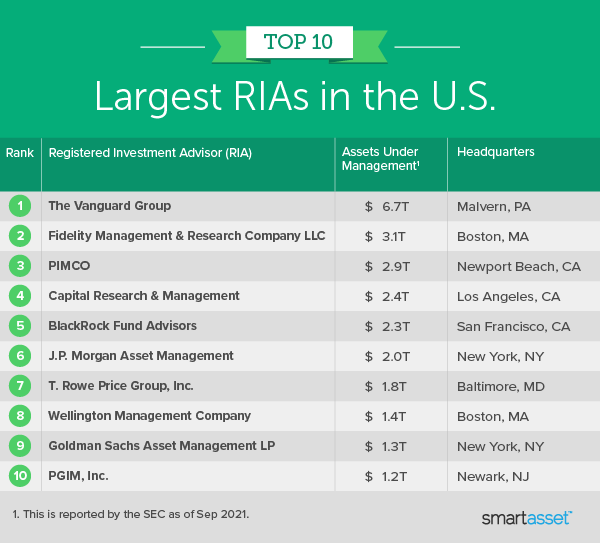 Largest RIA Headquartered in Each State

In 15 states, the largest RIA headquartered in the state has between $100 billion and $1 trillion in assets managed. Close to half of these states are in Southern states, including Georgia, Texas, Tennessee, Missouri, North Carolina, South Carolina and Florida.

There are 16 states that are home to RIA headquarters for firms managing between $10 billion and $100 billion in assets. Vermont is the only Northeast state in this group, with the other 14 states being concentrated in the West, Midwest and South (according to Census regional divisions). Western states include Arizona, New Mexico, Utah, Oregon, Montana, Wyoming and Nevada; Midwestern states include Kansas, Ohio, Nebraska and Indiana; and Southern states include Delaware, Virginia, Alabama and Arkansas.

Data for this report comes from the Securities and Exchange Commission (SEC) and is as of September 2021. We ranked U.S.-based registered investment advisors (RIAs) according to assets under management. We did not include U.S. territories.