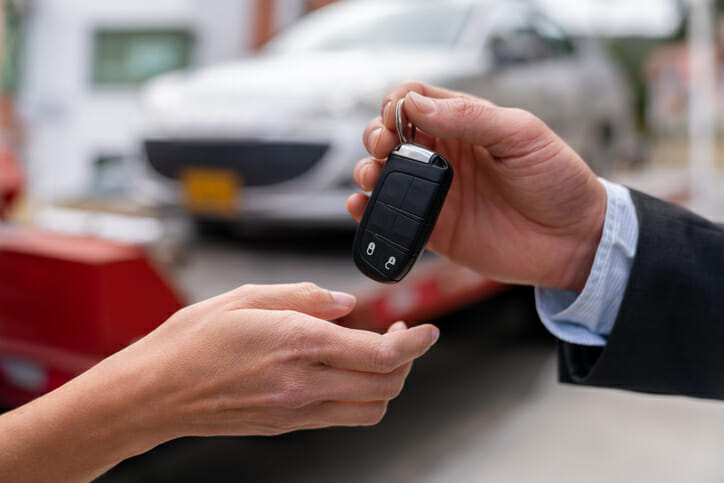 Many Americans choose to buy used cars as a cost saving mechanism rather than investing in a new vehicle. In fact, in 2020, over 40 million used cars were sold in the U.S. compared to 14.6 million new cars. But even with a used vehicle, the first year of car ownership can be a pricey endeavor when factoring in purchase costs as well as recurring costs.

In this study, SmartAsset crunched the numbers to find the states where the first year of car ownership is most affordable. With used car sales occurring roughly 2.5 times more than new car sales annually, we focused on the associated costs for a used car. We considered six metrics to calculate our ranking: upfront costs (estimated 10% down payment and registration fees) and annual recurring costs (loan payment, auto insurance, gasoline spending, and maintenance & repair costs).

Though our estimates are comprehensive, they do not account for car costs that are unexpected or specific to the car owner. Below we also discuss additional costs that may come up when owning a car. For more information on our data sources and how we put all the information together to create the final rankings, read our Data and Methodology section below. 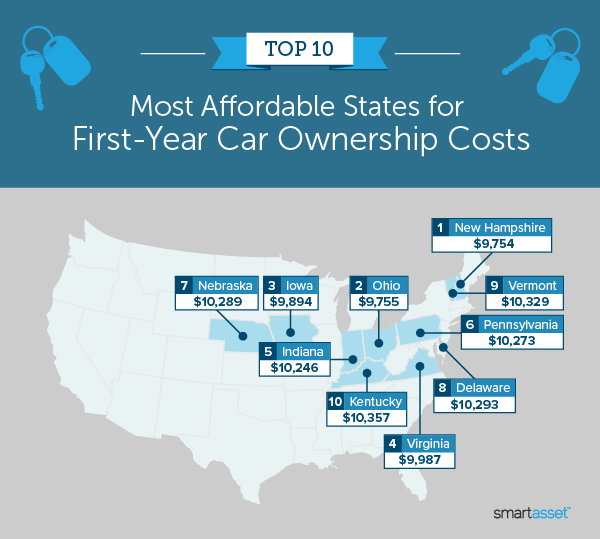 This New England state topped the list with the most affordable first year of car ownership costs, according to the six metrics we considered. The average first year cost of car ownership is $9,754. As residents in this state benefit from no state sales tax, a 10% down payment on the average used car in the state ($24,104) amounts to $2,410. Additionally, yearly gas spending ranks third-best in our study at $1,486.

In the state that was home to the famous Wright brothers, pioneers of aviation transportation, Ohio ranks second for another mode of transportation: motor vehicles. For first year car ownership costs, the state has the lowest average annual maintenance and repair costs ($342). Additionally, it ranks second-best for upfront costs ($2,387) and third-best for annual car loan payment ($4,546).

The second Midwestern state to make the top 10, Iowa’s average first year car ownership cost is $9,894. In a year, an Iowa resident can expect to pay the least for auto insurance ($629), which translates to 1.02% of the annual median household income. Other recurring costs are also low. The average annual loan payment is $4,680 (seventh-lowest) and average maintenance and repair costs are $353 (sixth-lowest).

At $9,987, Virginia is the last state in our study to boast first year ownership costs below $10,000. The Old Dominion state also ranks fourth-best for both upfront costs ($2,397) and annual loan payment ($4,553). For other annual costs, Virginians can expect to pay about $1,800 on average for gasoline annually and about $849 for auto insurance.

We estimate that the first year of owning a car in Indiana costs around $10,250. This Great Lakes state ranked in the top 10 across four out of six metrics: lowest for the upfront down payment and registrations costs ($2,371), second-lowest for annual loan payment ($4,541), fifth-lowest for maintenance and repair costs ($352) and sixth-lowest for auto insurance ($737).

A state where the law prohibits car sales on a Sunday, residents of Pennsylvania can expect to pay $2,527 upfront on a used vehicle car purchase with an annual loan payment of $4,812. Another annual cost: gasoline will cost an average of $1,585 annually, which ranked fourth for that metric in our study. In total, the first year of car ownership costs $10,273 in this Mid-Atlantic state.

Another Midwestern state that made the top 10 in our study boasts a first year car ownership cost of $10,289, according to our estimates. For a used car, it will cost on average $23,725. Nebraska also ranked seventh-best for annual auto insurance costs ($746). For other annual recurring costs: residents of Nebraska can expect to pay $4,837 on their loan, $1,818 for gasoline and $369 for maintenance and repair.

One of the five states without a sales tax, Delaware ranked in the top 10 not just for overall first year car ownership costs ($10,293), but also has the lowest annual loan payment ($4,536), third-lowest upfront costs ($2,387) and fifth-lowest estimated annual gas spending ($1,598). However, when it comes to annual auto insurance costs Delaware ranks in the bottom fifth of state, with an average cost of almost $1,400.

Vermont, the second New England state and second-least populated in the U.S., ranks fourth-best for annual auto insurance costs ($699) and eighth-best for annual maintenance and repair costs ($357). Annual auto loan payments ($4,923) are the highest of the top 10 states in this study. On average, the annual gasoline cost is $1,726. Overall, residents of Vermont can expect to pay roughly $10,330 in their first year of car ownership.

Known as the home of the American sports car, Kentucky is the final state in our top 10. We estimate that the first year of car ownership will cost an average of $10,357. This state ranked seventh-best for upfront costs ($2,458) and ninth-best for annual loan payments ($4,711). Driving will run a Kentucky resident $1,910 on average in gasoline and they can expect to pay $378 in maintenance and repair costs in the first year of ownership.

Apart from the six metrics we examined, owners may need to pay for several other car-related expenses. Though we accounted for registration fees, some localities and dealerships also charge emissions testing fees and delivery charges.

Maintenance costs can also vary significantly depending on the age of the vehicle and it is important to have regular check-ups to keep your car well maintained. Paul Sherman, an auto expert from olive.com, says that “by having annual maintenance on your car, you can detect potentially costly problems before they become catastrophic” and subsequently keep costs down.

Finally, car owners should also account for traffic and parking tickets, towing costs, and roadside service plans when planning out their budget. Additionally, you could experience expenses caused by forces outside of your control like vandalism, theft or even weather events such as hail and falling debris. Finally, with over 6 millions car accidents occurring yearly, there could be unexpected costs that arise depending on the severity of the damage and it is important to have an emergency fund should such costs arise.

To determine the average first year cost of owning a car in each state, we looked at data on all 50 states. SmartAsset compared the states across six metrics spanning two categories:

Total costs in each category were added together to calculate the final first year of ownership cost. States were ranked in ascending order according to the first year cost.