Best States to Own an Electric Vehicle – 2022 Study 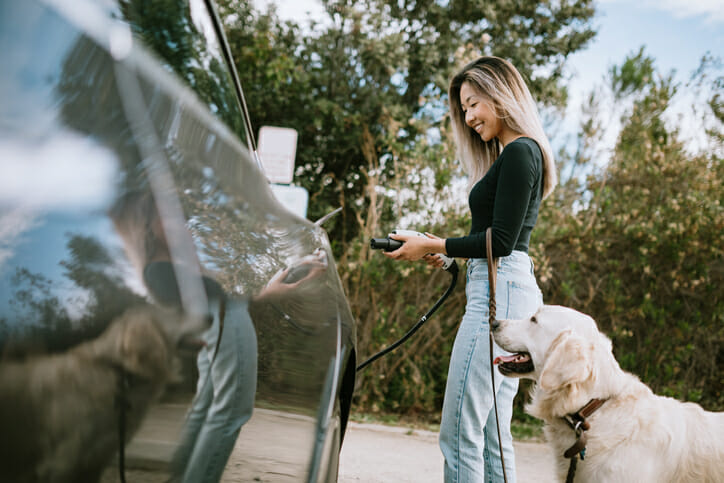 Between 2014 and 2019, electric car sales increased by 174.8%. Among the commonly cited reasons for considering an electric vehicle purchase, 30% of respondents in a 2021 Forbes survey cited the reduced cost of fuel. With the national average for gasoline hovering around $5, there might be even more incentive to purchase an alternative fuel vehicle now.

In this study, SmartAsset analyzed data for all 50 states and the District of Columbia to find the best states to own an electric vehicle. We considered six metrics across topics such as prevalence, fees and savings of electric vehicles, along with access to charging on the go. For more information on our data sources and how we put all the information together to create the final rankings, read our Data and Methodology section below.

The Golden State not only takes the first spot overall, but also claims the top ranking for the percentage of car registrations in the state that are electric (3.05%) and the number of incentives to own an alternative fuel vehicle (33). California residents also need not worry about running out of juice on the go, with nearly 35 charging stations for every 1,000 road miles. Annually, we estimate that owners of electric vehicles can expect to save nearly $2,200 on fuel costs compared to gasoline vehicles.

The nation’s capital offers the highest concentration of electric charging stations (73 for every 1,000 miles). The District of Columbia is also one of 21 places in our study that does not charge an annual fee for owning an electric vehicle. Owners of electric vehicles in the District save roughly $2,100 annually relative to gas vehicle owners, which ranks ninth for this metric.

In Oregon, electric vehicle owners can save an estimated $2,375 on traditional gasoline fuel costs (which takes the second spot for this metric). Oregon also has the fourth-highest percentage of car registrations that are for electric vehicles (1.61%) and the seventh-highest number of state incentives (10).

Nevada electric car owners benefit from no annual fee on owning an electric vehicle and the third-highest estimated annual fuel cost savings ($2,303). There are roughly 11,100 electric vehicles registered in the state, making up 1.08% of all registrations. Residents with these alternative fuel vehicles can access six state incentives, which ties for 16th-highest for this metric.

Arizona, the fifth Western state in the top 10, ties for the fourth-highest number of electric vehicle state incentives (11). Residents who own electric vehicles can expect to save roughly $2,200 in fuel costs annually (sixth-highest) and have access to roughly six charging stations for every 1,000 road miles (18th-highest). There is also no annual fee for owning an electric vehicle in this state.

Like Arizona, Maryland also has 11 state incentives for electric vehicle owners and no annual fee for ownership. The state offers the sixth-highest number of charging stations per capita (roughly 16 for every 1,000 road miles). Fuel cost savings between charging an electric vehicle at home and fueling a traditional gasoline car is roughly $1,900 annually (21st-best).

New Jersey is one of 21 states with no annual fee for owning an electric vehicle and currently there are over 30,400 electric vehicles registered in the state. Drivers have access to nearly eight charging stations for every 1,000 road miles (ranking 15th-best). For charging at home, the annual fuel cost savings are just over $1,900. For additional savings, there are also nine state incentives geared towards electric car owners.

Delaware rounds out our list of the top 10 states to own an electric vehicle. The estimated annual fuel cost savings in the First State are just shy of $2,000, ranking 10th-best for this metric. Delaware also ranks 11th for its access to electric charging stations (roughly nine for every 1,000 road miles). There are six incentives for electric vehicle owners for additional savings and is no annual fee for owning an electric vehicle.

To find the best states to own an electric vehicle (EV), SmartAsset looked at data for all 50 states and the District of Columbia. We compared them across six metrics:

The metric estimated annual fuel savings was double weighted and charging ports per 100 EVs was half weighted. We gave a full weight to all other metrics. To create our final rankings, we gave each state a score in each of the metrics based on how far above or below the mean they were. We then used the sum of these numbers to create the final ranking.

Tips for Buying and Owning a Car