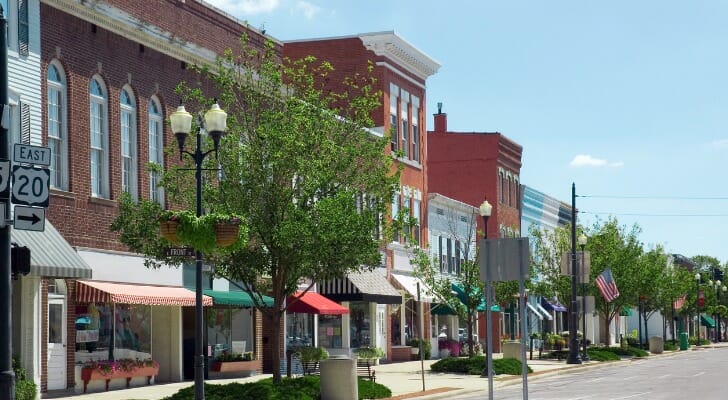 Nearly 400,000 people moved for retirement in 2020, a study conducted by HigherAHelper found. While the study’s data showed that retirees are twice as likely to move to a new state than all other movers, more than a quarter of retirees who moved in 2020 chose to leave larger cities and metropolitan areas. Smaller cities often have lower costs of living than big cities, making them ideal for retirees on fixed incomes.

To determine which small cities are best for retirement, we compared 247 cities (each with 65,000 to 100,000 residents) across eight different metrics: percentage of population above the age of 65, housing costs as a percentage of retirement income, estimated tax burden for seniors, number of retirement communities, number of medical centers, violent crime rate, property crime rate and unemployment rate. For details on our data sources and how we put all the information together to create our final rankings, read the Data and Methodology section below. 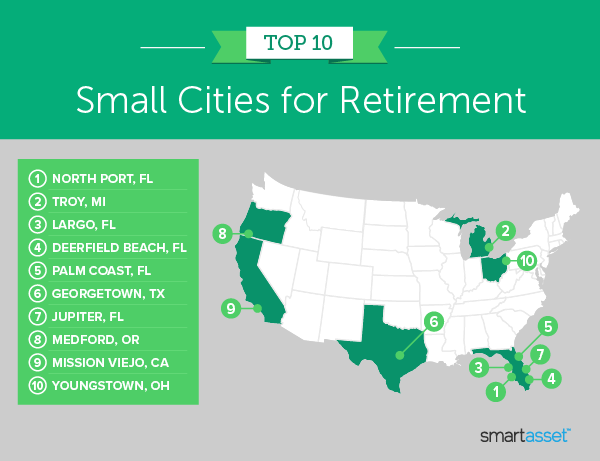 Troy, Michigan, has more than 21 medical centers per 10,000 residents, the seventh-most across our entire study. Located about 25 miles north of Detroit, Troy has the 16th-lowest unemployment rate of all 247 cities that we studied, 3.2% as of July 2021. Troy also has the 50th-highest percentage of senior residents, 18.33%.

Largo is the second of the five Florida cities in our top 10. Located just south of Clearwater, Largo has the ninth-highest percentage of residents who are 65 or older (24.03%) and an estimated senior tax burden of 14.51%, tied for 20th-best across our entire study. Meanwhile, this city of nearly 85,000 residents also has the 22nd-most medical centers per 10,000 residents (18.90), cementing its spot near the top of our rankings.

Located along Florida’s eastern coast, Deerfield Beach has a sizable senior population. The small city of nearly 81,000 people has the seventh-highest percentage (24.26%) of residents who are 65 and over. Deerfield Beach, located just south of Boca Raton, also ranks eighth-lowest for its estimated senior tax burden (13.59%) and has 18.73 medical centers per 10,000 residents, 24th-most across our study.

Palm Coast, Florida, has our study’s second-highest percentage of people who are 65 and older. Some 30.22% of Palm Coast’s 90,000 residents qualify as senior citizens, second only to North Port. Palm Coast, which is located on Florida’s eastern coast between St. Augustine and Daytona Beach, has the 17th-lowest property crime rate and ties for 20th-lowest estimated senior tax burden (14.51%) of all 247 cities included in our study.

Georgetown, Texas, ranks fourth overall for its high percentage of senior citizens (27.12%) and boasts the 15th-lowest property crime rate (932 crimes per 100,000 residents). In Georgetown, housing costs are 23.66% of the average retirement income, which puts this small Central Texas city of nearly 80,000 in the top 35 for this metric.

No place in this study has a higher percentage of medical centers than Jupiter, Florida. Situated between West Palm Beach to the south and Port St. Lucie to the north, Jupiter has nearly 23 medical centers for every 10,000 residents, the most of all 247 cities in the study. Jupiter also has the eighth-highest percentage of residents 65 and over (24.15%) and an estimated senior tax burden of 14.51%, tied for 20th-lowest.

The first of two Western cities in the top 10, Medford, Oregon has the third-lowest estimated senior tax burden (12.18%) and the fourth-most retirement communities per 10,000 residents (2.90). Meanwhile, 18.55% of the population in this southern Oregon city is 65 or over, which puts Medford in the top 50 for this metric.

The first and only California locale in the top 10, Mission Viejo has the 10th-lowest property crime rate and 10th-lowest violent crime rate across our study. With nearly 20 medical centers per 10,000 residents, this Orange County city ranks 13th for this metric. Mission Viejo, which has over 94,000 residents, also ranks 13th-highest for its percentage of the population 65 and older (23.04%).

Youngstown, Ohio benefits from housing costs that are relatively low. In this city of more than 65,000 residents, housing costs are just 20.32% of the average retirement income, 10th-lowest across the study. Meanwhile, Youngstown also ranks in the top 35 for the percentage of its population that is 65 and older (19.40%) and relatively low estimated senior tax burden (14.82%).

SmartAsset found the best small cities to retire in the U.S. by looking at data on 247 cities – all with populations between 65,000 and 100,000. We compared cities across eight metrics:

We found the mean for each metric and how each city fell comparatively (i.e. how many standard deviations above or below the mean). From there, we calculated an overall score, assigning a single weight to all metrics except violent and property crime rates, both of which were assigned a half weight. The city ranking as the best place to retire received a score of 100 while the city ranking worst received a score of 0.