Best Places to Retire in the Northeast – 2021 Study 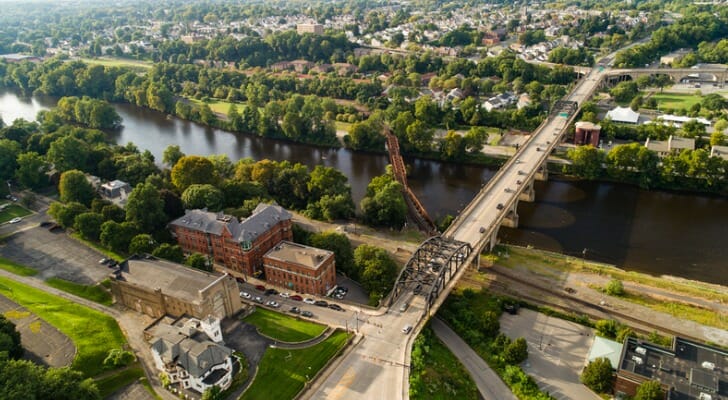 Not everyone retires in Florida. For some, the Northeast is a preferable retirement destination for its seasonal changes, blend of cities and countryside, and rich history. Despite generally high costs of living when compared with other regions of the country, a comfortable retirement in the Northeast is possible if you know where to look.

To determine the best places to retire in the Northeast, we considered cities with populations of at least 65,000 residents in these nine states: Connecticut, Maine, Massachusetts, New Hampshire, New Jersey, New York, Pennsylvania, Rhode Island and Vermont. We compared 55 cities across eight different metrics: percentage of the population above the age of 65, housing costs as a percentage of retirement income, estimated tax burden for seniors, number of retirement communities, number of medical centers, violent crime rate, property crime rate and unemployment rate. For details on our data sources and how we put all the information together to create our final rankings, read the Data and Methodology section below. 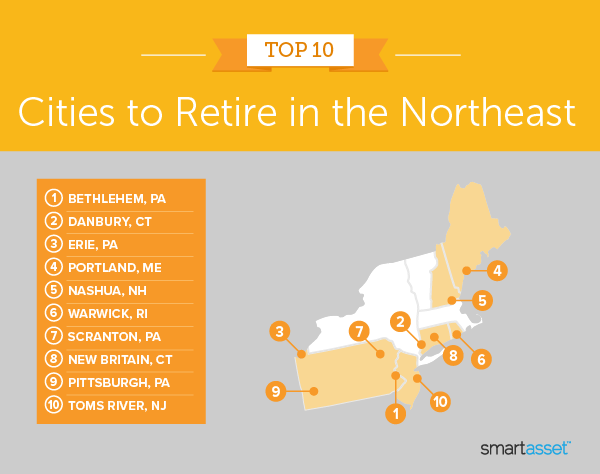 Located 70 miles north of Philadelphia, the city of Bethlehem, Pennsylvania, is the top-rated place to retire in the Northeast. Bethlehem has the seventh-most retirement communities per 10,000 residents across our study (0.79) and eighth-highest percentage of residents who are 65 and older (18.07%). Meanwhile, housing costs in this city of 76,000 residents are 29.77% of the average retirement income, the 11th-lowest percentage out of all 55 cities that we studied.

Located in the northwestern corner of the state, Erie, Pennsylvania, has the third-lowest housing costs compared to average retirement income (23.24%). This city of over 95,000 people also has the 11th-most retirement communities per 10,000 residents (0.70) and 15th-lowest estimated senior tax burden (15.99%). Meanwhile, just under 16% of the population in Erie is 65 and older, the 16th-highest percentage across our study.

One of the smallest cities in our study (66,000 residents), Portland, Maine, shouldn’t be overlooked as a retirement destination. Located on the picturesque Maine coastline, Portland has the second-most retirement communities and medical centers per 10,000 residents (1.02 and 17.76, respectively). With an estimated senior tax burden of 14.51%, Portland ranks third overall for this metric. This city also has the ninth-highest percentage across our study, with 18% of the population age 65 and older.

With zero sales tax and no state income tax on earned wages, it’s no surprise that Nashua, New Hampshire, has the lowest estimated senior tax burden in our study (11.07%). Nashua also has the fifth-most retirement centers per 10,000 residents (0.86) and the seventh-fewest violent crimes per 100,000 residents with 144.

Warwick, Rhode Island, has the highest concentration of retirement communities in our study with 1.10 per 10,000 residents. The city also has the second-highest proportion of residents who are 65 and older (20.84%), as well as the third-lowest violent crime rate (94 per 100,000 residents).

Scranton, Pennsylvania, isn’t just the setting of the cult TV show “The Office,” it’s also a viable place to retire in the Northeast. Scranton has the fourth-most retirement communities per 10,000 residents (0.91), as well as housing costs that are only 24.05% of the average retirement income, the fifth-lowest across our study. Meanwhile, 18.33% of Scranton’s population is 65 and older, the seventh-highest percentage out of all 55 cities included in our analysis.

With 300,000 residents, Pittsburgh is the largest city in the top 10. The Steel City has the third-most retirement communities (1.01) and medical facilities (17.31) per 10,000 residents. Housing costs in Pittsburgh are also relatively low, just 28.39% of the average retirement income, which is good for the eighth-lowest across our study.

Toms River, New Jersey, located 60 miles due east of Philadelphia, has the fifth-highest percentage of residents 65 and older (19.24%). This Jersey Shore town of nearly 92,000 people has the fifth-lowest estimated senior tax burden of 15.18%. Toms River also has the second-lowest violent crime rate across our study (77 per 100,000 residents). 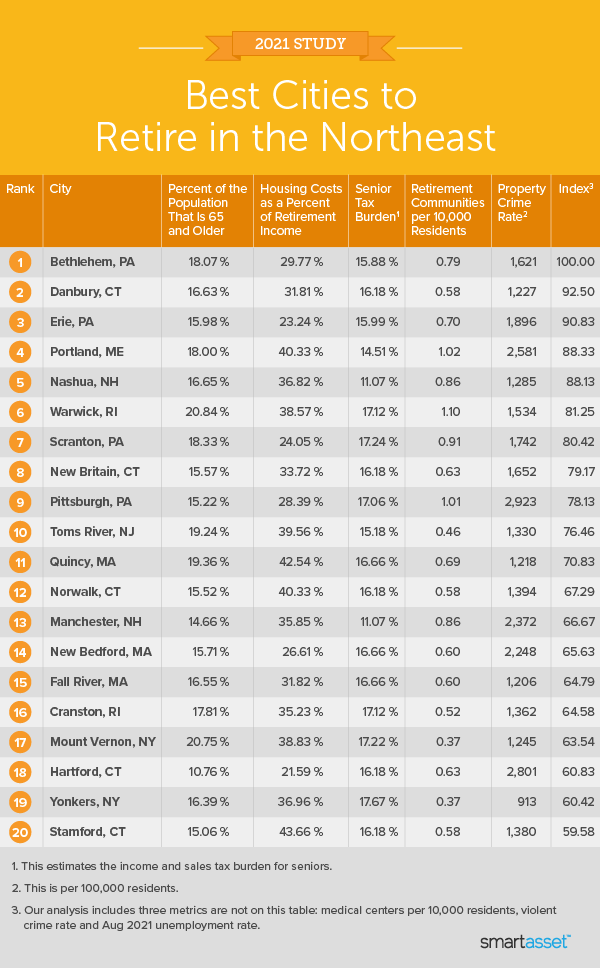 SmartAsset found the best places to retire in the Northeast by examining 55 cities, all with populations of at least 65,000 residents, and then comparing them across eight metrics: