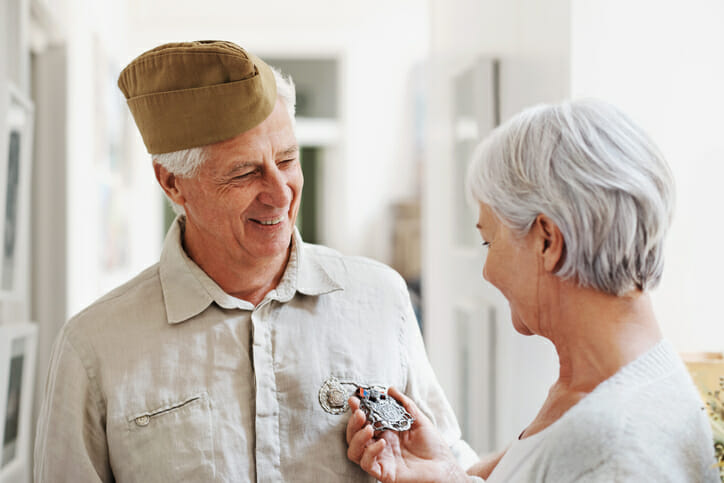 There are about 18 million veterans in the U.S., of which about 13 million are over the age of 50, according to recent data from the American Association of Retired Persons (AARP). With so many veterans either in retirement or nearing their golden years, SmartAsset looked into the best cities for military retirees to live in.

There are a number of factors that make a city or town a good place for veterans to retire such as military friendliness, access to resources and the local economic environment. In this study, SmartAsset compared 200 of the largest cities in the country across eight metrics spanning those three categories. For more details on how we analyzed the data and compiled the rankings, read the data and methodology section below.

This is SmartAsset’s latest study on the best cities for military retirees. Check out the previous version here.

In Anchorage, Alaska, 2.60% of the population is made up of veterans who are 65 and older, which is the 40th-highest percentage for this double-weighted metric. Meanwhile, Anchorage ranks No. 35 for the its low unemployment rate (2.9%) and No. 91 for the percent of veterans living under the poverty line (7.9%). For military retirees who are seniors, the city offers the lowest tax burden (14.78%) across the study.

Roseville, California ranks seventh-best for its military retirement friendliness index and eighth-highest for its economic environment ranking. Roughly 3% of the population in Roseville are veterans aged 65 and older (15th-highest) and the area offers the 22nd-highest income for veterans ($61,953).

Sioux Falls, South Dakota remains No. 3 this year due to its continued strong rankings. Sioux Falls boasts a spot among the top 20 cities for our resources for veterans category. In particular, we estimate that there are about 21 VA health facilities and almost two VA benefits administration offices, both per 100,000 veterans.

Colorado ranks sixth-best state for the number of VA benefits administration offices per capita, offering 2.30 offices per 100,000 veterans. The city of Lakewood additionally ranks 18th overall for its strong economic environment, which is made up of these three metrics: median veteran income ($53,957), percentage of veterans living under the poverty line (4.8%) and August 2022 unemployment rate (3.0%).

Overland Park, Kansas has the second-best ranking for the economic environment index across all 200 cities in our study. Unemployment is low, with only 2.6% of workers out of work in August 2022 (18th-lowest overall). Additionally, Overland offers the 60th-highest number of retirement communities per capita, at 16.53.

Chesapeake, Virginia showcases a top 20 ranking in two metrics: percentage of the population who are veterans ages 65 and up (3.22%) and median veteran income level ($76,406). Chesapeake seniors are less likely to be living under the poverty line with roughly 5.0% of this demographic in this position currently.

Surprise, Arizona held a few surprises for us when stacked against the 200 other cities in our study. For starters, the city ranks in the top 10 for both its military retirement friendliness and economic environment. Additionally, this Phoenix suburb took the number one spot in the ranking for the percentage of the population who are veterans ages 65 and older (4.51%) and has the second-lowest veteran poverty rate (1.4%).

Oceanside, California moved up one spot this year in the overall rankings for military retirees. Located between Los Angeles and San Diego, the city of Oceanside ranks well for its relatively low percentage of veterans living under the poverty line (5.0%), which is the 28th-lowest across our study. Veterans in Oceanside also earn roughly $58,369, the 34th-highest median income for veterans across the study.

Peoria, Arizona rounds out this year's top 10 rankings for the best places for military retirees. Peoria ranks in the top 20 cities for two metrics: percentage of veterans under the poverty line (3.6%) and percentage of population who retired veterans (3.36%). The median veteran income is $60,739, further demonstrating the area’s strong economic environment for veterans.

To conduct our study, we compared 200 of the largest cities in the U.S. in eight metrics across three categories:

First, we ranked each city in each metric, assigning an equal weight to every metric, except for the percentage of the population who are veterans ages 65 and older and veteran poverty rate - both of which are double-weighted.