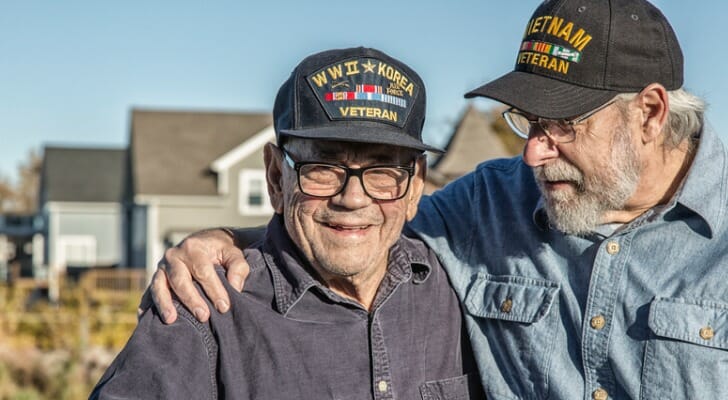 When the time comes for members of the American military to hang up their uniforms for good, they’ll inevitably face the same question anyone else asks themselves when nearing retirement: Where will I live? There are a number of factors that make a city or town a good place to retire. But which cities are best for military retirees?

To answer this question, SmartAsset compared 200 of the largest cities in the country across various metrics, including the percentage of the population who are veterans ages 65 and older, number of retirement communities, estimated senior tax burden, number of Veterans Administration health facilities and benefit offices, median veteran income, percentage of veterans living under the poverty line and unemployment rate. For more details, read the Data and Methodology section below. 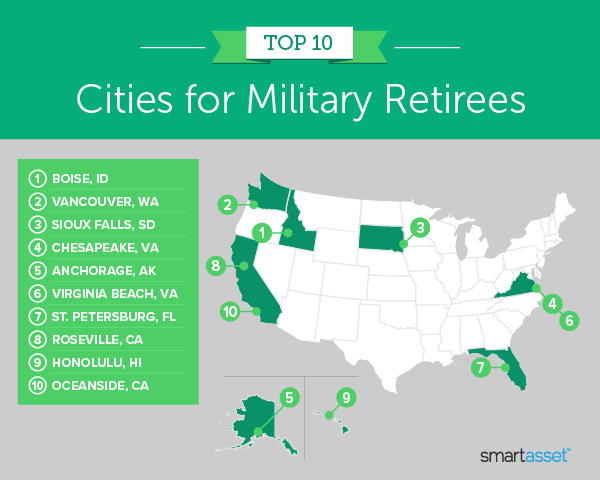 In Boise, 3.41% of the population is made up of veterans who are 65 and older, which is the 15th-highest percentage for this double-weighted metric. Meanwhile, Boise had the third-lowest unemployment rate (2.5%) as of August 2021 and the 15th-lowest percentage of veterans living under the poverty line (2.8%). Boise also ranks 17th for its number of retirement communities per 10,000 residents (1.41).

This city in southern Washington State has the ninth-highest score for the military retirement friendliness index, including the second-most retirement communities per 10,000 residents (4.06). Vancouver, Washington, also has the 24th-highest percentage of residents who are veterans ages 65 and over (3.03%).

Sioux Falls, South Dakota, boasts the ninth-best score within the resources for veterans index. This city of more than 183,000 residents ranks 23rd out of 200 cities for its number of Veterans Administration benefits offices per 100,000 veterans (1.75). Sioux Falls also has the ninth-lowest estimated senior tax burden across our study (13.92%).

Chesapeake, Virginia, ranks sixth overall for its economic environment, which is made up of these three economic metrics: median veteran income ($60,707), percentage of veterans living under the poverty line (3.4%) and August 2021 unemployment (3.8%).

Anchorage, Alaska, ranks highly for its military retirement friendliness (sixth). Within this category of metrics, Anchorage has the most retirement communities for every 10,000 residents (4.93) and the lowest estimated senior tax burden (8.07%) across our study. This city of 288,000 people also has nearly 14 VA benefits offices for every 100,000 residents, second-most among all 200 cities.

Virginia Beach, Virginia, has the fourth-highest percentage of residents who are veterans and 65 or older (4.03%). This city of 450,000 residents also has a relatively low unemployment, with only 3.6% of workers unemployed in August 2021 (the 18th-lowest unemployment rate across our study).

St. Petersburg, Florida, has the second-best military retirement friendliness score thanks in part to having the 13th-highest percentage of residents who are veterans ages 65 and over (3.59%). This city of 265,000 residents on Florida’s west coast also has the 18th-lowest estimated senior tax burden (14.51%) and 19th-most retirement communities per 10,000 residents (1.39).

Roseville, California, ranks fifth overall for military retirement friendliness, including the 12th-most retirement communities for every 10,000 residents (2.06). Veterans who are 65 and older comprise 3.32% of the population in this northern California city, the 17th-highest percentage across our study.

Honolulu, Hawaii is a great place for veteran retirees, coming in at No. 9. The city ranks 15th overall for veterans resources, including the third-most VA benefits offices (9.96 for every 100,000 veterans). A city of 345,000 residents, Honolulu also has an estimated senior tax burden of 14.89%, which is 23rd-lowest out of all 200 cities in our study.

To conduct our study, we compared 200 of the largest cities in the U.S. across the following three categories of metrics:

First we ranked each city in each metric. From there, we found the average ranking for each city, giving all metrics a full weight except for the two metrics that were given a double weight. Then we averaged the rankings across the three categories listed above. We created our final ranking by calculating each city’s average score for all three categories.