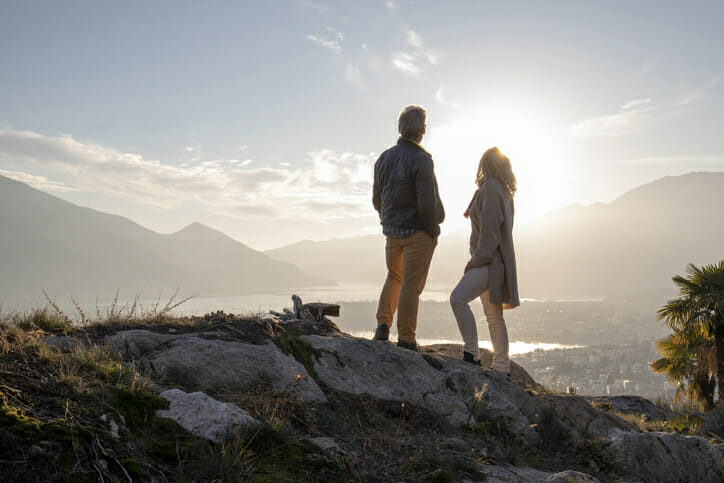 In this study, we determined the best places for an early retirement, comparing the 100 largest cities across four categories. They include tax friendliness, elderly care, affordability and livability. For more information on underlying metrics within each category and how we put together our findings, read our Data and Methodology section below.

Across the 14 individual metrics we considered, Gilbert, Arizona ranks in the top five cities for three of them. It has the fifth-best average housing costs relative to income (19.35%) and ranks third-best for its low violent crime and property rates (109 and 1,077 per 100,000 residents, respectively).

Chandler, Arizona is located less than 10 miles away from Gilbert. Across our four categories, Chandler ranks 12th-best in tax friendliness and 13th-best in elderly care. In terms of health and senior care, the average annual cost of a silver health insurance plan is roughly $8,600 (16th-best) and there are 11.19 retirement homes available for every 100,000 residents (13th-best). Housing costs relative to income fall below 20% (seventh-best).

Henderson, Nevada ranks 10th-best in our tax friendliness category: it has an effective income tax of 16.24%, an effective average property tax of 0.58% and the state has no capital gains tax. Henderson also has the eighth-best property crime rate (1,426 per 100,000 residents) and the 12th-best violent crime rate (208 per 100,000 residents). Dining and entertainment establishments make up close to 12% of all establishments, which ranks 11th-best.

Scottsdale, Arizona ranks well in tax friendliness (15th-best) and elderly care (14th-best). This city also has a 0.52% average effective property tax rate (fourth-best). In terms of elderly care, Scottsdale ranks 13th-best for the number of retirement homes per capita (roughly 11 for every 100,000 residents) and 16th-best for the average annual cost of a silver health insurance plan (roughly $8,600). This city also has the sixth-best housing costs relative to income (19.72%) and the eighth-best violent crime rate (179 per 100,000 residents).

Across the cities we considered, the most affordable Texas city for an early retirement is Plano. This city places in the top 30 across all four categories in this analysis: 16th-best in the tax friendliness category, 27th-best for both affordability and livability and 30th-best for elderly care. Plano also has the best effective income tax for retirees (16.24%) and there is no state capital gains tax in Texas. Additionally, it ranks second for housing costs relative to income (19.26%), fifth for violent crime rate (155 per 100,00 residents) and ninth for the number of medical facilities per capita (almost four per 1,000 residents).

Individuals looking to retire early may be interested in Louisville, Kentucky as the city ranks very well for our categories of affordability and livability. This city's median annual housing costs make up only 20.30% of median household income (11th-best) and the estimated annual cost of living is $24,505 (19th-best). The city is also relatively safe. It has the ninth-lowest property crime rate (about 1441 per 100,000 residents) and 21st-best violent crime rate (less than 346 per 100,000 residents).

The third-most populous city in Arizona, Mesa ranks well for the categories, elderly care and tax friendliness. Residents here can expect to pay roughly $8,600 annually for a silver health insurance plan (16th-best). There are also roughly 11 retirement homes for every 100,000 residents (13th-best) and three medical facilities for every 1,000 residents (44th-best). In terms of taxes, the average effective property tax rate is seventh-lowest, at 0.53%, and the maximum state capital gains tax in Arizona is 4.50%.

Lexington is the second Kentucky city in our top 10. Across our four categories, Lexington ranks highest in affordability (ninth-best) and livability (19th-best). Across specific metrics, Lexington ranks ninth-best for housing costs relative to income (20.01%), 12th-best for estimated annual cost of living ($23,163), 16th-best for violent crime rate (about 320 per 100,000 residents) and 19th-best for average number of days with extreme temperatures (less than 15 per year).

To find the best cities for an early retirement, SmartAsset looked at data for the 100 largest cities in the U.S. We compared them across four categories, spanning 14 individual metrics:

First, we ranked each city in all metrics, assigning an equal weight to each. We then averaged the rankings across the four categories listed above.

Tips for Succeeding in Early Retirement