U.S. Cities With the Fastest-Growing Incomes 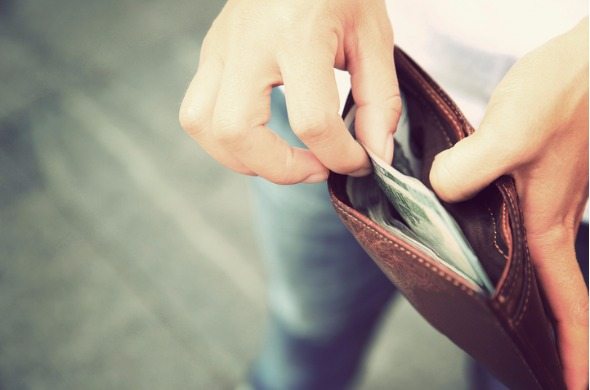 The unemployment rate in the U.S. hit 4.2% in September 2017, according to Bureau of Labor Statistics. This is the lowest it’s been in a decade, since the start of the Great Recession. While a low unemployment rate is important, rising incomes matter more for American families. SmartAsset examined the most recent income data to find the U.S. cities with the fastest-growing incomes.

Check out the best savings accounts.

In order to find the cities with the fastest-growing incomes, SmartAsset analyzed median household income data from 2015 and 2016. Check out our data and methodology section below to see where we got our data and how we put it together. 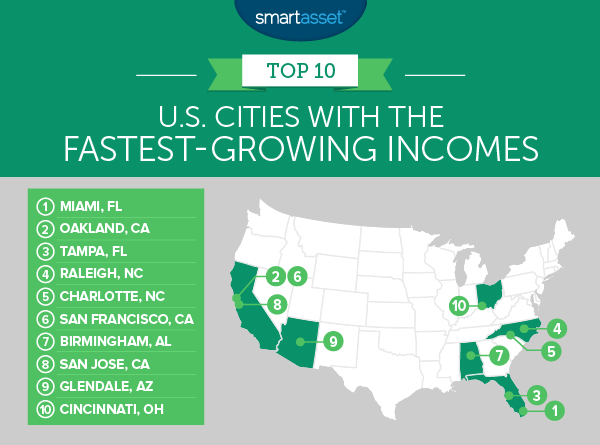 When you also consider the fact that Florida has no income tax, you can bet Miami households have a smile on their face.

Oakland benefits from being located near one of America’s most productive areas, Silicon Valley. With the availability of high-paying tech jobs, it’s not too surprising that incomes in Oakland have risen. Data from the Census shows that from 2015 to 2016, the median household income in Oakland went from $58,800 to $68,000. That’s an increase of 15.7%.

Residents on Oakland may want to keep an eye on rent costs eating into their incomes though. The average rental in Oakland costs over $1,300, a number which rose 5% from the previous year.

Another Florida city takes third. The average household here received a raise of around $6,000, going from earning $44,000 to $50,000. That raise will make saving for retirement a little easier for Tampa residents.

However like Oakland, Tampa residents are also facing increasing rent costs. The median rent in Tampa is up just under 10%.

The city is also part of North Carolina’s Research Triangle which brings high-paying STEM jobs into the area. Overall incomes rose 13% from 2015 to 2016.

Charlotte is home to the third-largest financial sector in the country. Bank of America, the second-largest financial institution in the U.S., is based in Charlotte. The Queen City is also the eastern headquarter for Wells Fargo and employs over 22,000 people in the city.

Working in finance tends to pay well but just about everyone across Charlotte seems to be doing better. The average Charlotte household saw incomes rise from $54,000 to $61,000.

San Francisco households were already some of the highest earners in 2015. And thanks in part to the high paying tech jobs, that income growth is not slowing. The average household in San Francisco in 2016 earned almost $104,000, up about $12,000 from 2015.

The other piece of good news for SF residents is that incomes are growing faster than those rents. From 2015 to 2016, Census data showed that the median rent rose about 7.5%.

On average Birmingham residents earn less than their neighbors throughout Alabama. But that may change in the coming years. From 2015 to 2016 Birmingham’s median household income grew 12%, or by $4,000. The rest of the state of Alabama only saw incomes grow by about $2,000.

For Birmingham households who recently received a raise and are looking to buy a home there is some good news. Alabama has some of the lowest property taxes in the nation so the long-term cost of owning a home in Alabama is lower than it is in other states.

This study shows just how powerful STEM jobs can be to a local economy. Another Silicon Valley city, San Jose, ranks eighth. From 2015 to 2016 the average household in San Jose got a raise of over $10,000, or 12.7%. San Jose’s cost of living is high so that extra income will come in handy. Our data shows that median rents jumped 9% from 2015 to 2016.

In one sense Glendale households may actually be feeling richer than some of the other cities ahead of it on this list. Median incomes in Glendale grew 11%, the ninth-highest rate, but median rents only rose 4.5%. This means a smaller percent of Glendale’s residents budgets are going toward housing. 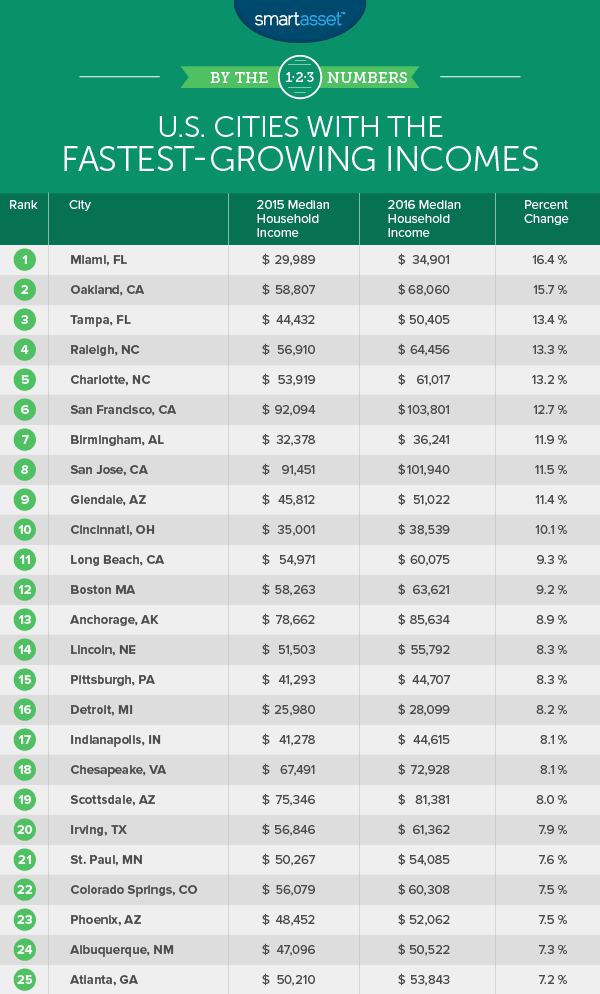 In order to find the cities with the fastest rising incomes, SmartAsset analyzed data for the largest 100 cities in the country. Specifically, we looked at data for the following two metrics:

Tips for Asking for a Raise

According to Glassdoor, 31% of employees believe they don’t receive fair pay. If you are among that group, here are some tips for asking for a well deserved raise.