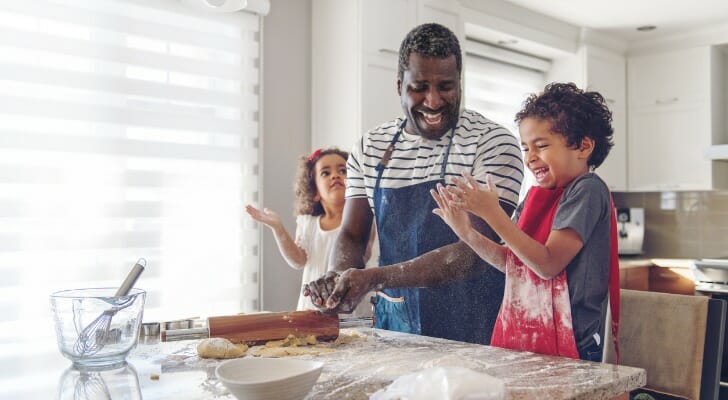 It costs more than $233,000 to raise a child through age 17, according to the U.S. Department of Agriculture. Given that high cost, you want to know that you’re living in a place that is conducive to your family’s happiness and success. In this study, we looked at almost a dozen factors, including childcare costs and housing affordability, to find the best cities on the West Coast for families.

To find the best places to raise a family on the West Coast, we considered data on 10 factors. We looked at housing costs as a percent of income, annual cost of childcare, percent of residents under age 19, average math proficiency, average reading proficiency, high school graduation rate, average spending per pupil, poverty rate, unemployment rate and crime rate. 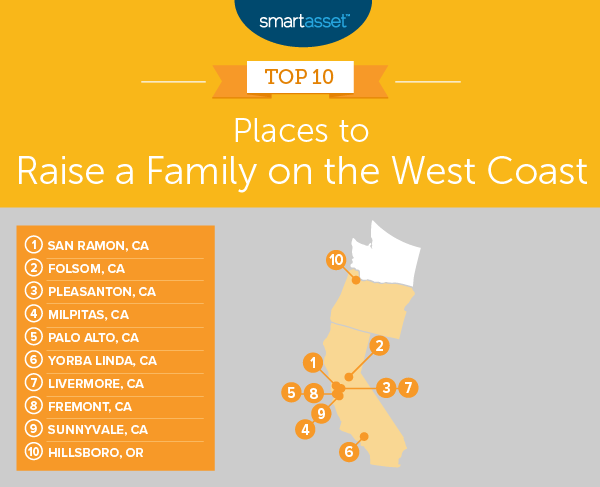 It is no surprise that San Ramon is our No. 1 place to raise a family on the West Coast given that it’s also one of the best places to live in California. It has the 14th-lowest housing costs as a percent of median income. There are also plenty of young people there already: San Ramon has the 13th-highest percentage of its population under age 19, reaching 32.20%. It also has a low poverty rate (4.50%) and unemployment rate (2.50%). Both of those are eighth best in the study. In addition, San Ramon has the fifth-lowest crime rate.

Housing costs in Folsom equal just 19% of household income on average, a metric for which Folsom comes in second. It also has the fourth-lowest poverty rate in this study. While a relatively low percentage of the population is under 19, Folsom’s high school graduation rate is 89.53%. That’s the eighth-highest rate of all 150 cities we ranked.

Another Bay Area city, Pleasanton takes third. It ranks as the seventh most affordable in our housing-cost metric. Pleasanton also has the fifth-lowest poverty rate and an unemployment rate of just 2.40%, which is the third lowest in the study. It has a top-25 rate in childcare costs as well as in average math and reading proficiency.

Milpitas comes in at number four thanks largely to its top-20 scores in math and reading proficiency. The high school graduation is a little higher than 88%. While the poverty rate in Milpitas is relatively high at 7.10%, the unemployment rate is quite low at 2.40%.

Rounding out the top five is Palo Alto, California. This Bay Area city has the 10th-lowest rate for housing costs as a percent of income. Unemployment here is just 2.90%. That’s the eighth-lowest of all the cities we ranked. Only about 26% of Palo Alto’s population is under 19 years old, but those children tend to do well in school. Its math and reading proficiency scores are both in the top 20. The high school graduation rate is similar to that of Milpitas, at approximately 88%.

Just outside of Los Angeles, Yorba Linda is the southernmost city in our top 10. A large factor in this city’s high ranking is its low poverty rate. It has the lowest rate in the study: 1.80%. Yorba Linda’s crime rate is the third lowest in our study and the lowest in the top 10. It has the sixth-highest spending per student and a high school graduation rate of more than 87%.

Livermore has the second lowest unemployment and poverty rates in this study. Both are less than 3%. Students here also do well: The math and proficiency rates are both in the top 25, and the high school graduation rate is at about 87%. More than 75% of Livermore’s population is 20 or older, which is one factor that negatively affects this city’s ranking for this study.

At number eight, Fremont is a relatively affordable place to live in, with the 16th-lowest housing cost as a percent of income. Less than 25% of the city’s population is under 19. Fremont has a graduation rate of 87.18% for high school students, and the city’s scores in math and reading proficiency are both in the top 25.

Sunnyvale ranks fifth best in housing cost as a percentage of income. Housing costs are just 20.82% of the median income here. Less than 22% of the city’s population is age 19 or younger. Math and reading proficiency rates are both top 20. The high school graduation rate is higher than 88%. Sunnyvale also has the 21st-lowest crime rate in the study, which factors into its ranking as the safest city in America.

Rounding out the top 10 is Hillsboro, Oregon, the first city in our study that is not in California. Hillsboro is one of the best overall places to live in Oregon. Childcare is affordable in Hillsboro, as this city holds the highest ranking in the study for this metric. Housing costs here are also manageable. We found that they make up just 21.57% of the median income for residents. That’s the 12th-best rate in the study. The poverty rate here of 5% is the 10th-lowest in the study. 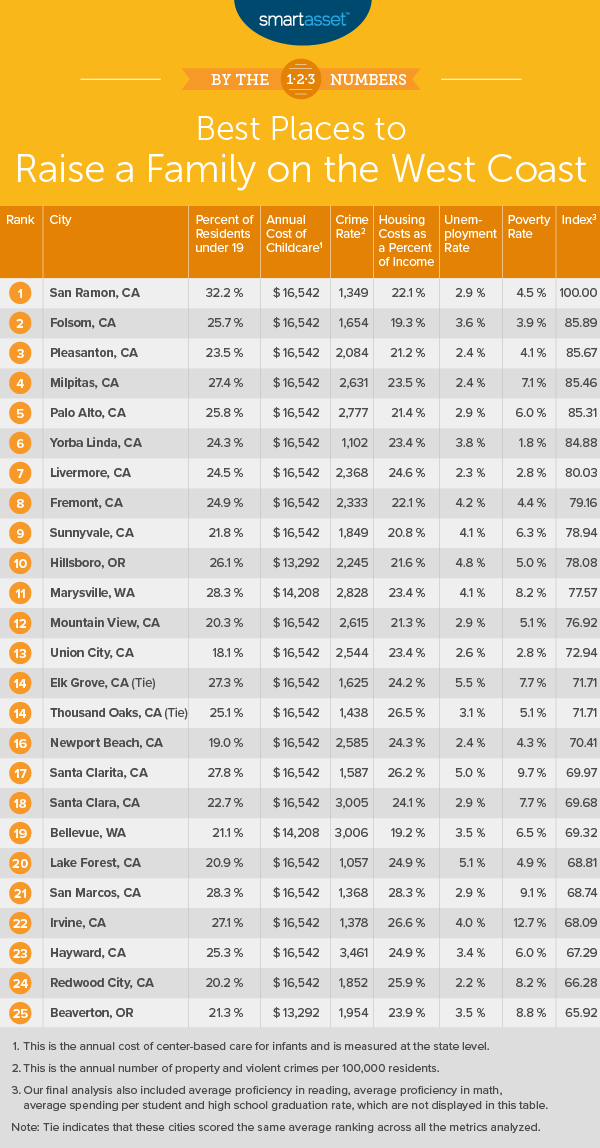 To find the best cities to raise a family on the West Coast, we compared 150 cities across 10 different factors: