The Best Places to Raise a Family in the Northeast – 2019 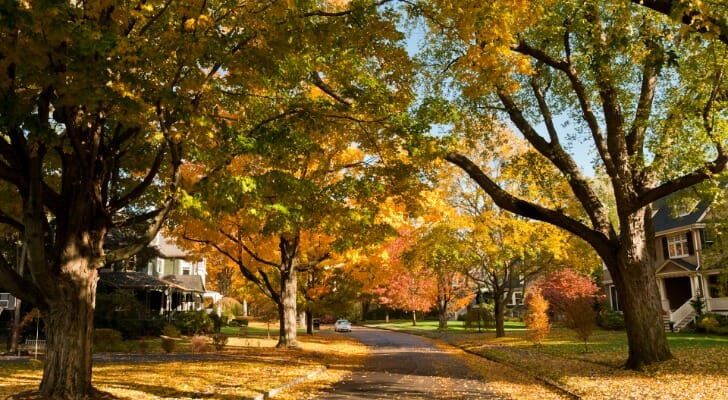 The total cost of raising a child through age 17 is nearly $234,000, according to the U.S. Department of Agriculture. That’s a whopping price tag for your bundle of joy. And the expense of having a family explains, in part, the downturn in the American fertility rate and why the average American woman now has just 1.8 children, a figure far below “replacement level.” But especially in the Northeast, which is checkered with pricey cities, it’s possible for parents to be strategic about where they settle to make sure they’re saving ample money and getting more bang for their buck from the local school system. Of course, some locales more than others are conducive to raising a family given their abundant employment opportunities, low housing costs and investment in children’s education.

Below, we look at data to rank the best cities to raise a family in the Northeast. Specifically, we analyze data using the following 10 metrics: housing costs as a percent of income, the annual cost of childcare, percent of residents under the age of 19, average math proficiency, average reading proficiency, high school graduation rate, poverty rate, unemployment rate, crime rate and average spending per pupil. 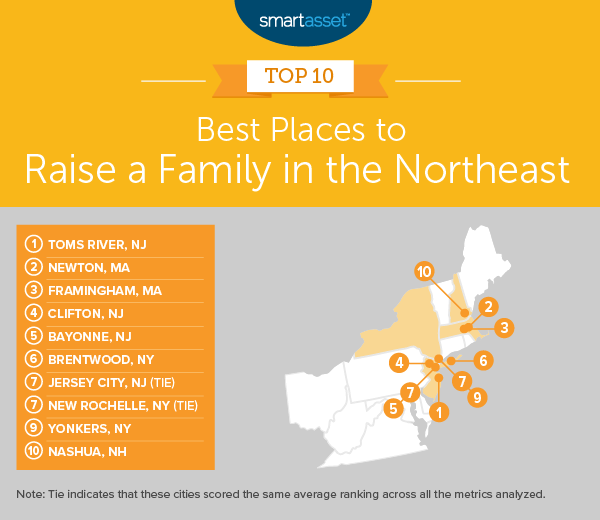 If you are raising a family in the Northeast, you can’t beat Toms River, New Jersey, according to our data. This city offers plenty of economic opportunities to parents. It has the third-lowest unemployment rate and poverty rate. Crime here is fairly low as well: Toms River sees about 1,510 crimes per 100,000 residents, the sixth-lowest rate in the study.

Newton has the lowest crime rate in the study, a point any family would find appealing. According to the latest data, this city saw fewer than 700 crimes per 100,000 residents. The local schools here are also some of the best in the Northeast. They help Newton hold the place of highest math proficiency rate and 11th highest in reading proficiency. Incomes here are also high relative to housing costs. The average household can dedicate less than one-fifth of its income to pay for the average home.

Framingham lies just two towns west of Newton. And like in Newton, housing costs here comprise a relatively low percent of income. What’s more, crime is a rarity. Framingham ranks in the top five in both of those metrics. Framingham also has a substantial population of young residents, with 28.7% of residents under the age of 19.

Data from the Department of Education and the Census Bureau shows that Clifton is a good place to raise a family. The local school system provides excellent support for children here. In fact, the metro area in which Clifton is located has the highest spending per pupil in this study. Clifton also has an unemployment rate of 3.9% – a good sign of the economic opportunities available to residents.

The schools around Bayonne have a high school graduation rate of 90.6% on average, a top-10 rate. Crime is also not a big threat for families living in Bayonne. Only three other cities in this study have lower crime rates than Bayonne. Relative to the rest of the Northeast, childcare costs in New Jersey are fairly low. The cost of raising a child in New Jersey is roughly $8,000 less than it is in Massachusetts.

Brentwood is the first city in New York to appear in the top 10. A young population and a high average high school graduation rate buoy this city’s ranking. In both of those metrics, Brentwood nabs a top-20 spot. Poverty in this city is also relatively uncommon. Brentwood has the 10th-lowest poverty rate in the study.

Jersey City is a good place to raise a family. This city has easy access to New York City and the attendant job opportunities. But high demand for this proximity drives up prices in Jersey City. Adjusted for income, Jersey City costs about average for a Northeastern city. Jersey City also ranks in the top 20 for poverty rate and unemployment rate.

Located in Westchester County, New Rochelle is tied for seventh place. The main reasons that families would favor it as a place to live are the low crime and poverty figures. By both metrics, New Rochelle ranks in the top 10. The metro area around New Rochelle also spends a lot on its pupils. The average student received $23,600 in funding in 2016.

About eight miles west of New Rochelle (and just beneath it in this study) is Yonkers, New York. Families appreciate that Yonkers has a low crime rate. According to the latest FBI data, there were just 1,406 crimes per 100,000 residents in Yonkers. More than 90% of its students graduate from high school as well, which is a top-10 rate. One concern about this location may be its cost of living: Yonkers ranks below average in housing costs as a percent of income for the median household.

Nashua is an affordable place to raise a family. In both of our cost-of-living metrics, Nashua ranks in the top 10. Specifically, the median Nashua home costs just 23% of income for the average household. In New Hampshire, the annual cost of childcare is relatively low as well, totaling $12,487 per child. Nashua is more than just affordable, though. It ranks in the top 10 for low crime and poverty rates as well. 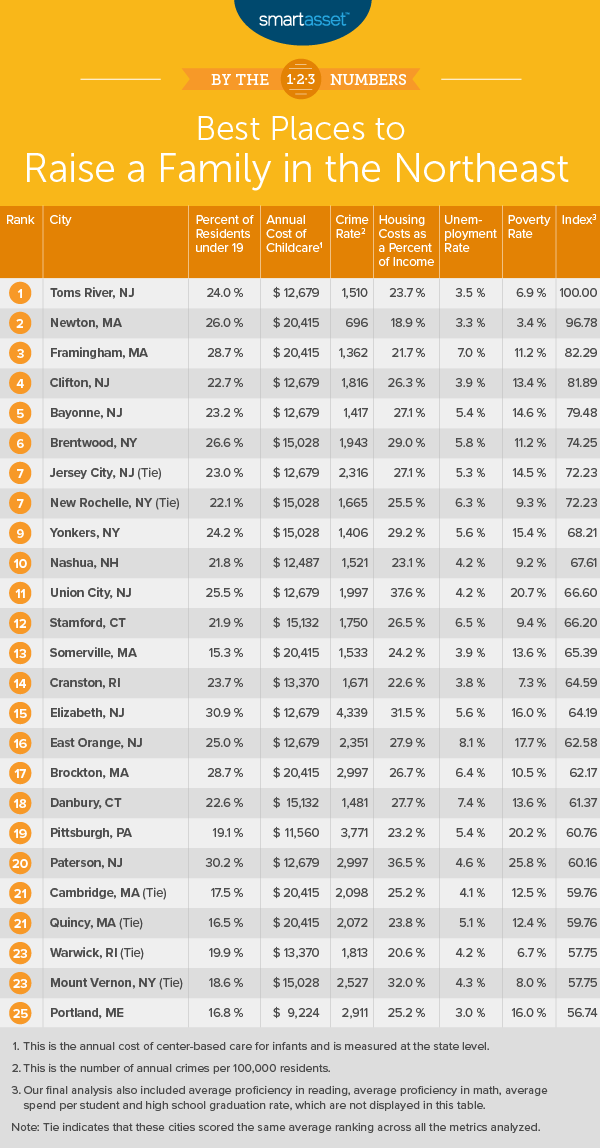 In order to rank the best cities to raise a family in the Northeast, we looked at data on 59 cities. We compared them across the following 10 metrics:

Tips for Managing your Savings