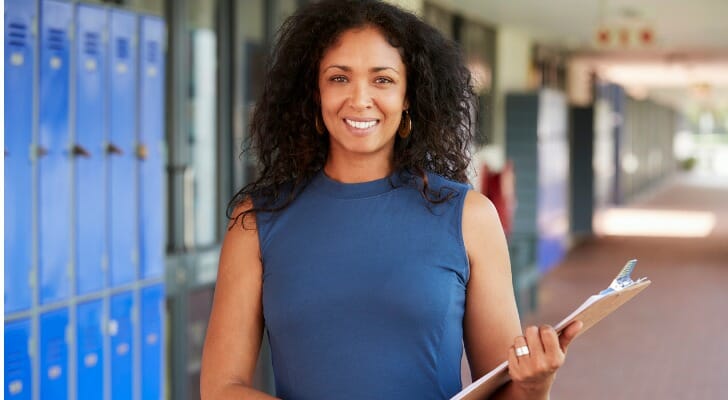 Across the country, teachers are having a tough time making ends meet. Earlier this year, teachers in states like West Virginia and Oklahoma went on strike and won concessions for themselves and the schools where they teach. All told, teachers in eight states went on strike this year with differing results.

But while going on strike and emerging victorious on some hot-button issues is something for teachers to celebrate, they probably would have preferred to have prevented the situations from getting so bleak. In contrast to those dire scenarios, pay for teachers and school funding are on the rise in some parts of the country. This means teachers in those areas have disposable income to save and don’t need to strike to earn it.
Below we look at factors like income, income growth, job growth, spending per student, state union strength, housing costs, graduation rate, average test score and violent crime rate to find the best places for teachers. Check out our data and methodology below to see where we got our data and how we put it together to create our final rankings.

This is SmartAsset’s fourth annual study of the best places to be a teacher. Check out the 2017 version here. 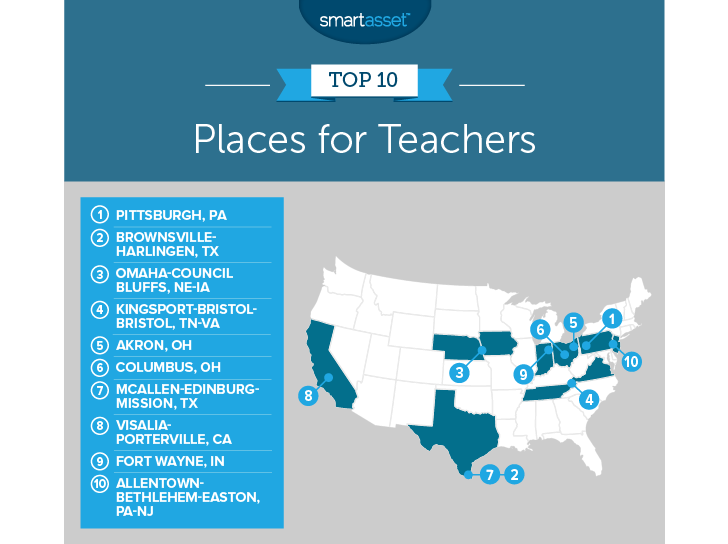 Teachers’ incomes in Pittsburgh are even more impressive when you consider the local cost of living. The median home here costs only $814 per month, which is about 15% of the average teacher’s salary.

One of the most affordable cities in our study comes in second. Teachers here only make $52,500 per year, which is a below-average mark. However when you consider the cost of living, teachers here can actually have more disposable income to save and invest than teachers with higher incomes in higher cost-of-living areas. The median home in Brownsville-Harlingen costs $615 per month equal to about 14% of income for the average teacher. Teachers here also seem to be high performers. This metro area ranks in the top 15 for both graduation rate and average test scores.

Teachers looking for a place to grow should consider Omaha-Council Bluffs as a place to move to. According to our data, the average income for teachers here increased by 15% over the past three years. At the same time, the number of jobs also increased by 10%. Teaching here also means access to high-quality schools with hard-working students. This metro area ranked eighth overall for average test scores in math and English.

Despite the rising incomes, teachers in this metro area will need to do some budgeting to maximize their savings. The median home here costs more than 21% of the average teacher’s salary, a relatively poor score.

Kingsport-Bristol-Bristol, which straddles the Tennessee-Virginia border, takes the fourth spot. This metro area has the most affordable housing in our study. That should help stretch salaries for teachers here, which on their face do not seem too impressive. The average teacher makes just under $50,200 per year. But housing costs here, which run less than $600 per month on average, eat up only 14.2% of the average teacher’s salary, a rate comparable to metros where teachers are paid much more. And while the pay is not stellar today, there are signs it’s on the rise. From 2015 to 2017 average pay for teachers increased by 8%.

Akron fell a bit from last year’s ranking, but teachers here are still doing well according to our data. The average teacher here makes $62,000 per year, and job opportunities for local teachers continue to grow. According to our data the number of teachers grew by 7% from 2015 to 2017. The local government in Akron also supports teachers fairly well. Our data shows that Akron spends about $12,500 per pupil a top 30 rate. Partially thanks to that financial support, this metro area ranks in the top 25% in both average math and English proficiency.

Ohio’s capital comes in sixth. If you are looking for a job, and you are a teacher, you would be hard pressed to find a better metro area than Columbus. Teacher employment here increased by a remarkable 28% between 2015 and 2017, the second-fastest rate in the study. Unfortunately, all that job growth has not had positive effects on the earnings of current teachers. Average salaries for teachers here basically didn’t move from 2015 to 2017. The Ohio Education Association. which is ranked as one of the better teachers unions in the country, supports Columbus teachers.

Texas has two metro areas in this top 10. The Lone Star State’s second representative, coming in seventh, is McAllen-Edinburg-Mission. This southern Texas metro area pays its teachers one of the highest wages in the country, after controlling for cost of living. The average teacher here makes $57,000 per year while the average home costs $630 per month. That means the average teacher would need to spend about 13% of his or her income to pay for the average home. Other promising metrics include the high-achieving students and the low violent crime rate. In both of those metrics, this metro ranks in the top 25.

Teachers in Visalia-Porterville are some of the most well-supported in the country. The pay here is high. With average incomes falling just shy of $73,800, teachers here are some of the highest-paid in the country. Local schools and students also receive funding equal to about $12,200 per student. With many teachers dedicating portions of their salaries to paying for much-needed school supplies, the extra support from the local government is welcome help for local teachers. Around 92% of students here graduate from high school, a sign of good schools and something teachers in Visalia-Porterville can take pride in.

Coming in ninth is Fort Wayne, Indiana. This metro area has three top-10 scores, including employment growth, housing costs and graduation rate. The reason Fort Wayne doesn’t crack the top 5 is income for teachers. The average teacher here makes about $51,000 per year a figure, which is up only 2.2% from 2015 to 2017.

Allentown-Bethlehem-Easton, Pennsylvania-New Jersey is last but not least. Pay here for teachers is pretty high at $68,000 per year. That ranks 32nd overall but second in our top 10. We may see teachers here earn even more in the coming years as well. From 2015 to 2017, average pay for teachers increased by about 11%, a top 15 rate. Teachers here are also supported by high spending per pupil and a strong state teachers’ union.

Unfortunately for teachers, students in schools here underperform dragging Allentown slightly down the ranks. Other concerning metrics include the median housing costs, which are the highest in the top 10.

In order to find the best places to be a teacher, SmartAsset looked at data for 139 metro areas. Specifically, we compared them across the following nine metrics: