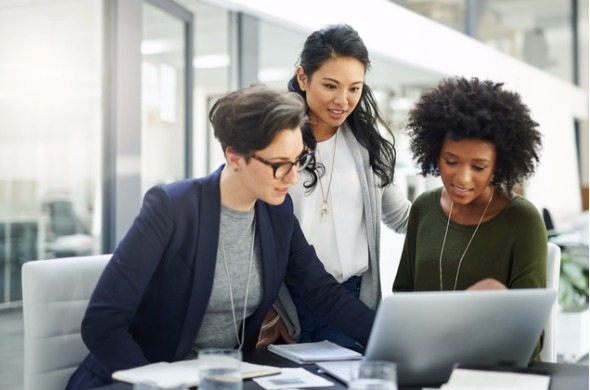 One constant in the U.S. economy over the past 40 years has been the ascendency of women in the work place. In 1976 the number of men in the workforce was about 47% higher than the number of women (57.1 million to 38.9 million). By 2016 that number had dropped to almost 14% (84.7 million to 74.4 million). But the gains to women’s employment have not been evenly spread across the country. In some parts of the country you are more likely to see women employed, earning high salaries and spending less on housing than you are in others.

Below we compare employment rates and earnings data to find the best places for working women. We looked at data on workforce representation, income after housing, female labor force rate, female unemployment rate and the pay gap for 472 metro areas. Check out our data and methodology section below to see where we got our data and how we put it together.

This is our second annual study of the best places for working women. Check out the 2016 version here. 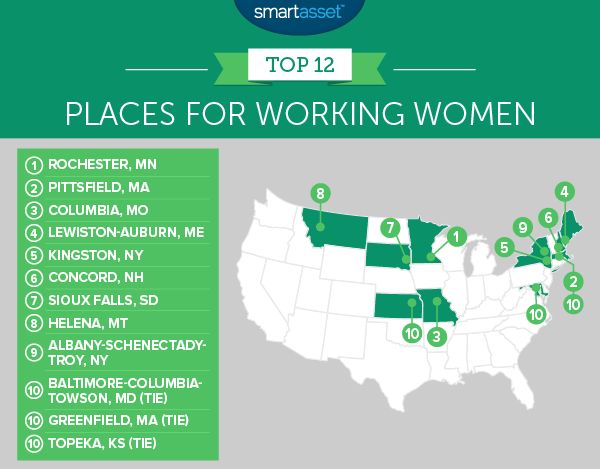 Once again Rochester takes the top spot as the best place for working women. The reason Rochester ranks so high is the pay. Women here, on average, have about $26,000 left after paying housing costs. That is the highest figure in our study, and over $5,000 more than second-placed Pittsfield. A decent chunk of that is probably going to the tax man however. Minnesota has some of the highest state taxes in the nation.

The pay gap in Pittsfield is also low. In this metro area, the average woman is paid 83% of what the average man is paid. If Pittsfield wants to take the number one spot next year it should look to improve its unemployment rate for women. According to our data, 4.2% of women in Pittsfield are unemployed.

Columbia falls one spot from last year’s analysis but this city still put up great scores. This city’s best scores came in availability of work. According to our data, only 2.2% of women are unemployed while just under 64% of women are in the labor force.

One reason while this metro area may be good for women is the University of Missouri. The university offers good employment opportunities in education, a field in which women tend to excel. There are also over 10,000 healthcare-related jobs in the area, another industry women tend to be well represented in.

Lewiston-Auburn just narrowly misses out on the top 3. This city scores in the top 20% in each of our metrics and in the top 15% in four. This city’s best score is its unemployment rate. Women in the area have no trouble finding jobs, only 3% of them are unemployed.

Due to how well women are paid in Kingston, this metro area finds itself ranking fifth. According to our data, after paying for housing the average woman should have over $21,400 left, a top 20 score. That figure is fairly competitive with men. The average woman here earns about 79% of what the average man earns.

Another New England metro area takes sixth place. Women in New Hampshire’s capital have relatively little trouble finding work. Only 3.1% of women here are unemployed. There is also an almost even split in work force representation between men and women in this city. According to data from the Census Bureau, 49.6% of workers in Concord are women.

Another Great Plains’ capital takes eighth. Women in Helena are well paid, especially when you consider how affordable housing in the area can be. According to our data, the median home in the area costs about $10,600 per year and the average women earns over $32,300 per year. That leaves the average working women with $21,600 after paying for housing.

Another plus for homeowners in Big Sky Country? Montana has some of the lowest property taxes in the country.

Albany-Schenectady-Troy has a slightly high women’s unemployment rate for our top 10 (3.7%), making work relatively hard to find. However to compensate, the average pay is high. We estimate the average working woman would have about $22,000 left after paying for housing.

The pay gap here is also relatively low. Women on average make 78% of what men make.

This city is especially good for women who want to get into the high-paying STEM field.

The second of two Massachusetts metro areas to crack this list is Greenfield. This area is located in northwestern Massachusetts. Women here do not tend to earn as much as they do in other cities. We estimate after paying for housing the average women in Greenfield is left with only $19,100.

The average woman also only earns 69% of what the average man earns. But employment opportunities here are relatively plentiful and women make up the majority of the workforce.

Another capital rounds out this top 12. Topeka dropped a few spots from last year but is still a great place for working women. Women here face low unemployment rates and good pay. In both of those metrics Topeka’s scores beat 90% of metros.

Topeka women are slightly underrepresented in the workforce. Women only make up 48.7% of the workforce in Topeka. 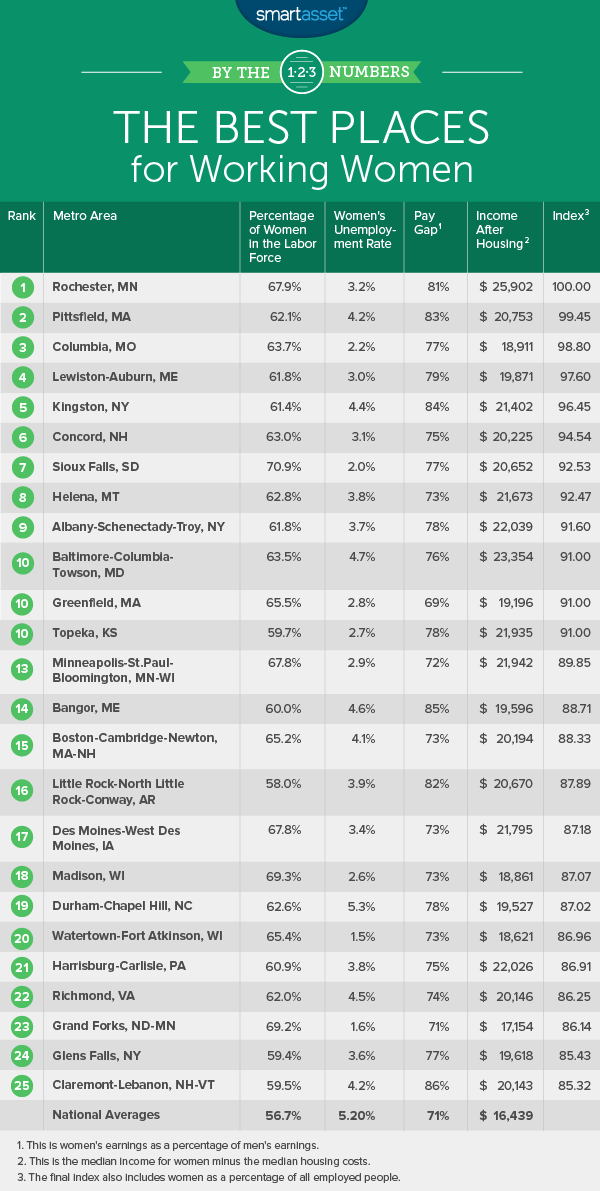 In order to rank the best places for working women, we looked at 472 metropolitan areas across the following five metrics:

Data for all five metrics is from the U.S. Census Bureau’s 2016 American Community Survey 1-Year Estimates.

Tips for Making the Most out of Your Income

Most people focus on raises when they think about how they can increase their income. But there are other much simpler ways to maximize your income. For example you can double your saving rate just by choosing the best savings account. For example the America Express Personal Savings Account offers annual interest rates of 1.25% with no minimum monthly balance or monthly fees. Ally Bank offers a similar account with 1.25% annual interest rate, also without a minimum balance. Both of those accounts have returns five times the national average.

In order to get the most out of your savings though you will also want to keep putting as much money away as possible. Check out our budget calculator to make sure you are saving as much as possible and see if there is fat to trim in your budget.