The Best Cities to Work From Home – 2019 Edition 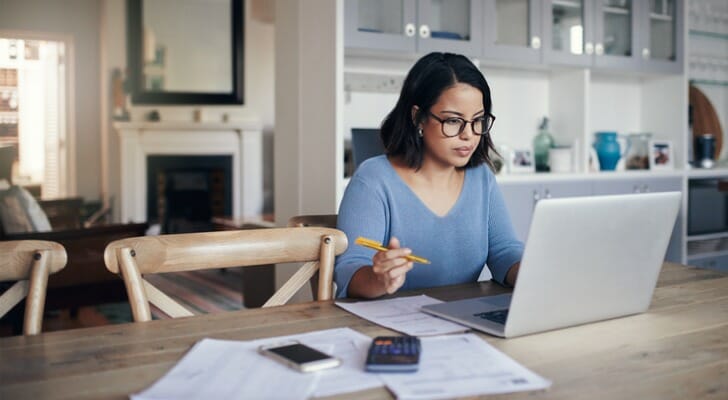 The benefits of working from home are manifold — but especially helpful when it comes to your mental state and finances. After all, a commute can be stressful and pricey if you’re guzzling gas while sitting in traffic. What’s more, eating at home is usually cheaper than the standard takeout fare you might find around the office. And even working remotely in general — from your local coffee shop, for instance — can leave you with more time to accomplish your tasks without wasting time in transit to work. But despite its many benefits, the telecommuting revolution has yet to take hold in America: Only 8 million workers, or 5.2% of all employees 16 and older, work from home full-time, according to Census Bureau data. So if you do want to establish yourself as someone who works from home, you need to live in a city with an established work from home culture. Below, we look at a slew of factors to rank the best cities to work from home.

In order to rank the best cities to work from home, we examined data on seven metrics. We looked at the percent of employees working from home, the five-year change in employees working from home, the unemployment rate, the poverty rate, the median home cost as a percent of income, coffee shop density and bar density. Check out our data and methodology below to see where we got our data and how we put it together to create our final rankings. 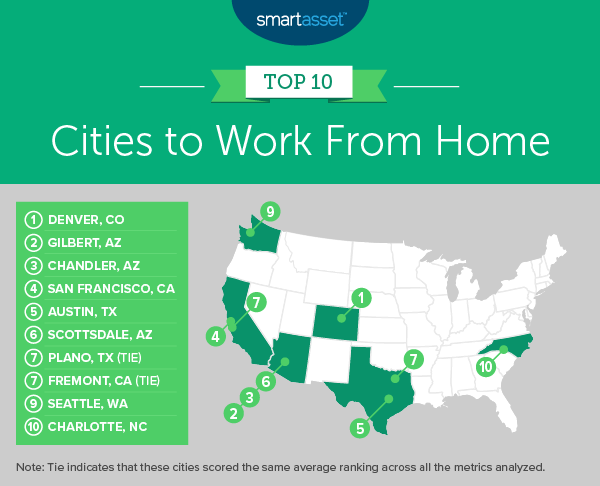 It is all well and good while living in a city with affordable housing and good-paying jobs to try to negotiate your way into working from home. But if you live in a city without a working-from-home culture, you may find it hard to arrange that setup for yourself. Denver ranks well because of the popularity of working from home. According to Census Bureau estimates nearly 10% of workers work from home, an increase of 2.6% from 2013. The unemployment rate here is also low, only 3.2%, so securing work where you can telecommute should not be exceptionally difficult in Denver.

Two Phoenix metro area cities take the second and third spots, with Gilbert just barely beating out Chandler to secure second. Gilbert has a significant number of workers with a zero-minute commute. Specifically, almost 8% of workers work from home. According to the Census Bureau, that figure is also on the rise. From 2013 to 2017, the number of people working from home in Gilbert grew by 1.6%. Jobs here, whether they involve working at home or not, are plentiful and well-paying for the most part. Gilbert ranks in the top three for the unemployment rate and poverty rate.

Chandler looks much like Gilbert from a statistical point of view. Low unemployment rates, along with low poverty rates, are features of working in Chandler. Working from home is also fairly popular. Around 7.7% of all employees worked from home in 2017. Chandler and Gilbert differ mainly in two areas: opportunity and affordability. Chandler is more affordable than Gilbert but offers slightly higher unemployment and poverty rates.

Not all occupations are suitable for working from home. Most manual labor jobs certainly are not, and any white-collar occupations requiring face-to-face interaction are probably not suitable either. But jobs like software developers that have independent workflows and allow you to handle meetings over the phone are good candidates to provide a nice work-from-home situation. Austin has a large population of software developers, which may partially explain why nearly 9% of all Austin workers work from home. For that metric, Austin ranks fourth. Working from home has also become more popular in Austin recently, and we may see it become even more popular, making it a great place to end up if you want to establish your career from home. From 2013 to 2017, the percentage of employees working from home grew by 1.7%

Scottsdale is the working-from-home capital of America. According to our data, one in eight workers here report working from home. Apart from the large number of telecommuting jobs, Scottsdale also ranked in the top five for unemployment rate and poverty rate. Scottsdale even ranks 16th for housing costs as a percent of income, making it the most affordable city relative to income, in the top 10. But if you are someone who likes to work from home at a coffee shop or bar, Scottsdale may not offer a ton of variety. This city ranked in the bottom half for coffee shop and bar density.

Seattle has a little bit of everything. More than 7% of employees work from home, a top-20 rate. Seattle also ranks in the top 20 for unemployment rate and poverty rate. It also ranks in the top half for housing costs as a percent of income, coffee shop density and bar density. In fact, Seattle only ranks below average in the growth of employees working from home, and even in that metric, it ranks 53rd.

Rounding out our list is the largest city in North Carolina: Charlotte. This city has a large and growing population of non-commuters. According to surveys compiled by the Census Bureau, nearly 8% of the workforce works from home here, a figure that is up 2% from 2013 to 2017. In both of those metrics, Charlotte ranks in the top 10. Including the low poverty rate, Charlotte takes a top-20 spot in three different metrics. Only the dearth of coffee shops keeps Charlotte from a higher ranking. 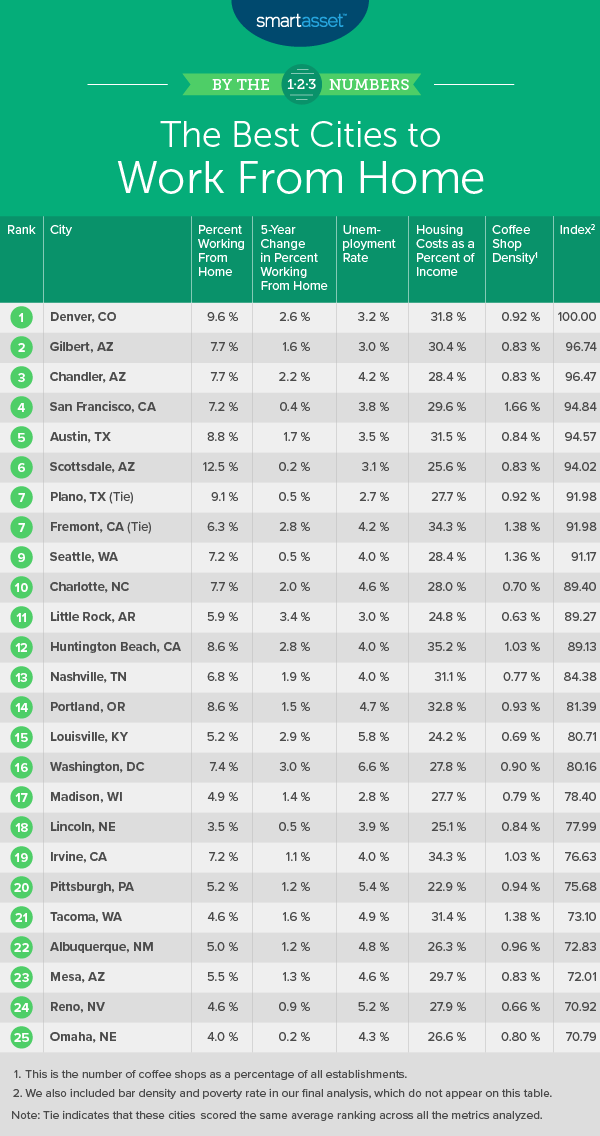 In order to rank the best cities to work from home, we looked at data for 97 cities. Specifically, we compared them across the following seven factors: