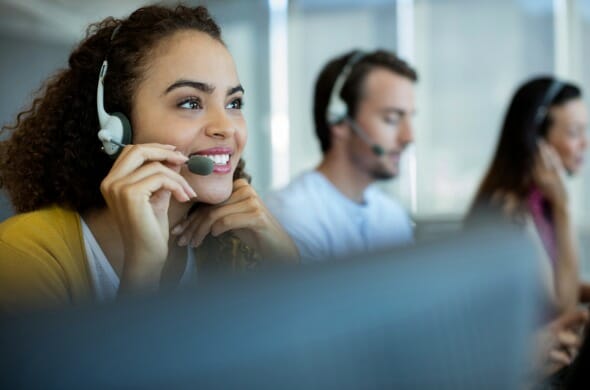 Few things are more frustrating than trying to get in touch with your bank when something has gone wrong with your checking account or savings account. But when handling bank account-related problems, whether it’s an issue like identity theft or something as simple as needing to change account information, some banks handle their customers’ requests better than others. Below we look at the banks with the best customer service records when it comes to handling bank account disputes.

In order to rank the best banks at handling consumer complaints, we looked at data from the CFPB (Consumer Financial Protection Bureau). We compared the banks across four factors: response rate, consumer dispute rate, closed with relief rate and explanation rate. Check out our data and methodology section below to see where we got our data and how we put it together. 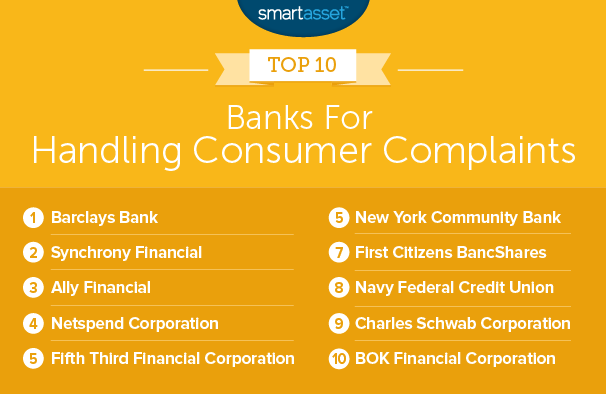 Barclays tops our rankings of the banks with the best customer service. According to our data, Barclays Bank responded to every single consumer complaint in a timely manner. In addition to responding to complaints on time, the bank also typically offered a resolution that the consumer accepted. Data from the CFPB shows that only 15.5% of consumers disputed the resolution from Barclays, the 11th-best score in our study.

Apart from the great customer service, consumers banking with Barclays also have access to some of the most competitive certificates of deposit rates.

The bank also excelled at coming to a resolution with its customers. According to our data, over 11% of complaints were closed with some kind of relief for the consumer lodging the complaint.

Ally is another online-only institution that offers its customers some of the best online checking accounts in the market. This financial institution took the third spot thanks to its low dispute rate and high compensation rate.

The bank offered some kind of compensation to just over 17% of its customers. Consumers tended to accept the resolution offered by Ally and only disputed 13.6% of complaint outcomes. For both of those metrics, Ally ranks in the top 10.

Netspend took fourth. This company is primarily known for helping customers build credit through pre-paid debit cards. This company offering a tailored explanation for over 88% of consumer complaints it received.

Another reason Netspend Corporation ranks so high is the low dispute rate. Only 9.5% of consumers disputed Netspend’s resolution to their complaint, the second-lowest rate in our study.

The bank’s best score came in its explanation rate. It responded to complaints with a tailored explanation over 68% of the time according to CFPB data, the 13th-highest rate in the study.

New York Community Bank is a bank headquartered in New York with branches extending into New Jersey, Ohio, Florida and Arizona. As of 2016, it had $48.93 billion in total assets.

Like some other banks atop this list, New York Community Bank had a 100% timely response rate. This bank also offered a personalized explanation in over 85% of complaints.

First Citizens has branches concentrated in the West and the South. This bank tends to manage customer complaints by offering relief for customers. In total just under 8% of all complaints were closed with relief, a top 25 rate.

This in part led to mostly satisfied customers. Just under 17% of consumers disputed the outcome of their initial complaint.

It is a tight race for the last three spots in our top 10. Navy Federal Credit Union beat Charles Schwab and BOK Financial for eighth by only 2 points on our index.

Navy Federal Credit Union owes its place in this top 10 due to the high value it places on constructing personalized responses to consumer complaints. Just under 82% of all complaints are responded with a personalized explanation.

Charles Schwab is one of the most recognizable names on this list. In total Charles Schwab responded to 100% of its banking service complaints on time and provided an explanation in 90% of incidents.

However, 0% of consumers making a complaint received financial relief, hurting its overall score.

In order to rank the best banks for customer service, we looked at data for 59 banks which had at least 90 complaints in the bank account or service category in the CFPB’s consumer complaint database. We compared the banks across the following four metrics:

Data for all metrics comes from the CFPB consumer complaints database and is from 2012 – 2017.

Tips for Getting the Most out of Your Savings Account