The Most Dangerous Jobs in the U.S. 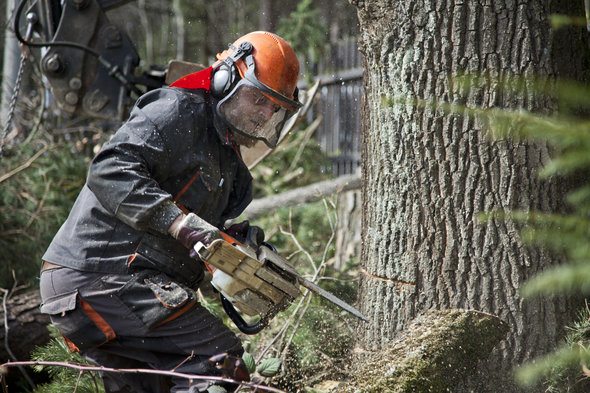 There were 4,821 fatal occupational injuries in America in 2014. That’s a 5% increase from 2013, according to the Bureau of Labor Statistics. While all workplaces take precautions to limit fatal accidents, there are some occupations for which the risk of fatal accidents is unfortunately much higher.

Find out how much life insurance you need.

Logging is the most dangerous occupation in the U.S. with a fatality rate of 89 per 100,000 workers. Logging is physically demanding and requires large portions of time spent outdoors in potentially hazardous areas. According to the Bureau of Labor Statistics, most fatalities among logging workers occur from falling logs or contact with a machine. Logging workers earn a yearly median income of $36,210. That’s in contrast to the overall median income for full-time workers in the U.S. which is $44,819. Most logging work is done in the Pacific Northwest in the evergreen forests of Washington and Oregon.

The Discovery Channel produces a show called “The Deadliest Catch” which highlights the dangers of high seas fishing. The fatality rate for fishers and related fishing workers is 81 per 100,000 workers. The majority of on-the-job fatalities among fishers occur from drowning. Another concern for fishers is that when accidents occur workers are often far out at sea where access to medical facilities may be limited.

The fatality rate for this occupation is 54 per 100,000 workers – almost 30% less than the fatality rate for the occupations in the first two positions. Commercial pilots face risks from hazardous weather as well as long overnight flights, but flying non-commercial aircraft is often more dangerous. Non-commercial pilots are involved in firefighting and crop dusting, both of which require flying at low altitudes with a higher chance of fatal accidents. Due to the dangers, plus the high skill level required for flying aircraft, pilots and flight engineers make an average of $117,290.

Related Article: The Top 10 Jobs for Salary and Growth

Roofers had a fatality rate of 38 per 100,000 workers over the 2011-2014 timeline. Most fatalities among roofers occur from slipping from scaffolding, ladders or roofs. Interestingly, the Bureau of Labor Statistics predicts that roofing will experience a 13% job growth over the next decade, which is higher than average. The occupation pays $36,720 on average.

6. Farmers, ranchers and other agricultural managers

Farmers, ranchers and other agricultural managers “operate establishments that produce crops, livestock and dairy products,” according to the Bureau of Labor Statistics. Workers in this occupation had a fatality rate of 24.7 per 100,000 workers over the 2011-2014 period. While farming may sound relatively safe, there are dangers involved with operating the heavy machinery required for mass production. Farmers make $64,170 per year on average, and around 70% are self-employed.

Truck drivers and driver/sales workers experience a fatality rate of 23 per 100,000 workers. This occupation can be dangerous because driving long hours may become tiring and result in vehicular accidents. Workers in this occupation make $27,760 per year on average.

Other than facing the obvious danger of electrocution, workers in this occupation also need to get over their fear of heights. Although they typically use bucket trucks, electrical power-line installers and repairers occasionally have to climb utility poles by hand. Alabama has the highest concentration of electrical power-line installer and repairer jobs in the country at 2.06 per 1,000 jobs.

These are people who work under the farmers, ranchers and agricultural managers who we discussed earlier. These workers may have less dangerous jobs than farmers and ranchers because they spend less time operating the heavy machinery which pose the greatest threat to people working on farms. These workers also face danger from livestock. Overall, this is the lowest-paying occupation in the top 10 with an average annual salary of $20,090 or about $9 per hour.

In order to rank the most dangerous jobs in the U.S., we gathered data in the following two metrics:

We used these two metrics to calculate the number of fatalities per 100,000 workers in each occupation.  To do this, we divided the total number of fatalities by the total number of hours worked and then multiplied the result by 100,000 (to account for 100,000 workers) and then by 2,000 (to account for the estimated number of hours each employee worked per year). We assumed that each employee worked 40 hours per week for 50 weeks per year.

For the sake of clarity, we excluded a few vaguely worded occupations from the final ranking. We also did not include occupations for which we did not have complete data over the four-year time period. For example, we have data for mining machine operators in 2013 but not in 2014. As such, they were not included in the final table.