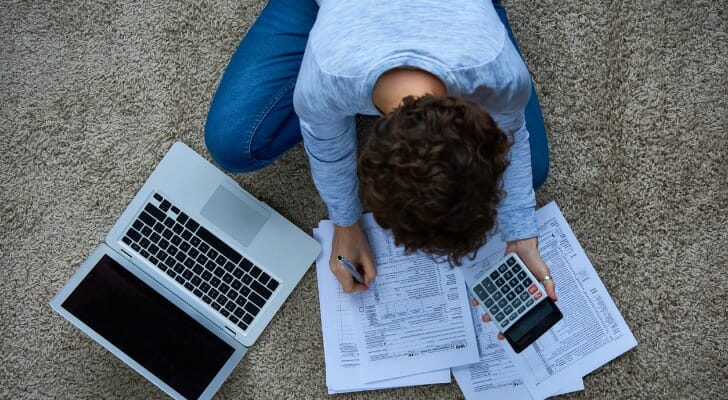 About 75% of American taxpayers overpaid on taxes in tax year 2016, according to IRS data. And though they may have been overjoyed to get a handsome tax refund, this scenario means they are simply being reimbursed for money they’ve lent the government. This tax season, whether or not an individual has a windfall on the way depends on his or her tax-planning savvy, but residents of certain states overpay more on their taxes and thus get higher refunds.

In order to rank the states with the largest average tax refund, we examined data on two factors. Specifically, we looked at the total number of returns with overpayments and compared it to the total amount overpaid. Check out our data and methodology below to see where we got our data and how we put it together to create our final rankings. 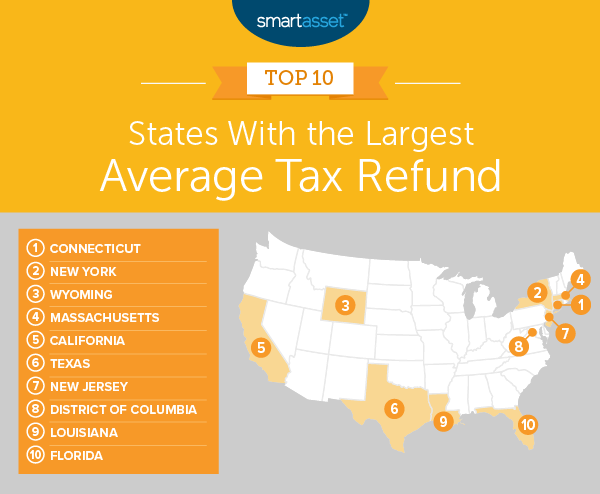 Connecticut tops the ranking as the state with the highest average tax refund. This state piles on an additional income tax rate between 3% and 6.99%. This state also has an average effective property tax rate of 1.97%. In total, about 1.3 million Connecticut taxpayers received a tax refund, according to IRS data, worth a total of about $5 billion. On average, that leaves the average tax refund here at $3,844.

New York is another state with a fairly progressive income tax rate. Residents who live in the city of New York must also contend with an additional city tax on top of the state and federal income taxes. Our analysis of IRS data shows about 7.2 million New Yorkers received a tax refund and, on average, received a tax refund equal to slightly less than $3,800.

The Cowboy State is a fairly small state population-wise, and 202,160 taxpayers received a refund according to our latest numbers. But that figure also represents just under 81% of all tax returns, an above average figure. IRS data suggests that those 202,160 Wyoming taxpayers overpaid by $3,784 on average. A tax refund of nearly $3,800 would make a nice sum to invest or place in a high-yield savings account.

Massachusetts levies a flat income tax rate of 5.1% on its citizens. That means whether you are a high-earner or a low-earner, you can expect 5.1% of your income to go to the state government. The statewide sales tax is on the low side, which offers some respite to taxpayers stretched thin. IRS data reveals that, on average, the average taxpayer who overpaid on taxes received a tax refund equal to $3,477 in the Bay State.

Income taxes in California range from 1% to 13.3% based on your income. Sales taxes too are high, ranging from 7.35% to 10.25% depending on where you are purchasing your goods. The good news for taxpayers here is tax refunds are common and sizeable. More than 72% of taxpayers saw some kind of tax refund and, on average, received $3,439.

The Garden State has a progressive income tax rate and one of the highest property taxes in the country. Taxpayers here, according to IRS data, are also used to overpaying on their taxes. On average, taxpayers in New Jersey overpay by about $3,407. Around 77% of taxpayers overpay, slightly above the national rate.

The average tax refund in Washington, D.C. was just under $3,400. In total, about 253,000 people received a tax refund here. Unfortunately, $3,400 may make less of a dent in a typical taxpayer’s expenses, given that the nation’s capital has one of the highest costs of living in the country. The average rental in D.C. costs more than $1,400 per month.

The average taxpayer in the Sunshine State who overpaid on taxes received a tax refund of $3,333. More than 7.3 million taxpayers paid too much in taxes, and the IRS returned $24.4 billion back to Florida. That’s a good chunk of change Florida residents could put to work in retirement or brokerage accounts.

In order to find the states with the largest average tax refund, we looked at data for all 50 states and Washington, D.C. Specifically, we looked at the following two metrics: