The Economics of Yoga 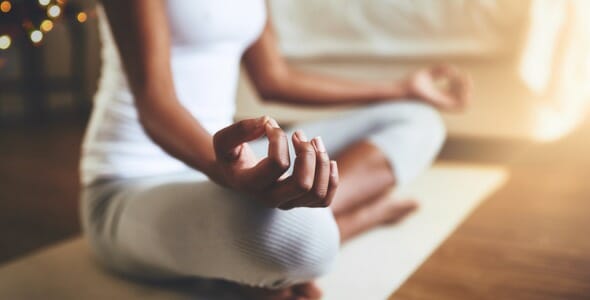 Despite all of its traditions and connections to spirituality, yoga is a very physical activity that can produce fantastic results. Prolonged and consistent practice of yoga has proven to increase muscle mass and flexibility. Similar to anything else that can produce tangible results, a very large and lucrative industry has sprung up to feed the demand for yoga related products and services.

Those are fantastic numbers for any industry especially one that is able to combine healthy living, reduced stress levels and a sense of community. For entrepreneurs, especially lifestyle entrepreneurs, yoga inspired businesses can be particularly rewarding to build.

In 2008 Mike Patton was a hot shot investment banker working at Bear Stearns. When the subprime mortgage crisis hit he found himself unemployed, stressed out and without a clear career path. He turned to yoga and instantly became a fan of both the mental and physical benefits.

However, unable to find the right studio that didn’t take itself, or its spirituality too seriously, Mike set out to fill the gap and create the perfect studio. It would cater to young professionals and students, be located in lower Manhattan, and offer a sense of community and accessibility lacking among established studios.

With the help of his father he created Yoga Vida and opened his first studio in Union Square in a 4,500 sq ft space. The classes were designed to be light and fun, free of forced spirituality, or the pretention of high end yoga studios already in business across the city. 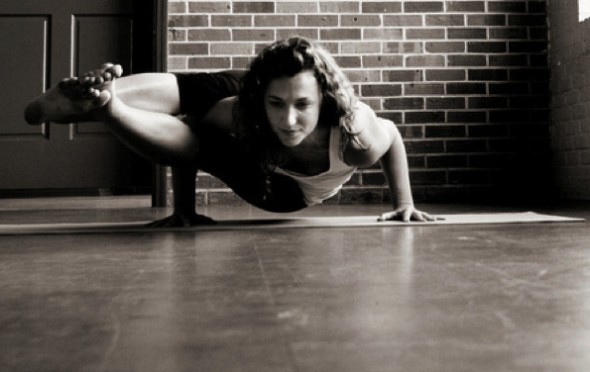 So how did Yoga Vida go from a self-funded small business idea to one of the most popular yoga studios in lower Manhattan? Simple, economics.

Running a yoga studio comes primarily to throughput.  In other words, a studio must attract a sufficient number of aspiring yogis to cover the considerable fixed and variable expenses of rent and personnel.  To illustrate the economics of running a yoga studio Mike helped us outline what would be needed to open and run a typical studio in New York City. We’ll call our hypothetical studio SmartYoga (trademark pending).

At SmartYoga, we’ve been fortunate enough to find a 4,000 sq ft studio in SoHo.  Rent is $55 per square foot or about $18,350/ month.   Like Yoga Vida, SmartYoga charges $14 for drop-ins, $8 for students and has multiple membership plans.  To keep the math simple, SmartYoga makes a weighted average of around $10/person/class.  The other key revenue driver for SmartYoga is teacher training.  Currently, we offer courses quarterly at $4,000.

Besides rent our other big expense is people and admin (including insurance and taxes).  We need about 10 teachers and 5 admins to support check-ins and generally help out.  The staff generally costs SmartYoga about $30,000 per month.

Simply put, if you’re thinking about becoming a yoga studio owner in NYC, you should take a close look at the table below and think hard about your ability to get more than 200 people per day to enjoy your yoga classes. 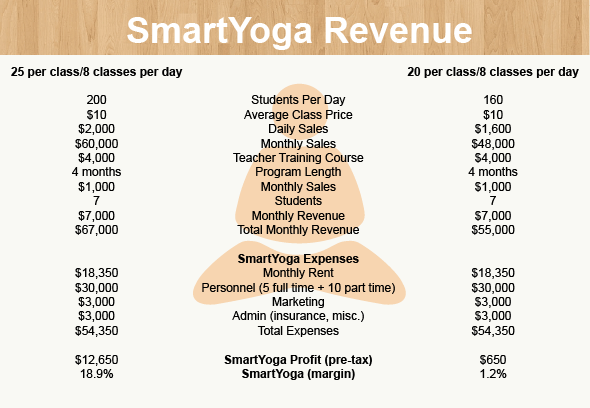 Yoga Vida was immediately competitive, offering rates of $8 per student and $14 for drop ins.  This is a notable discount from many New York studios, where classes can top $30. The size of their first studio, a spacious 4,500 sq. ft, opened in pricey Union Square in 2010 at around $50 per square foot.

This allowed Yoga Vida to offer both large and small classes. Over the course of a given day they accommodate as many as 250 students. In 2011, Yoga Vida opened a second 8,000 sq ft studio just 10 blocks away in NOHO.

For Mike, the long term key to running a successful yoga business isn’t so much offering classes to working stiffs like you and me three times a day. The real engine driving the business of yoga is turning working stiffs into yoga evangelists- people who want to learn more about yoga and encourage others join in the experience of yoga.

These evangelists buy quarterly or annual memberships and many eventually become instructors themselves. In turn they spread the word, helping to build a community and ultimately create a positive feedback loop that creates more evangelists.

Yoga Vida’s teacher training programs range from $1,500 to $9,000 each depending on the class, level of intensity and style. The training programs are ultimately the life blood of a New York City studio like Yoga Vida, who’s day to day to survival relies heavily on sustainable and scalable revenue streams to stay competitive.

Though this sounds like an incredibly appealing way for newly founded studios to generate revenue on opening day, Mike cautioned new owners from depending too heavily on this for income, “This strategy doesn’t really work for new studios.” Mike told us.  “We waited until we had a strong following before offering these classes. Offering to train teachers but then having no one to fill the classes makes for a really bad experience. That’s not something you want when starting a business in a competitive marketplace”

Without some level of size, selling curriculum to prospective teachers will typically lead to a less than fulfilling experience for the instructors. After all, the biggest nightmare for any teacher is not having anyone to teach. 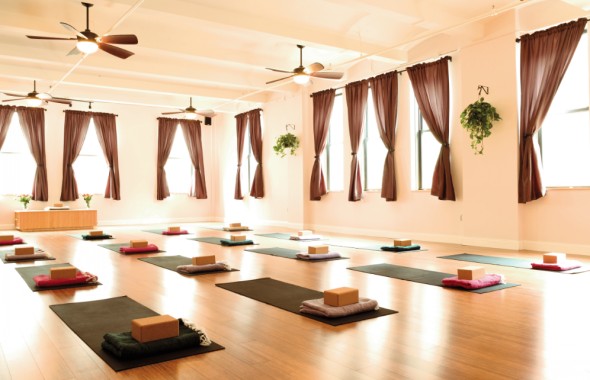 Similar to buying a home, the biggest factor in determining how big a yoga studio can get, or how quickly it can expand comes down to taxes and local building authorities. For Yoga Vida the biggest obstacle to continuing to provide services to the New York City area has been the New York City Department of Buildings.

“Government inefficiencies, unknown red tape, indecision and inability to manage the expectations of the small business owner makes our lives much harder than they need to be,” said Mike. With rental expenses already consuming 40-45% of revenue, the additional taxes levied by the City of New York really hurt small business owners, especially when the amount can increase as much as $10,000 every year.

The rest of Yoga Vida’s expenses are focused on running and managing his staff.  The studio spends another 30-35% on keeping full time and part time staffers happy (paid), and developing curriculum. The remaining 20% of the revenue goes towards maintenance and marketing.

The Future of Yoga

For Yoga Vida it’s become clear there better opportunities outside of acquiring more real estate. With that in mind Mike Patton plans on spread Yoga Vida’s passion for yoga online. For $10 a month, Yoga Vida will stream its classes, helping the studio and its instructors reach more people than it ever could physically.

For our part, we’re excited to see how entrepreneurs like Mike can combine one of the oldest forms of physical and spiritual exercise with the distribution power of the web. Who knows what burgeoning business that fusion may create.

Update: Saving up enough money so you can reach your financial goals and enjoy your hobbies along the way can be tricky. So many people reached out to us saying they wanted help with financial planning, that we built a tool to match you with a financial advisor who can meet your needs. First you answer a series of questions about your situation and your goals. Then the program narrows down thousands of advisors to three fiduciaries who meet your needs. You can read their profiles to learn more about them, interview them on the phone or in person and choose who to work with in the future. This allows you to find a good fit while doing much of the hard work for you.