The Best States for an Early Retirement – 2016 Edition

Many people look forward to the day they can hang up their work clothes for good and enjoy their golden years. For most people, retirement occurs sometime in their late 60s or even their 70s. However, with careful planning and prudent financial management, it is possible to retire even earlier. There are many factors at play when determining whether a place is suitable for an early retirement. First and foremost are financial concerns.

If you are retiring early, you’ll need to make sure you have enough saved for housing, healthcare and enough left over to eat and live comfortably. In order to get the most out of what could be a limited retirement income, you’ll want to stretch your dollars to their max and make a retirement budget. States with low taxes on retirement income and low property taxes enable you to do that. And after making the most efficient use of your dollars, you will probably want to make sure you have activities to do in your free time. Plus, in order to get the best healthcare during older age, the availability of doctor’s offices is important. We looked at all these factors in order to create our ranking of the best states for an early retirement.

In order to understand where we got our data and how we put it together please read the data and methodology section below. 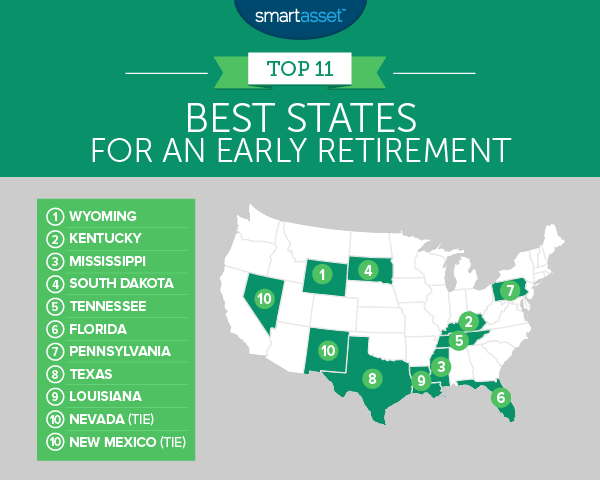 Wyoming jumps two places from last year to take the top spot in our study of best places for an early retirement. This state offers an effective tax rate of 0% on retirement income and has the third-lowest non-housing cost of living. To go with the relatively cheap living costs, Wyoming also has 73 arts, entertainment and recreation establishments per 100,000 people. That score ranks fifth in that metric. What hurt Wyoming (although not enough to prevent it from snagging first place) is the relatively high average healthcare costs. Wyoming ranks second to last in this measure paying an average of $11,000 per year. Only Alaskans pay more.

The Bluegrass State comes in a close second, thanks to six metrics scoring in the top 20 and its tax-friendly environment. Particularly attractive for prospective early retirees are the low costs of living. Kentucky ranks fourth in average housing costs per year at $8,600 and fifth in non-housing cost of living. But early retirees in Kentucky may need to develop some personal hobbies. According to data from the Census, there are only 28 arts, entertainment and recreation establishments per 100,000 residents, 44th best in the country.

Mississippi is the second-highest-rated Southern state and third-highest overall for best states for an early retirement. Mississippi is similar to Kentucky in that it is a cheap place to retire. It has a 0% effective tax on retirement income. It also has the lowest non-housing cost of living as well as the second-lowest housing costs in the nation. So why isn’t it first or second? There are only 22 arts, entertainment and recreation establishments per 100,000 people – the lowest in the nation. There are also not as many doctors’ offices in Mississippi as there are in other states. Our data shows that it ranks 33rd in this measure.

The Mount Rushmore State is another great option for an early retirement. Other than the gorgeous scenery, South Dakota can offer potential early retirees a 0% effective income tax and some of the lowest housing costs in the country at $8,900 per year on average. Besides gazing at Mount Rushmore, there are plenty of things to do. There are 79 arts, entertainment and recreation establishments per 100,000 residents – the second-highest in the nation.

The Southern theme continues with Tennessee claiming the fifth spot for best states for an early retirement. Tennessee is another state with a 0% effective income tax which is only partly offset by the nation’s highest average state and local sales taxes at 9.5%. Tennessee also has 6.55 doctors’ offices per 10,000 residents and 36 arts, entertainment and recreation establishments per 100,000 residents.

The state that is famous for its retirees and bad drivers comes in sixth place for best states for an early retirement. Florida ranks well because of its 0% income tax rate and the 9.15 doctors’ offices per 10,000 residents. But living costs in Florida can get pretty high. Average housing costs are almost $12,000 per year and the non-housing cost of living sits at 102 which rank 30th and 31st respectively.

Texas has a little bit of everything, meaning just about anyone can find themselves at home there. The Lone Star State has no income tax and the non-housing cost of living is low. The average cost of an annual silver healthcare plan in Texas is $6,626. That’s the 14th-lowest. However housing costs can get pretty high relative to everything else. The average Texan pays $11,600 per year in housing costs.

Louisiana has a lot to offer as a state for an early retirement. The third-lowest property taxes, seventh-lowest housing cost, ninth-lowest non-housing cost of living and eighth-highest rate of doctors’ offices in the country are all on offer for people looking to retire in Louisiana. Unfortunately, Louisiana is not a utopia for early retirees. There are relatively few arts, entertainment and recreation establishments per 100,000 residents and it has one of the highest sales tax rates in the country.

High rollers may be pleased to see Nevada crack our top 10. Nevada offers a 0% effective tax rate on income and has the sixth-most doctors’ offices per resident, meaning help is never far away. Living costs in the Silver State can be fairly steep though, including a combined $20,000 per year on housing and healthcare costs on average.

New Mexico is tied with Nevada as the 10th best state for an early retirement. New Mexico ranks well in the cost of living measures. It has the second-lowest average healthcare expense at $5,200 per year, as well as the 10th-lowest average housing cost at $9,300 per year. A potential drawback to retiring early in New Mexico is the lack of doctors’ offices. According to data from the Census Bureau, New Mexico has only 4.7 doctors’ offices per 10,000 residents, which ranks 43rd in the nation.

In order to rank best states for an early retirement, we focused on eight different metrics:

We ranked every state, plus D.C. in each of these eight metrics. We then averaged those rankings, giving double-weight to the effective income tax rates and half weight to doctor’s offices per 10,000 residents and to arts, entertainment and recreation establishments per 100,000 residents. All other factors were given a weighting of one. Finally we gave each state, plus D.C. a score between 0-100 based on the average of those rankings. The state with the best score received 100 while the worst scoring state received a 0.

Questions about our study? Contact us at press@smartasset.com.
Photo credit: ©iStock.com/mrsmuckers