The Best States for an Early Retirement – 2017 Edition 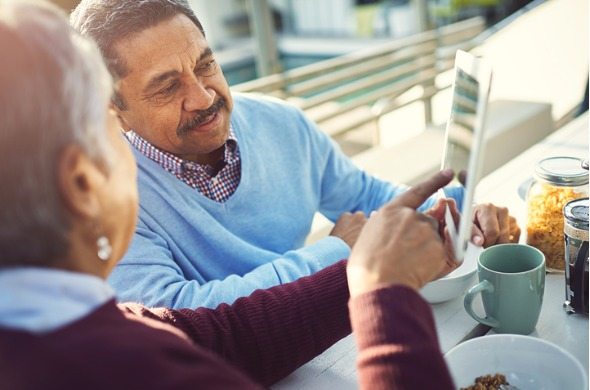 Do you want to retire early? Starting your golden years sooner may sound enticing but it’s a difficult proposition. You’ll probably need to earn a lot, and you’ll definitely need to save aggressively and budget carefully. There are some states in the U.S. that are better suited for retirees, where your retirement savings would go further. Below SmartAsset finds the best states for an early retirement in 2017.

Thinking about an early retirement? A financial advisor can help you reach your financial goals.

This is our third annual best states for an early retirement. Check out the 2016 edition of the study here. 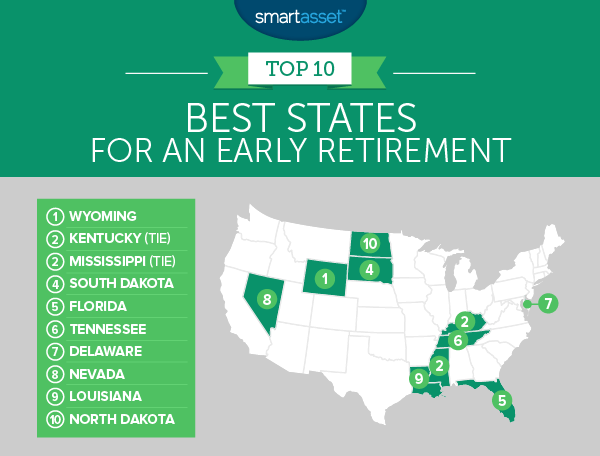 For the second consecutive year, the Cowboy State takes the top spot for the best state for an early retirement. The biggest plus to retiring in Wyoming is that you can expect to pay a 0% tax on your income. In fact, taxes in Wyoming are very low in general. If you buy property, you’ll only have to pay 0.61% in effective property tax on average. The sales tax here is also low. In each of those metrics, Wyoming has a top 10 score.

Plus, you probably won’t get bored living in Wyoming. Our data shows that Wyoming has the fifth-highest rate of entertainment establishments per 10,000 residents.

For the second year, Kentucky secures another silver medal in the best states for an early retirement. The Bluegrass State has an average effective income tax rate of 0.97%, which is slightly higher than other states but is not a bad score. The best part about retiring in Kentucky may be the money you can save on housing. According to our data, average housing costs here are the fourth-lowest in the country at about $8,700 per year.

Kentucky also has the 12th-lowest non-housing cost of living. Combine those two facts and it becomes clear that you can probably retire early in Kentucky without having an enormous sum in your 401(k).

Unlike some places, you don’t need to be a millionaire to retire in Mississippi. The Hospitality State welcomes all potential retirees with offerings of 0% effective income tax rates, the lowest average non-housing cost of living and second-lowest average housing costs in the country.

However be prepared to pick up some hobbies in your golden years. Mississippi, according to Census data, has the smallest concentration of entertainment establishments in our study. Access to healthcare in Mississippi may also be a cause for concern. There are only 5.5 doctor’s offices per 10,000 residents, the 15th-lowest rate in our study.

South Dakota is friendly to retirees. For one, it doesn’t tax retirement income. Secondly, it’s a fun place to hang out, at least relative to its population. There are just under eight arts, entertainment and recreation establishments per 10,000 residents, the second-highest rate in the country.

However South Dakota is another place that could work on improving access to healthcare. There are only three doctor’s offices per 10,000 residents in this state. That’s the second-worst rate.

The most popular retirement state takes fifth. Famously, Florida does not tax income. But more than helping you keep money in your pocket, Florida is vigilant about keeping its residents and retirees healthy. There is only one state in the country (New Jersey) with better access to healthcare. There are just under 10 doctors’ offices per 10,000 residents in the Sunshine State.

After all what’s the use of retiring early if you can’t stay healthy.

Plus, Tennessee is another state with a 0% average effective income tax. One concern: sales tax in Tennessee can make everyday items expensive. This state has the second-highest average state and local sales taxes.

Delaware managed to secure a top 10 spot despite having the 23rd-highest average effective income tax in our study. This is because it has stellar scores in other metrics. While retiring early in Delaware may mean paying more income tax, it also means paying no sales tax and the fifth-lowest property tax.

This state also has the 11th-highest concentration of doctors’ offices in the country.

A number of factors make Nevada a great state for an early retirement. First the state has an average effective income tax of 0%. It also has the 11th-lowest property tax rate in the country.

Furthermore, there’s good access to healthcare in Nevada. The state has the seventh-most doctors’ offices relative to population in the country.

Our tour of the best states for an early retirement heads back south to Louisiana. When it comes to costs of living, Louisiana is hard to beat. This state scores in the top 10 for both average housing and non-housing costs of living.

Louisiana does have the highest average state and local sales taxes in the country which hurts its score in this study.

This Midwest state rounds out our top 10. North Dakota has above average scores in six of our eight metrics. Standout scores include the concentration of arts, entertainment and recreation establishments (5.9 per 10,000 residents) and average housing costs ($9,228 per year).

In both of those metrics North Dakota ranks in the top 10.

In order to find the best states for an early retirement, we analyzed data for all 50 states and Washington, D.C. Specifically we looked at data for the following eight factors: