How Spending Changes in Retirement – 2018 Edition 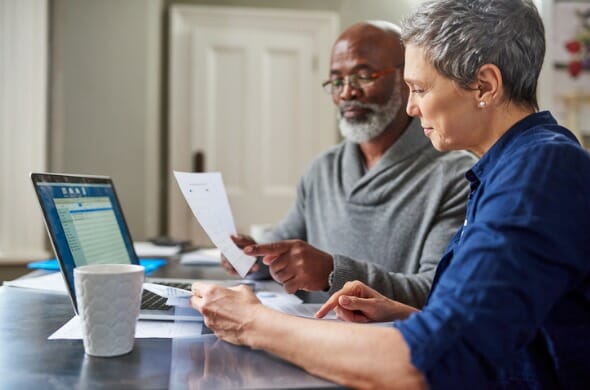 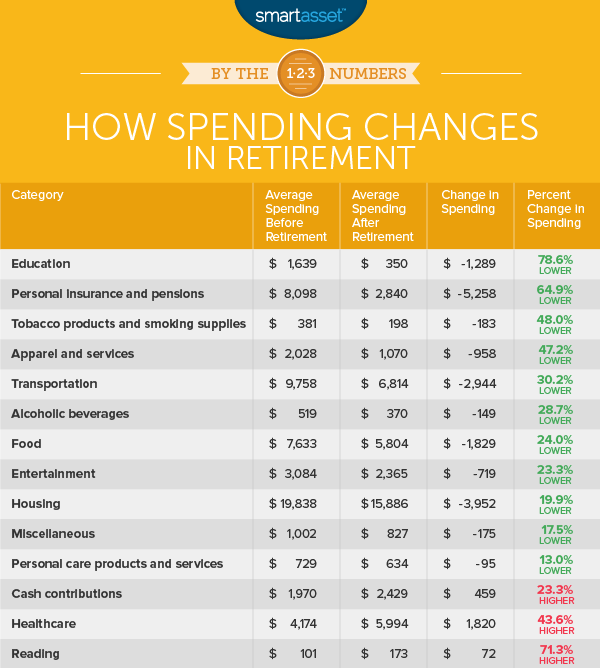 The average working household spends around $1,600 per year on education. In retirement that number drops dramatically to $350, a percent change of just under 79%.

According to our data the average under-65 household spends nearly $8,100 per year in this category. After retirement, spending in that category drops to $2,840. Specifically, this category tracks spending toward retirement programs, including Social Security and private retirement accounts.

According to CDC data, Americans over the age of 65 are the least likely to smoke, with only 9% of seniors reported to smoke. That is not only good news for their lungs but also their budgets. Tobacco products can be expensive especially when so-called sin taxes are tacked on.

According to our data when retirees need to trim the fat they look to their eating habits. On average, retired households cut their food budgets by about 25% compared to working households.

While every category takes a hit, the biggest savings for retirees comes from eating out less. In total spending on food away from home is 35% less for retired households compared to working households.

Spending on live events and toys falls in retirement by the widest margin. In both of those subcategories total spending falls by over 36% between working households and retired households.

Housing is where retirees save the most money. Retired households spend about 20% less than working households on housing. That equals savings of nearly $4,000 per year.

This category includes spending on a wide range of things from funerals to savings account fees to union dues to legal fees.

Spending in this category goes to any money sent outside the consumer unit. That can mean alimony payments, child support or support for children away from home among other things.

Retired households spend about $2,400 on items in this category compared to just under $2,000 for working households.

As you age, your health tends to worsen. So it makes sense that older households spend more on their healthcare than younger households. Retired households, according to our data, spend about $1,820, or 43%, more on health care than non-senior households.

Spending across all healthcare subcategories goes up in retirement but spending on health insurance and drugs make up the largest portion of the rise in spending.

Within this category the Bureau of Labor Statistics tracks spending on reading as a hobby. That means it includes spending on newspaper and magazine subscriptions, books and e-books and encyclopedias and other reference books. It does not however include spending on textbooks, which fall under the education category.

Retired households spend more on reading materials than working households, although not by much. The two groups are separated by only $72.

In order to find how spending changes in retirement we looked at data on all 14 major categories from the Bureau of Labor Statistics Consumer Expenditure Survey. To create our rankings, we looked at the percent change in spending in every category for households under the age of 65 compared to households over the age of 65. We ranked the categories from largest to smallest in descending order.

Data for all figures comes from the Bureau of Labor Statistics’ Consumer Expenditure Survey and is for 2016.