The Top States for Unclaimed Property 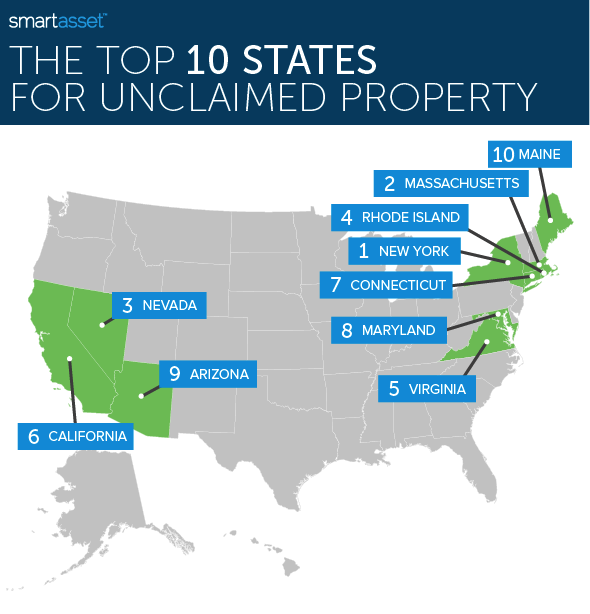 There are people walking around right now who are owed  hundreds, thousands, or in some cases even millions of dollars in unclaimed property. In fact you might be one of them. Let us explain…

Every year, thousands of businesses across the country find themselves in possession of money and property that has been lost or forgotten by the original owner. Abandoned savings accounts, trust distributions, payroll checks, insurance payments, royalty payments and numerous other types of valuable assets are turned over to state treasuries as unclaimed property. This happens if the holder is unable to locate or contact the owner after a period of inactivity of 3 to 15 years, depending on state law.

One of the largest sources of unclaimed property are orphaned 401(k) accounts, forgotten by employees after they leave their job. In many cases, the rightful owners are not only unaware that they have a claim, they are totally unfamiliar with the very concept of unclaimed property.

At SmartAsset, we specialize in helping consumers make smarter financial decisions. There’s no smarter decision than claiming money that is rightfully yours, which is why we wanted to bring some attention to unclaimed property by taking a closer look at the numbers involved.

In order to determine which states are holding the most unclaimed property, we collected data on the balances of each state’s unclaimed property fund. There is no single source for such information, which meant we had to research each state individually.2 In some states, however, no data on fund balances was readily available.

For those states, we projected statewide unclaimed property totals using a model we developed based on data listed by the other states. We found that mean income and the proportion of the population aged 60 or over correlated highly with unclaimed property totals, and we used those numbers to project fund balances in the 11 states for which we lacked data (none of which made our top ten list).

According to the New York State Comptroller, the state is currently holding $13 billion in unclaimed funds. That’s over $600 for every man, woman and child in the state—but many of the claims may be much larger than that. According to the comptroller, the single largest account ever paid was worth $4 million, and the largest unclaimed amount currently on the books is worth $1.7 million—almost enough to buy a two bedroom apartment in Manhattan.

Moving to New York? Find out how much house you can afford.

In September, the Massachusetts Treasurer announced that 54,000 properties had been added to the state’s unclaimed property fund, bringing the fund’s total value to $2.4 billion. That total is fourth highest in the country, despite extensive efforts to return unclaimed property over the past few years which returned a record $112 million to owners in fiscal year 2014. Nonetheless, the fund still holds enough money to buy a round-trip ticket from Boston to Miami ($360 if you fly through LaGuardia) for every person in the state.

Unclaimed property is the ultimate safe bet. By checking for your name with the National Association of Unclaimed Property Administrators (more info on how to do so is below), you stand the chance of receiving hundreds, and maybe even millions of dollars. If your name doesn’t turn up, however, you lose absolutely nothing! Those types of odds are hard to beat—and impossible to find in any of Nevada’s many casinos. The state is currently holding $800 million worth of unclaimed property, nearly $300 per resident.

Though Rhode Island has a population of just over one million people, it has an unclaimed property fund valued at over $275 million. The state Treasurer is working hard to return that money to its owners, and during fiscal year 2014 returned some $26 million to almost 12,000 claimants. That’s an average value of over $2100 per claim, enough money to make over two months’ mortgage payments on a typical Rhode Island property. (The average monthly housing cost in Rhode Island is $966, according to the U.S. Census Bureau.) The remaining unclaimed property fund works out to more than $261 per capita.

The state of Virginia holds over $1.5 billion in unclaimed property, which is roughly three times the net worth of Jay-Z. According to the state’s Unclaimed Property website, about 308,000 people have used the online search tool at VAMoneySearch.org to see if they have any unclaimed property held by the state—which means some 7.8 million Virginia residents have not. If you (or a relative) have ever lived in Virginia, we suggest you give it a try.

At $6.9 billion, the Golden State has the second largest unclaimed property fund (behind New York), but its status as the most populous state in the nation drops it to sixth highest when controlling for population. According to state Controller John Chiang, there are 24.9 million individuals and organizations with potential unclaimed property claims, meaning each claim is worth about $277. That’s the equivalent of 88 gallons of gas in Los Angeles, or a full four days of rent in a typical two bedroom apartment in San Francisco County. (Update: as of December 8, 2014, California’s unclaimed property fund increased to $7.1 billion. That means the state treasurer has another $200 million waiting to be claimed!)

Every year, the Maryland Comptroller sets up a booth at the State Fair to help Marylanders find their unclaimed property. In 2013, one lucky person found $30,000. There are likely many more accounts with values that high. The state currently holds upwards of $980 million for about one million accounts, which means, on average, each claim is worth $980 dollars, enough to rent a one bedroom apartment for a month in 11 of Maryland’s 24 counties. That works out to more than $166 per person in Maryland.

According to the state of Arizona, if you have ever been a resident of the state, you have a one in seven chance of having property in the state’s unclaimed property fund. Though the fund has about $150 for each current Arizona resident, successful claims are likely to return much more money than that, as there are only about one million names on the state’s list.

Like many of the states we researched, Maine’s unclaimed property fund is growing. During fiscal year 2014, the Maine State Treasurer paid out $11.5 million in claims, but received $22.4 million from unclaimed property holders. That left the fund with a balance of $200.6 million, or about $151 for each of Maine’s 1.3 million residents. Some of the claims could be much larger than that, however—the largest claim paid out last year was worth $266,706. That’s enough cash to buy a typical house in Maine’s largest city, Portland. (The average housing value in Portland is $230,000, according to the U.S. Census Bureau.)

How to Make a Claim

The National Association of Unclaimed Property Administrators operates a free, national search tool at MissingMoney.org, which is very easy to use. That’s a good place to start, but not every state is included in the national search, so if that doesn’t turn up any results, you may want to try the websites of any states in which you have lived (not just where you currently reside). Most states have an online search tool associated with their state treasury department or their comptroller. When searching for your unclaimed property, be wary of scams. You should never have to pay any kind of fee or charge to find your own property.

1. FedEx has a market capitalization of $49.55 billion, as of this writing. According to the website celebritynetworth.com , Justin Beiber’s net worth is $200 million. The average U.S. home value was $173,200 in 2013, according to the U.S. Census Bureau.

2. States maintain different schedules for releasing their unclaimed property fund totals, so we used the most recent number available at the time of this writing. All data is current as of November 2014.