The Top Ten Cities for First-Time Homebuyers in 2015 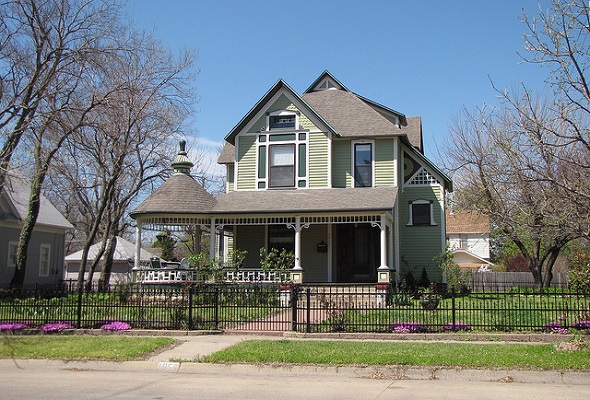 As we move into spring, many potential first-time homebuyers will be eyeing their local housing market and trying to decide if now is the time to make the leap to homeownership. For most, it is the financial decision of a lifetime—a home, after all, is not only a place to live, but a significant investment in the sometimes volatile housing market. New homeowners, who usually have shorter credit histories, smaller savings accounts and lower incomes, need to be especially sure that they are making a good decision.

At SmartAsset, we make the home-buying process a little simpler by providing accurate, personalized answers to questions like how much house can I afford? and what will my closing costs be? Among the most important factors to consider when buying a first home, however, is location. Some markets provide the affordability, accessibility and stability that are so important for new entrants into the housing market, while others may be too risky or too expensive for first-time homebuyers.

Buying a house? Compare mortgage rates to get the best deal.

To find the best cities for first-time homebuyers, we looked at data on every US city with a population larger than 300,000 people.1 We considered five metrics covering three overarching factors in our analysis: affordability, accessibility and stability.

Affordability (40% weight). Do buyers in this market face reasonable prices? And do they get good value for the money they spend? We combined SmartAsset’s Home-Affordability Index with Census data on the average bedrooms per house in each market to reflect the cost and value of housing in each market.

Accessibility (30% weight). How accessible is financing in this market? We considered the loan funding rate (mortgage originations as a percentage of mortgage applications) as well as the number of HUD-approved FHA lenders in each market—more lenders means more opportunities for approval.

Stability (30% weight). Is this a healthy housing market? Does it have good prospects for steady, long-term growth? We used SmartAsset’s nationwide Healthy Housing Markets Index, which considered market fluidity, foreclosure risk, length of ownership and other factors to capture overall market health.

For each of the cities in our study, we combined those three factors to produce a single index, scaled from 0-100. The results, below, are the Top Ten Cities for First-Time Homebuyers. 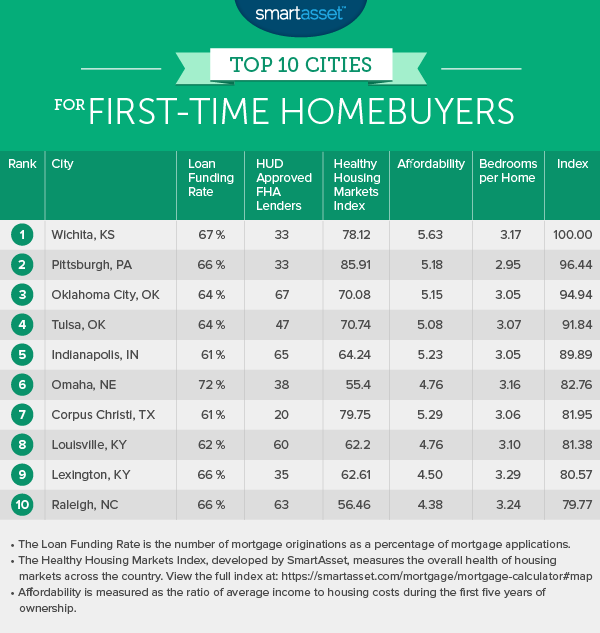 The largest city in the state of Kansas, Wichita is known as the “Air Capital of the World” because of its long history as a major producer of aircraft. Though the city’s health care industry has been expanding in recent years, manufacturing remains the largest sector, with aviation playing an especially important role. Wichita ranks in the top ten of major US cities in three of the five metrics we considered, including first overall for affordability.

Potential homeowners take note: according to data from the Federal Housing Finance Agency, Pittsburgh was one of the few cities in which housing prices remained relatively steady during the housing crisis. That housing stability is a reflection of Pittsburgh’s strong economy. Once the nation’s premier manufacturing hub, the Steel City’s economy has diversified in recent years, with the healthcare, finance and tech sectors growing substantially. Job growth means more demand for housing, which means prices are less likely to decline—even during a recession.

While Oklahoma City is the 27th largest city in the United States by population, it is the eighth largest city by land area. That means property is less expensive—ideal for potential homebuyers looking to enter the market for the first time. Our data shows Oklahoma City as the fifth most affordable major city (city with a population greater than 300,000) in the United States. Typical housing costs over the first five years of ownership, including taxes and closing costs, account for less than one-fifth of median household income in OKC, as compared with a national average among big cities of about one-third average income.

Tulsa is a city of neighborhoods, and offers enough variety for new homeowners to find the perfect place to settle down. Midtown has a large stock of early 20th century homes, and has several popular parks like Woodward Park and Swan Lake. South Tulsa is known, among other things, for its churches: many of the largest churches in the city are in this part of town. Wherever new homeowners wind up, they should be able to pay an agreeable price. Tulsa rates as the seventh most affordable major U.S. city in the country.

Over the past few decades, Indianapolis has made a concerted effort to revitalize its downtown area, a strategy that culminated in the 2012 Super Bowl, which the city hosted to widespread acclaim. Today, downtown Indy is a cultural and commercial hub, and development is expected to continue in coming years. Outside of the downtown area, Indianapolis offers potential homebuyers great affordability. Housing costs over the first five years of ownership are less than 20% of average income, making Indianapolis the third-most affordable major city in the U.S.

Omaha is Nebraska’s economic capital, boasting five Fortune 500 companies, including native Omahan Warren Buffett’s mega-conglomerate, Berkshire Hathaway. Mr. Buffett, the “Oracle of Omaha,” is famous for his commitment to his birth-city. To this day, he still lives in the same Omaha home he purchased in 1958 for $31,500. While new homebuyers may not have quite the same net worth as Mr. Buffett they should still have a good shot at getting approved for a mortgage loan. Omaha has the highest loan funding rate of any major city in the country.

Located on the Gulf of Mexico, Corpus Christi is home to the fifth largest port in the United States. The port, along with the Naval Air Station located in Corpus Christi, give the city’s economy a stable foundation and make it less susceptible to economic downturns. Throughout the recent recession, the unemployment rate in Corpus Christi remained about one percentage point lower than the national average. That economic stability in turn makes the city’s housing market more stable. Corpus Christi ranks 7th out of the cities in this study for SmartAsset’s Healthy Housing Markets Index.

With a population of over 600,000, Louisville is the largest city in the state of Kentucky. The city owes its original growth to its strategic location at the Falls of the Ohio, which, before the construction of the McAlpine Locks, required passing ships to unload their cargo before continuing through the treacherous stretch. Today Louisville is a vibrant metropolis, perhaps most famous as the home of the Kentucky Derby, an annual horse race that has been called “The Most Exciting Two Minutes in Sports.”

While Lexingtonians may not be pleased that their cross-state rivals have them bested (by a mere 0.81 points) when it comes to affordable, stable and accessible housing, they can take solace in the relative sizes of their homes. Houses in Lexington have an average of 3.3 bedrooms, the fifth most of any major US city—which means that, in practice, Lexington has a higher proportion of 4 and 5 bedroom homes than most other cities. (Louisville ranked just 24th in the country by that metric.)

Check out the most recent version of SmartAsset’s study of the best cities for first-time homebuyers.

1. We treated the five boroughs of New York as separate cities. At least where housing is concerned, they are for all intents and purposes distinct markets.