The Most Politically Engaged States – 2016 Edition 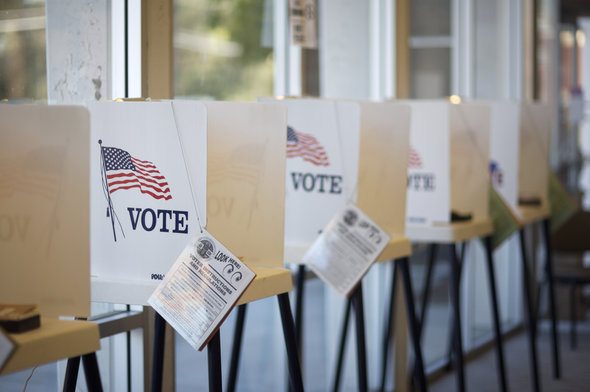 November is just around the corner, which means it’s almost time for Americans to go out and vote. However, there is wide disparity in voter turnout across the 50 states. In 2014, some states had as little as 33% voter participation while others had as high as 61%.

Voting is really a two-step process: first you register to vote and then you cast your ballot. Someone who registers to vote but doesn’t actually vote can still be considered more politically engaged than someone who never registered at all. And, of course, voting isn’t the only way to be an engaged citizen, you can also donate to campaigns and volunteer. So states with high numbers of voter registration, voter turnout and campaign donations can be said to be politically engaged.

With these factors in mind, we at SmartAsset crunched the numbers to find out which are the most politically engaged states.

This is SmartAsset’s second study on political engagement. Read the 2014 version here.

To determine the level of political engagement in each state we looked at data on six separate factors. (Note: We included additional factors this year, so this study is not directly comparable to the 2014 study.)

The index, on a 100-point scale, was calculated based on each state’s ranking in each of the six factors.

Find out how much life insurance you need. 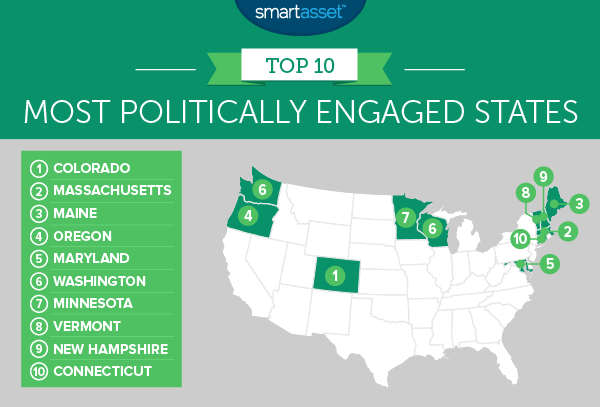 Colorado is one of the closest races during this year’s presidential election and, as a result, is one of the key swing states. It ranks highly in all the engagement categories we looked at. According to metrics like voter turnout, Colorado is becoming more engaged. The state ranked 9th in voter turnout in 2010 and 2nd in 2014.

Coloradans are generous, too. After controlling for population and income, we found that Colorado citizens donated the 5th most in the 2012 presidential election. That year, Colorado had an impressive 70.4% voter participation.

Massachusetts is an interesting place, politically speaking. Judging by its presidential voting record, one would assume Massachusetts is a very liberal state. But since 1991 it has only had one democrat for governor. The Bay State came into national focus when former Republican Gov. Mitt Romney ran for president in 2012 and he was forced to step back from the liberal-leaning health care reforms he helped put into place. That year 70% of the state’s voters turned up at polls.

Want to retire? Find how much you should be saving.

Maine, like Colorado before it, will have the opportunity to legalize marijuana this year. It will be interesting to see if that mobilizes the citizenry in the same way it did in Colorado. In the meantime, Maine is already a very politically engaged state. It ranked first for voter turnout in 2014 and 2010, with 61.5% and 59.4% of the citizenry coming out to vote, respectively. Curiously, Mainers do not get as energized by presidential elections as some other states. In 2012, Maine had a voter turnout of 68% – only good enough to rank 9th in the country that year.

If Maryland did a better job of turning registered voters into actual voters it would probably find itself higher in our study. Maryland had the 3rd highest level of registered voters in 2014, with 72% of citizens registered to vote but only 48% of citizens actually went to the polls. Like Washington and Oregon, Maryland tends to go for Democrats and FiveThirtyEight gives Hillary Clinton a 99.8% chance of winning the state this year.

Washington shares more than just a border with Oregon – it also shares its political engagement temperament. Overall its voters are mostly engaged but it does not get as big as a boost in turnout during presidential election years as other states do. The fact that the Evergreen State tends to be solidly Democrat may explain the somewhat lackluster turnout during presidential elections, there’s simply not as much at stake compared to states like Colorado.

Minnesotans are rabid voters who tend to keep their money in their wallets. According to our data, Minnesota ranked no lower than 6th in voter turnout in 2010, 2012 and 2014 but ranked no higher than 30th for donations in 2008 and 2012. Minnesota is one of the tighter races during this election, according to FiveThirtyEight. The site gives Clinton a 81.6% chance to take the 10 electoral votes in the state.

Vermont Sen. Bernie Sanders gave Hillary Clinton her biggest test for the Democratic Party nomination. But voter turnout in the Green Mountain State is trending down. In 2010, Vermont had the 5th highest voter turnout at 55%. That number fell to 42.5% in 2014. The state still managed to rank in our top 10 thanks to high donations per capita relative to income.

While close geographically, Vermont and New Hampshire share little in terms of political engagement. Vermont tends to have lower turnout with high relative donations while New Hampshire has the opposite. In 2012, New Hampshire’s voter turnout was 69.4% – tying it with Iowa for the sixth highest in the country. But in terms of donations, New Hampshire only ranked 19th that year. The state also tends to be more unpredictable in terms of presidential elections. FiveThirtyEight gives Trump a 25.8% chance to win there, which makes it an important state to watch come November.

Connecticut appears to be made up of some of the most giving citizenry in the country judging by campaign donations. The Constitution State ranked in the top 5 for donations in both years we analyzed the data. Unfortunately when it comes to actually showing up at the polls, the state is lagging. In 2010 and 2014 – the two non-presidential voting years we analyzed – Connecticut did not even crack 50% voter turnout.

Moving to Connecticut? Find out what your taxes will be.

Note: The FiveThirtyEight election forecasts mentioned in this article are from October 4, 2016.