The Ten Most Politically Engaged States 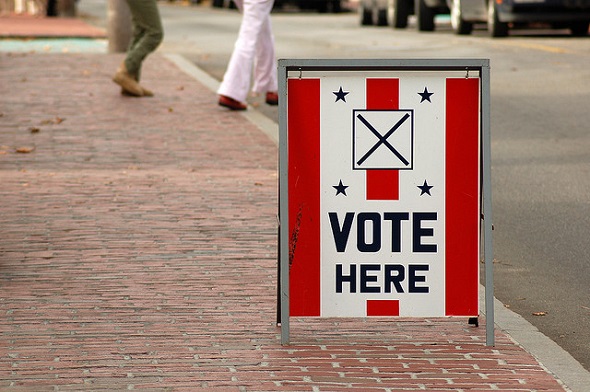 With Election Day rapidly approaching, millions of Americans are starting to get involved in the political process. For some, this means registering to vote, doing some research and hitting the ballot box on November 4th. For others, election season calls for a little more action: donating money to favorite candidates and volunteering at a campaign office are a few ways some choose to exercise their political rights. Of course, many Americans go the opposite route: in 2012, more than 35% of voting-eligible citizens didn’t fill out a ballot.

Given the variety of ways to get involved in the political process, and the differing attitudes toward politics in general, it is no surprise that political engagement varies widely among cities and regions. We wanted to find out which states’ citizens are the most involved, and which appear to be the most apathetic.

To determine the level of political engagement in each state, we used a holistic approach that considered four separate factors:

The index, on a 100-point scale, was calculated based on each state’s ranking in each of the four factors. A first place ranking was worth 25 points; a second place, 24.5; a third place ranking, 24; all the way down to 0.5 points for a 50th place ranking. We’ve included the full 50-state index at the bottom of the page. 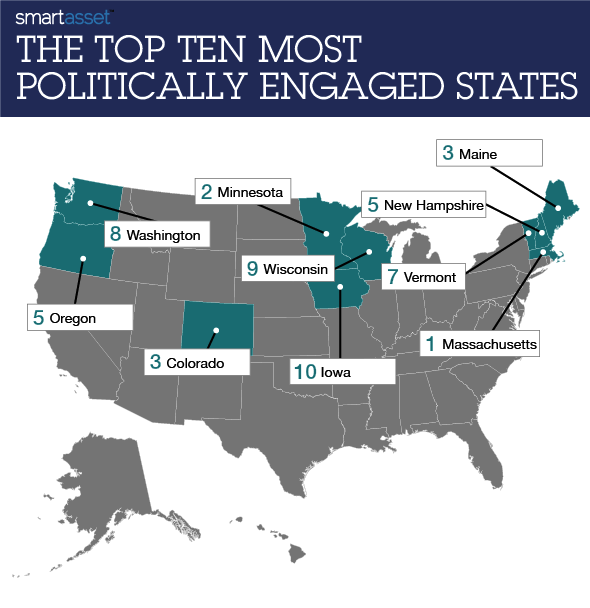 Massachusetts has been in the national spotlight over the past few years for several reasons. In 2012, it was the home state of the Republican presidential candidate, former Governor Mitt Romney. As a longtime Democratic stronghold, however, the state’s citizens voted overwhelmingly in favor of President Obama. The next year, after the President won re-election, Massachusetts again took center stage, when Governor Romney’s signature health plan was used as a model for the Affordable Care Act. With all this attention, it’s no surprise that Bay-Staters have especially engaged in the political process in recent years. In 2012, Massachusetts had the second highest per-capita donation rate of any state, and the fourth highest voter turnout.

While Minnesotans aren’t particularly big political donors—they ranked 25th in per capita donations to the 2012 presidential campaign, with $1.90 donated per person—they get involved the traditional way: by voting. Between the 2010 and 2012 elections, they had the highest average turnout, narrowly beating their Midwestern neighbor, Wisconsin. In fact using a different method to calculate voter turnout, a professor at George Mason University found that Minnesota ranked first for turnout in each of the past two elections. (That data is available at electionproject.org.)

Planning for retirement? Find how much you should be saving.

While it would be tempting to pin Colorado’s high level of political engagement over the past several years on activity surrounding the marijuana referendum that passed in 2012, the numbers indicate that, even without a disputatious referendum to energize voters, Colorado remains one of the most engaged states in the country. In 2010, the Rocky Mountain state saw the ninth highest voter turnout, and per capita donations to the 2012 presidential campaign (wholly unrelated to legalizing marijuana) were 9th highest overall. That being said, the vote for pot probably didn’t hurt: in 2012, 70.4% of Coloradans cast a ballot.

With four states in the top ten, New England easily ranks as the most politically engaged region in the U.S., but while the other three Northeast states ranked highly for their level of per capita donations, Maine cracked the top five on the strength of its high voter turnout in both 2010 and 2012. Most impressively, Maine ranked first for turnout in the 2010 election, with 59.4% of voting-eligible citizens casting a ballot—a higher turnout than many states had during the presidential election two years later.

Residents of the Granite State have a reputation for political unorthodoxy. Though their New England neighbors vote overwhelmingly in favor of Democrats in national elections, New Hampshire is often considered a swing state, and until very recently supported conservatives just as often as liberals. The New Hampshire presidential primary also plays a key role in national elections, as it is the first primary to occur during each election cycle.

Typically, in presidential elections, uncompetitive states like Oregon have relatively low voter turnout. The logic is simple: when all the predictions are for one candidate to win the state with ease, some voters don’t see the point in casting a vote. Not so in Oregon. Though it hasn’t gone in favor of a Republican candidate since the ’80s, in 2012 it had the 10th highest overall voter turnout, with over 67% of eligible voters casting a ballot. Although lower in absolute terms, Oregon’s 2010 turnout was comparatively even better: fourth highest overall.

Unlike their neighbors in the Granite State, Vermonters are pretty predictable voters, as a whole. In each of the past two presidential elections, more than two-thirds of ballots cast have gone to the Democratic candidate. Vermont had the 8th highest level of per capita political donations of any state in the union, with each person donating an average of $3.24.

With two high profile ballot initiatives being decided in 2012—one to legalize same-sex marriage, the other to legalize recreational marijuana—it would be reasonable to expect Washington to rank most highly for 2012 turnout and registration. In fact, the opposite is true. Though ranked only 16th for voter turnout in 2012, Washington’s 2010 turnout of 58.1% ranked second out of all 50 states.

One of several states in the upper Midwest to place in the top ten, Wisconsin regularly has one of the highest voter turnout rates of any state in the country. With over 73% of eligible voters casting ballots in 2012, Wisconsin was second overall that year. Though Wisconsin, like Minnesota, historically has preferred its politics to be polite, the past four years have seen debates over several issues rise to heated levels. Most notably, current Governor Scott Walker faced a recall election in 2011—a rarity in any state, but even more so in Wisconsin.

Though New Hampshire holds the first presidential primary every four years, Iowa selects its presidential candidates first, through a caucus system. The Iowa Caucuses therefore play an important role in presidential elections, as they can set the tone for the entire primary. Recognizing this, presidential candidates give lots of attention to the Hawkeye State, often meeting thousands of Iowans in person, hoping to make an impression. In return, Iowans cast their presidential ballots in large numbers. In 2012, Iowa had the 6th highest voter turnout, with 69% of eligible voters casting ballots.

1. Data on voter turnout and registration came from the U.S. Census Bureau. Data on campaign donations came from the Center for Responsive Politics, and is available at opensecrets.org.