The Best States for Veterans

But veterans may find it easier to transition to civilian life in some states than in others. Some states may have more welcoming environments for veterans in terms of a robust local veteran presence, existing Veterans Affairs support structures and better economic prospects. SmartAsset took a look at which states are the best for veterans.

In order to come up with our ranking, we looked at data for all 50 states across seven metrics. We considered the percentage of the population who are veterans, the unemployment rate for veterans, veterans’ median income after housing as well as the percentage of veterans whose income would place them under the poverty threshold. We also looked at the veteran business ownership rate, the number of Veterans Affairs facilities per 10,000 veterans and the percentage of veterans who are enrolled in the Veterans Health Administration. Read more about how we created our ranking in the Data and Methodology section below. 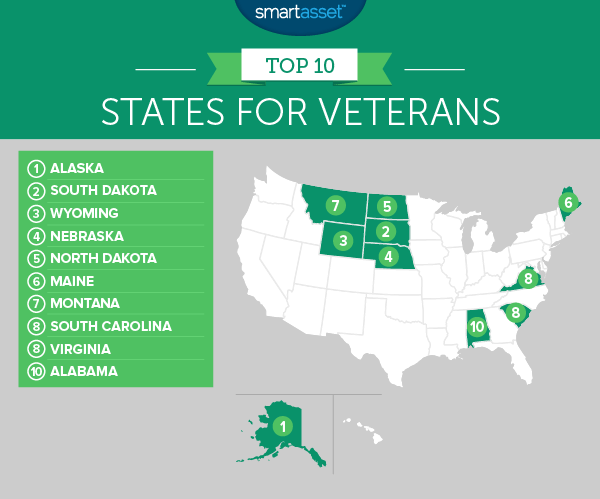 The Last Frontier is the best state for veterans, according to our data. There are nine military bases in Alaska, which is one reason for the large number of veterans in the state. Alaska veterans are also doing well economically speaking. Veterans there have a median income of $81,330. Plus, according to 2020 data from the Bureau of Labor Statistics, only 4% of veterans were unemployed in Alaska, which is better than the overall state unemployment rate of 5.4% in February 2022.

Not only is South Dakota a great state for homeowners, it’s also the second best state for veterans. South Dakota does a good job at supporting its veterans. It has the highest rate of veterans enrolled in the Veterans Health Administration in the country (almost 70%), as well as the second-most veteran facilities per 10,000 vets.

Wyoming claims the third spot in our ranking of the best places for veterans. Like South Dakota, Wyoming offers veterans one of the strongest support networks in the country. Wyoming has 4.23 VA facilities per 10,000 vets (the most in the country) and the sixth-highest percentage of veterans enrolled in the VHA (58.7%). Veteran unemployment in the state was 6.5%, according to the BLS. That contrasts with the state’s overalll unemployment rate of 3.7% in February 2022.

Check out our refinance calculator.

North Dakota has the lowest percentage of veterans in our top 10. Only 8.2% of the state’s population are vets. But veterans there are doing quite well financially. North Dakota vets take home a median annual income of $45,810. After taking out housing costs, those veterans are left with $36,543 on average – the third highest income in the country. The downside, however, was that veterans in the state had an 8.4% unemployment rate while the state’s overall unemployment rate was 2.9%.

One statistic that Maine can be proud of is that 10.5% of all private businesses in the state are owned by veterans. Maine, which had an overall jobless rate of 4% in February 2022, also boasts a high percentage of veterans enrolled in the VHA (53.6%). However, other metrics indicate areas for improvement. Veteran unemployment in the Pine Tree State was 5.2% and around 7% fall under the poverty line.

Veterans in Montana may find a built-in support system. More than 10% of the population are veterans. These veterans also receive a fair amount of support compared to other states. Almost 60% are enrolled in the VHA and there are 2.83 veterans facilities for every 10,000 vets. Unemployment in Montana was running at 2.6%, but the jobless rate for veterans in the state was 4.4%.

Related Article: 15 Things to Know Before Moving to Montana

South Carolina has a strong veteran presence in both the general population as well as the business sector. Veterans account for 9.9% of the population and own 10.5% of private businesses. Another plus is the relatively low cost of living in South Carolina, which leaves veterans with $27,720 on average to spend after paying for housing. Veteran unemployment was 5.7%; statewide it was 3.5%.

Virginia, home to the Department of Defense, tied with South Carolina as the highest-rated Southern states in our study. Our research indicates that only 4.7% of veterans in Virginia are living below the poverty line and 4% were unemployed. Statewide joblessness was 3.2%. And veterans there have the second-highest median income after housing costs in the country (after Alaska). Virginia veterans have almost $37,000 on average left over after paying for housing.

Alabama cracks our top 10 because it has the highest veteran business ownership rate in the country. More than 11.2% of businesses in the Yellowhammer State are veteran-owned. The state’s veterans also have a relatively high income after housing – $29,025 on average. Unemployment among the state’s veterans was 6.3%. Overall joblessness in Alabama was 3%.

To find the best states for veterans, SmartAsset gathered data for all 50 states in the following seven metrics:

Questions about our study? Contact us at press@smartasset.com.
Photo credit: ©iStock.com/wavebreakmedia