The Best Ski Towns to Live in 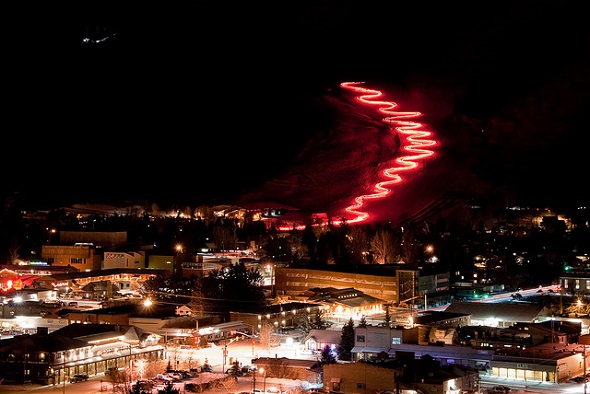 Over the past three decades, skiing and snowboarding in the United States have grown from niche hobbies pursued by a relatively small collection of enthusiasts into major industries. During the 2013-2014 winter season alone, the National Ski Areas Association recorded over 56 million skier and snowboarder visits to U.S. ski areas. That’s 56 million separate times Americans spent a day at a U.S. ski resort, and it places downhill skiing and snowboarding among the largest economic engines in the outdoor recreation sector.

Much of that economic activity occurs in the relatively small towns that sit adjacent to America’s ski areas. For anyone who works in the winter-sports industry, whether as a ski instructor, a lift-operator, a retailer or even a friendly slope-side bartender, living in one of these lovely locales is a must. We collected data on 92 ski towns across America, from Vermont’s Green Mountains to the Cascades of the Pacific Northwest, to find the areas that offer the highest quality of life.

There are several hundred ski areas in America. Many of these are located in or directly next to a ski town, but some are not. In cases where there was no town immediately adjacent to a ski area, we included towns within a 50 mile radius of that area. Furthermore, we limited our analysis to areas with at least 5,000 residents.1

That left us with a collection of 92 ski towns, and for each one we gathered data on a variety of economic and social indicators. Specifically, we considered the following five factors.2

To create our index, we ranked each town across all five of the above factors. We then combined the violent crime rankings with the property crime rankings to produce a single, overarching crime rating. Finally, we combined the single crime rating with the remaining three rankings for unemployment, discretionary income, and dining and entertainment, to produce a single score on a scale of 0 to 100. The city with the highest average ranking received a perfect 100, while the city with the lowest average ranking received a zero. 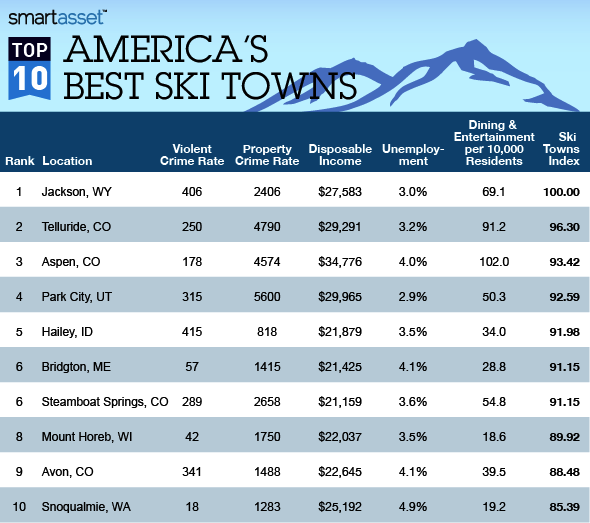 For skiers and snowboarders, Wyoming’s Jackson Hole needs no introduction. It is one of the nation’s premier destinations for winter sports, and the Jackson Hole Ski Resort offers some of the best skiing not only in the country but in the world. In fact, in light of the surroundings, the town of Jackson is sometimes overlooked. It shouldn’t be.

Of the 92 cities we considered, Jackson had the sixth highest disposable income, and the seventh highest concentration of dining and entertainment establishments. Unlike many ski town economies, commercial activity in Jackson does not wane in the summer. Thanks in part to its proximity to Grand Teton National Park and Yellowstone National Park, tourism is a year round industry in Jackson, which means employment is reliable, even in the summer. As of August 2014, the unemployment rate in Jackson was just 3.0%, the second lowest rate of any city in our study.

Want to buy a house in Jackson? Find out what you can afford.

Telluride originally sprang up as a mining town in the late 1800s, but over the course of the next century, as the area’s mines were decommissioned, its identity gradually shifted. The first ski lift was constructed in 1972, and development proceeded steadily over the next three decades. During that time, the town gained a reputation not only for its great skiing, but also for its vibrant culture.

Today, Telluride is flourishing. Of the towns in our analysis, it had the third highest disposable income, the fourth highest concentration of dining and entertainment establishments, and the sixth lowest unemployment rate. During the summer, the town hosts a series of major festivals and concerts, including the Telluride Bluegrass Festival and the Ride Festival, a rock festival entering its fourth year.

The quintessential ski town, Aspen has earned recognition over the years as a great place to live. Our analysis confirms that assessment. Of the 92 towns in our study, Aspen had the second highest disposable income and the third highest concentration of dining and entertainment establishments, with over 100 such venues for every 10,000 residents. Along with the world famous Aspen Snowmass ski resort, the town is home to several major academic and cultural institutions, including the Aspen Institute, a nonpartisan think tank, and the Aspen Music Festival and School, an eight week gathering of classical music students and professionals.

With three major ski resorts nearby and several others within an hour’s drive, Park City is something of a winter sports capital. Major winter sports companies such as Rossignol and Skullcandy have their headquarters in town, which means there are plenty of jobs even when the slopes are dry. The region’s unemployment rate of 2.9% (as of August 2014) was the lowest of any city in our study. With over 20,000 residents in the greater Park City area, it is also the largest town to make the top ten.

Located in the Sun Valley region of Idaho, Hailey is the largest of several towns near the world-famous Sun Valley ski resort. The area is a year-round draw for outdoor enthusiasts, with the surrounding Sawtooth National Forest offering superb hiking and fishing throughout the summer. Hailey had the sixth lowest property crime rate and ninth lowest unemployment rate of any town in our study.

The top east coast ski town in our study, Bridgton sits at the southern tip of Highland Lake, about 15 miles east of the New Hampshire border. It rated as one of the safest cities in our study, with a violent crime rate of 57.38, ninth lowest of the ski towns we examined, and well below the national average. In fact, Bridgton was the only town in our study to rate in the top 30 for each of the five categories we considered. And, though Bridgton’s Shawnee Peak may not have the name recognition of some of the larger western resorts on this list, living near the slopes is more affordable than in any other town in the top ten: average rent for a two bedroom apartment in Bridgton is just $927 a month.

Though the eponymous spring in Steamboat long ago stopped flowing, the town itself remains one of the liveliest places in the country. “Ski Town USA” had the ninth highest concentration of dining and entertainment establishments of any town we considered, including over 50 full-service restaurants. Though some may identify Steamboat with its American West heritage, today the culinary offerings and nightlife are as much a draw as the dude ranches outside of town.

Don’t be dismayed by Mount Horeb’s nickname—The Troll Capital of the World—it is actually a great place to live, and the top Midwestern ski town in America (although, given the regional topography, competition in that arena was somewhat limited). It had the fifth lowest violent crime rate and the ninth lowest unemployment rate of any town we examined.  With area rents for two bedroom apartments averaging just over $950 per month, Mount Horeb is also more affordable than other top ski towns.

Avon offers access to two of Colorado’s premier ski resorts, Beaver Creek and Vail, and a high quality of life for those who make it their full time home. The largest town in Colorado’s Eagle River Valley, Avon boasted the 10th highest disposable income of any town we examined, with per capita income of $38,665, and rent for the average two bedroom apartment costing $1,335 a month. Along with the aforementioned ski resorts, it is home to Liberty Skis Corporation, one of the largest independent ski makers in the country.

Twenty-five miles down I-90 from The Summit at Snoqualmie ski area, Snoqualmie, Washington may be the only town on this list in which snow is a rarity. Even when blizzard conditions are in effect at the Summit, it is often cool and rainy in Snoqualmie the town (which sits at a significantly lower altitude than the ski area). For those who want a high quality of life near great skiing, however, the Snoqualmie Valley may be the perfect choice. Snoqualmie enjoys the lowest violent crime rate of any town we examined, and the sixth highest disposable income.

Check out the 2015 version of SmartAsset’s study of America’s Best Ski Towns here.

1. Data on towns with populations below 5,000 people is very limited. It is also difficult to compare a town of a few hundred people with a town of a few thousand. For example: in a town of 500 people there may be one restaurant and one bar; that would still place the concentration of dining and entertainment establishments at 40 per 10,000 residents, which would have been 14th highest on our list.