Salary Needed to Afford Home Payments in the 15 Largest Cities 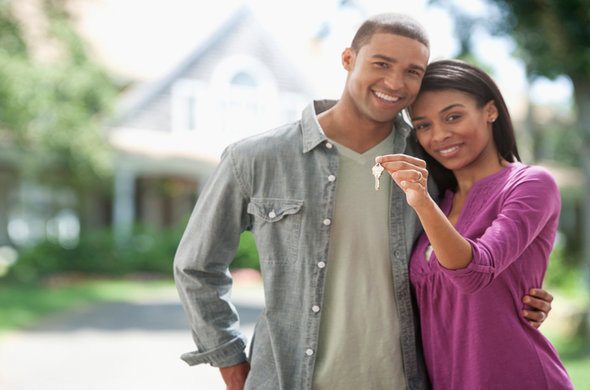 You finally have enough savings for a down payment and you’re ready to buy a house. How much will monthly house payments cost? Like with any big financial commitment, it’s important to know how much you’ll need to budget per month. It can be hard to calculate exact payments as property taxes and homeowners insurance are also factors. We crunched the numbers to find how much median home payments cost in the 15 largest U.S. cities and the salary needed to pay them.

In order to estimate the salary needed to afford home payments in the largest 15 cities in the country, we gathered data from the U.S. Census Bureau and ran the numbers through SmartAsset’s mortgage calculator.

We started with the median home value in each city and calculated how much a 20% down payment would cost. Then we plugged that data into our mortgage calculator. We assumed that each prospective home buyer would get a 30-year mortgage with a 4% interest rate for 80% of the home value (the balance after paying a 20% down payment). We also assumed an annual home value increase of 2%, annual inflation of 2% and that buyers would have annual homeowners insurance of 0.5%. For the purpose of this study, we assumed prospective home buyers had no additional debt.

We then added up the total monthly payments on the mortgage, real estate taxes and homeowners insurance. Our calculator then recommends a minimum income needed to make these payments. We ranked each city from to highest minimum income to lowest minimum income. Median home values and median household incomes are from the U.S. Census Bureau’s 2015 5-Year American Community Survey. 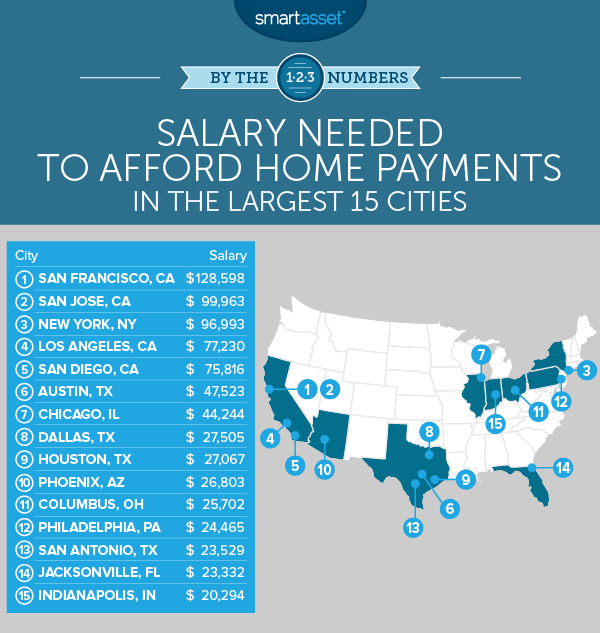 As mentioned earlier, buying a home in San Francisco really is as expensive as it’s made out to be. Although San Francisco is home to some of the most well-paid individuals in the country, the median home is still largely out of reach for the typical household. Our mortgage calculator estimates that the total monthly payments on the median-value home in SF will set you back around $3,858 per month. The mortgage payments alone hit the $3,000 per month mark. To afford this, you’ll need to earn a salary around $128,600, and the average household in San Francisco makes around $81,000.

Related Article: Years of Work Needed to Afford a Down Payment in 15 Big Cities

Just down the road from San Francisco is San Jose, where residents need to earn just under six figures to afford payments on the average home. The median home in San Jose is valued at $609,500, meaning after a 20% down payment the mortgage balance is $487,600. That will cost homeowners about $3,000 per month. To afford that, our calculator recommends an annual salary of $99,963.

The median home value in New York is just shy of $500,000. After paying a 20% down payment, homeowners will have to make monthly home payments of $2,910 to live there. Our calculator recommends you make at least $96,993 if you are planning on buying the median-value house. Despite New York and San Jose having similar monthly payments, home values are 20% higher in San Jose. So why can homeowners expect to pay about the same amount per month? The answer is high New York real estate taxes. New Yorkers pay double what San Jose residents do in real estate taxes.

It’s tough for the average Los Angeles resident to afford the average LA home. The typical Los Angeles household makes about $50,000 per year but to afford the monthly home payments on the median house our mortgage calculator recommends earnings of about $77,000. Like other California cities, most of the cost of owning a home in Los Angeles is tied up in the mortgage payments. Prospective LA homeowners can expect to pay $2,317 per month on average. Of that, $1,800 will go toward paying off the mortgage itself.

Of all the California cities on our list, San Diego is the most affordable for home buyers. Home payments in San Diego will run up a monthly bill of $2,274 on average. To cover this, our mortgage calculator recommends earnings of about $75,816 per year.

The Texas capital is home to some of the highest property taxes in our study. The real estate taxes on a home worth $240,000 in Austin will be higher than the real estate taxes on a $471,000 home in Los Angeles. But the relatively low home values make Austin more affordable than big California cities. Monthly payments on the average home in Austin will be about $1,426.

The median home value is Chicago is just under $223,000, according to the U.S. Census Bureau. In order to afford the monthly payments of $1,327 on the average home in Chicago, our calculator estimates that you will need to make at least $44,244 per year. That figure is actually lower than Chicago’s median household salary of $48,522.

Data from the Census Bureau suggests that homes in Dallas are on the affordable side. The median home value in Dallas is $135,400. After putting 20% down on that home, a mortgage balance of $108,320 is left. Dallas residents will need to earn a salary of $27,505 on average to afford monthly home payments of $825.

Prospective home buyers in the Space City would only need to earn $27,067 per year on average to afford the monthly payments on the median-value house. Our mortgage calculator estimates that those payments will be about $812 per month. The average Houston household earns $46,000 per year, meaning it might not be too much of a reach to afford a more expensive home.

Real estate in the desert can be very affordable. The median Phoenix home is valued around $163,000. To pay the monthly costs on that home (after putting down 20%), you will need to earn just under $27,000 on average. It’s worth noting that our calculator does not take energy costs into account so if you are buying in Phoenix, watch your electricity usage. The average high temperature in July is a sweaty 104 degrees!

The Arch City is an affordable option for potential home buyers. Columbus has the third-lowest median home value in our study. Only San Antonio and Indianapolis have lower median values. Monthly payments on a $129,100 home in Columbus will be $771, according to estimates from our mortgage calculator. That monthly cost is within reach for many Columbus households, who make an average of $45,000 per year.

Homes in Philly are even more affordable than they are in Columbus. We estimate that a household earning $24,465 should have enough to make monthly payments of $734. That’s the cost of monthly home payments on a median value home in Philadelphia. Before everyone moves en masse to the City of Brotherly Love, keep in mind you’ll need to have $27,000 saved on average to afford a 20% down payment.

San Antonio has seen some impressive growth in recent years. The population went from 1,327,000 in 2010 to 1,469,000 in 2015. Despite the population growth, homes are still affordable in San Antonio. After a 20% down payment, owning a home would cost about $706 per month on average. Our calculator recommends an annual salary of $23,529 to afford those payments. Like other Texas cities, the real estate taxes in San Antonio are pretty high. Around $210 of the $706 monthly payment goes toward real estate taxes.

Florida is known as an affordable place to live and Jacksonville is no exception. The median home value is $136,400. That mortgage balance, after a 20% down payment, is $109,120. According to our mortgage calculator, homeowners need to make around $23,332 annually to pay that off.

On average, Indianapolis has the most affordable homes of the largest 15 cities in America. Monthly payments on the median-value house will come to around $609. If you’re earning a salary of $20,294 per year, you should be able to afford the monthly payments. Of course saving up to afford a 20% down payment may take some time. 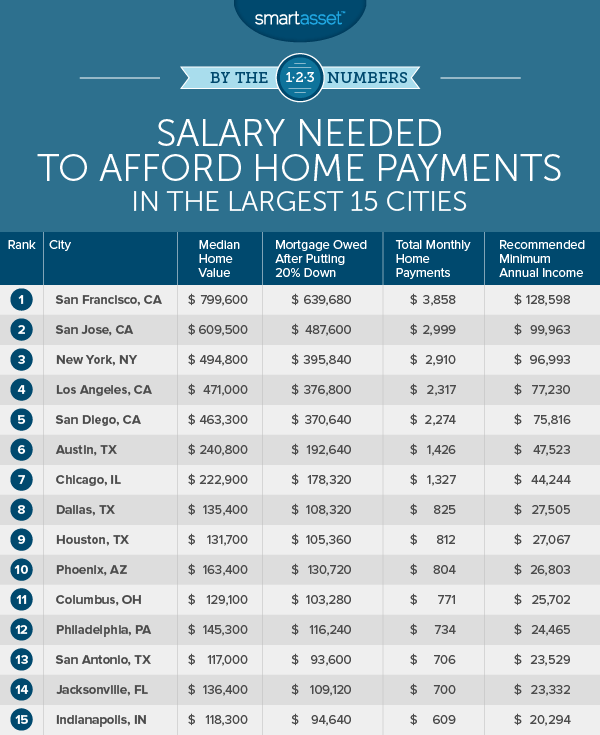