Occupations With the Largest and Smallest Pay Gap 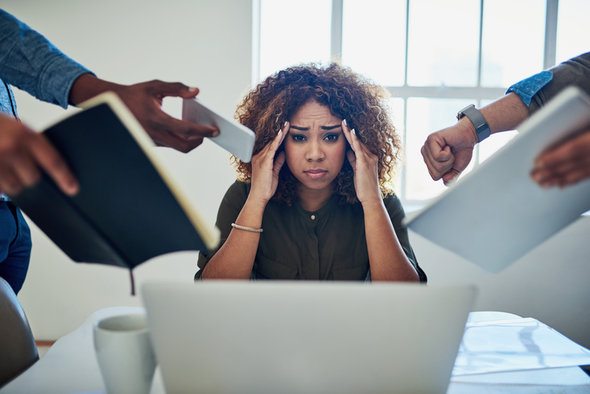 Taking a new job in a new city? Check out mortgage rates.

In order to find the occupations with the largest pay gaps, SmartAsset analyzed data on earnings for men and women across different occupations. Check out our data and methodology below to see where we got our data and how we analyzed it.

Occupations With the Largest Pay Gap 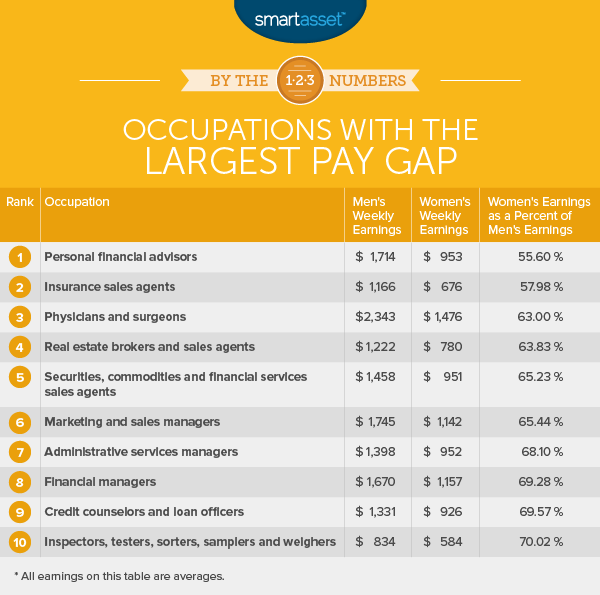 Securities, commodities and financial services sales agents make, on average, $1,351 per week. However, men make more than that number on average, while women earn significantly less. On average, women take home around $951 per week and men earn $1,450.

This is a male-dominated field. A financial services sales agent is more than twice as likely to be a man than a woman.

This is one of the most popular occupation in our top 10. Overall there are about 920,000 marketing and sales managers in the country. Both men and women in this job are well-compensated.

Administrative service managers are the people who plan and coordinate supportive services for an organization. Typically, men are better compensated for this type of work than women. The average woman in this occupation makes about $952 per week, while the average man makes just shy of $1,400 per week.

Financial managers are the people who plan for the long-term financial viability of their company. There are over 1 million people doing this across the U.S., with women slightly outnumbering men.

However, while women may be more likely to do the job, they tend to be paid less. The average male financial manager earns $1,670 per week compared to $1,157 for women. This means women in this occupation get paid 69.28% of what men get paid.

Credit counselors and loan officers determine whether or not consumers and businesses are able to get loans. Once again this is an occupation with larger numbers of women working in it than men. Women credit counselors earn an average of $926 per week and men earn $1,331 per week. This means the average woman in this occupation earns only 69% of what the average man does.

Occupations With the Smallest Pay Gap 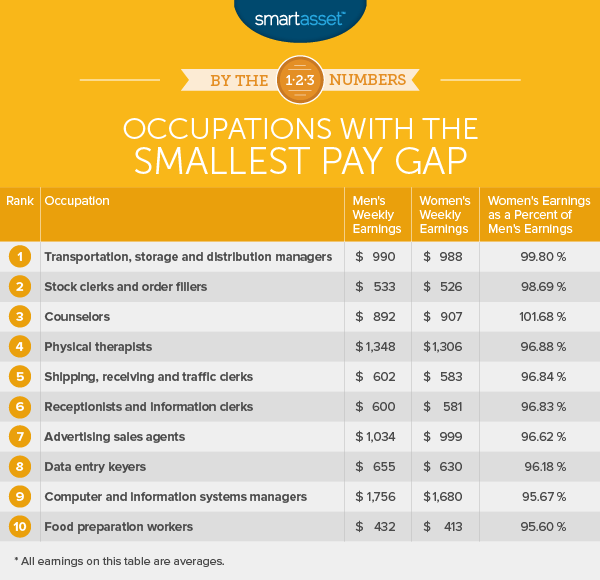 This is the occupation with the smallest difference between men’s and women’s average earnings in our data set. Women working as transportation, storage and distribution managers earn 99.8% of what men do, on average. Both groups make just under $1,000 per week.

Men are more likely to be transportation, storage and distribution managers. There are about 237,000 men in this occupation compared to 51,000 women.

For the three other professions where women earn more on average than their male counterparts, see the section below this one.

However, this is a relatively uncommon job to have. There are only about 200,000 physical therapists in the country and about 128,000 are women.

People in this occupation are tasked with maintaining an accurate record of incoming and outgoing shipments. The job includes packing and unpacking of shipments. In general, this is not a high-paying job, but on average men earn slightly more than women do.

On average, women are paid about $583 per week, which is 96% of what men earn. Despite being paid similar amounts, workers in this occupation may find it hard to afford housing, or save for retirement.

While a difference of $20 per week may not sound like a lot, it equals about $1,300 per year. Or about two full weeks of average pay for data entry keyers. Women are over three times as likely to work in this profession than men are.

Computer and information systems managers, or IT managers as they are better known, tend to be paid well. On average both men and women earn over $1,650 per week. Men, however, earn slightly more than women. The average male in this field earns $1,756 per week while the average female earns $1,680 per week.

This means when it comes to managing computer and information systems, women earn about 95.6% of what men earn.

Women are also twice as likely to be sewing machine operators as compared to men.

If you come across a teaching assistant, odds are she’s a woman. Woman are almost 10 times more likely to work in this role than men.

In order to find the occupations with the largest and smallest pay gaps, we looked at data on 120 detailed occupations. We analyzed data on the following two factors:

To create our rankings, we compared the weekly earnings for women in each occupation to that of men. We arranged the occupations by women’s earnings as a percent of men’s earnings.

Note: For our final rankings, we did not include occupations with the phrase “other” in them due to a lack of clarity.

Tips for Paying Off Student Debt

To get the highest-paying jobs, you typically need to have a good education. That can mean taking on a lot of student debt, which can be troublesome to pay off. Here are some tips for the best strategies to handle student debt.

Like many solutions to financial problems the first step is setting up a budget. Make student debt a priority in your budget so that you put money toward it. By having a budget you see clearly where there is slack in your spending. For example, if your budget shows you are spending too much on eating out, maybe cooking more will help.

Another tip is to set up automatic student loan payments. By doing this you will never make a late payment and can avoid paying those troublesome late fees. Some student loan providers will also shave a few points off your interest rate if you set up an automatic payment plan.

Finally,even though student loan debt can be stressful, it may not be a great idea to pay it off early. For one, student loan interest payments are tax-deductable. Another reason is that if you received a federal student loan and are on an income-based repayment plan, your student debt can be forgiven after 25 years. Watch out though: the amount of debt forgiven will be treated as taxable income.