The Cities with the Strongest Housing Recoveries 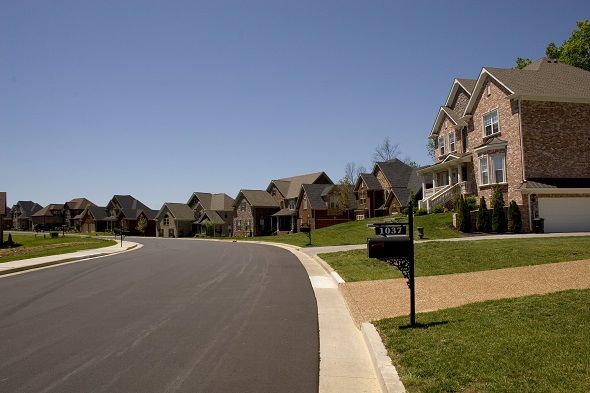 Between 2007 and 2011, 81 of America’s 100 largest urban housing markets saw prices decline at least 10%, with over half of those markets experiencing a decline of at least 20%. That, in short, is what one of the largest housing crises in U.S. history looks like: widespread, significant drops in home prices. While the overall housing market has (mostly) recovered, some places have fared better than others.

So which cities have truly bounced back? To answer that question, SmartAsset looked at data from the Federal Housing Finance Agency and the National Association of Realtors on home prices in America’s 100 largest metro areas since 2006. We wanted to find cities that: A) experienced a significant decline in home prices during the housing crisis; and B) have since recovered to or beyond their pre-crisis peak.

To find the cities that have had the strongest housing recoveries, SmartAsset first compared the pre-housing-crisis peak home price in the 100 largest housing markets in the country to each market’s low point during the crisis. We calculated the percentage decline in prices for each of these cities, and filtered out any city that did not experience a decline of at least 10%. That included places like Austin and Pittsburgh, housing markets that remained relatively healthy even during the crisis.

For the remaining 81 cities, SmartAsset compared the pre-crisis peak home price to the current average home price. We calculated the percentage growth from peak to present for each of these markets. The cities with the highest peak-to-present growth rates have experience the strongest recoveries. 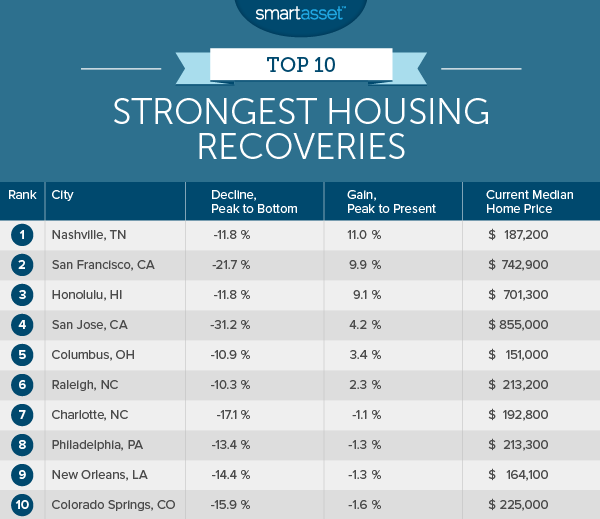 Between the third quarter of 2007 and the first quarter of 2011, home prices in the Nashville metro area fell nearly 12%. In the four years since then, prices have surged, increasing by 26% since they hit bottom and reaching a level more than 11% higher than their pre-crisis peak. Despite that, Nashville remains something of a bargain: according to the National Association of Realtors, the median home sales price in Music City is just $187,200, below the national average of $208,700.

San Francisco’s booming housing market is no secret. Thanks to the rapid expansion of the Bay Area’s tech sector, prices are skyrocketing and it has become the best place in California to get a mortgage (assuming you are able to find a house you can afford). What many people don’t realize is that just four years ago, San Francisco’s housing market was in the dumps. It bottomed out in the second quarter of 2011, when home prices fell to 21% below their pre-recession peak.

Despite its geographical isolation from the rest of the country (and the world, for that matter), Honolulu did not escape the housing crisis. After peaking in late 2007, home values fell nearly 12%. It turns out that if you could have afforded it, 2012 would have been a great time to buy a beach house in Honolulu, as home prices averaged $628,800, compared with $701,300 today.

According to the National Association of Realtors, the average home price in the San Jose metropolitan area was $855,000 as of the end of 2014. That makes it the most expensive market in the country. But as recently as 2012, the average home price was some 25% lower, at $645,000. Still beyond the budgets of most Americans, but a bargain in the home of some of the world’s wealthiest companies and people.

While much of the Midwest has struggled to recover from the housing crisis, Columbus has been an exception. Home prices in the Ohio state capital are 3.4% higher than they were at their pre-recession peak, although they remain low with respect to the rest of the country. As of the 4th quarter of 2014, the median home price in Columbus was just $151,000.

The Raleigh housing market has benefitted over the past few years from strong growth in the regional economy, bolstered by the tech sector of the North Carolina research triangle. Homebuyers in Raleigh also benefit from low closing costs, which average just 1.6% of total home value in Wake County, fourth lowest in the state, and 182nd lowest in the country (out of more than 3,300 counties).

While prices in Charlotte remain slightly below their pre-recession level, that is reflective more of the intensity of the housing bubble than the growth rate in recent years. Since bottoming out in the first quarter of 2011, prices have since grown by nearly 20%. The average home in Charlotte now sells for $192,800, compared with an average sales price of just $156,600 in 2012.

Among cities in the northeast, Philadelphia has always had one of the more affordable housing markets. For example, the median home sales price in the Philadelphia metro area in the 4th quarter of 2014 was $213,300, more than $150,000 less than in the Boston area ($383k) and the greater New York area ($455k). Philly’s prices have also climbed more quickly since the recession, gaining 14% since the end of 2011.

The 2000s were a rough decade for New Orleans. First, the city was devastated by Hurricane Katrina and then, just as it was beginning to recover, the national housing crisis began. As a whole, the city is faring better in the current decade. Since the fourth quarter of 2009, home prices have risen 15%.

After seeing prices peak in the first quarter of 2007, Colorado Springs experienced steady declines for the next five years, until the beginning of 2012. Since then, however, home prices have rebounded strongly: the current median sales price of $255,000 is more than 10% higher than it was three years ago.