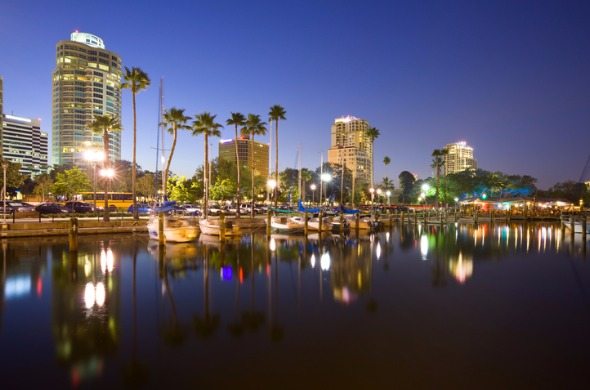 The economy is finally starting to heat up. In fact, the economy is moving so fast the Federal Reserve recently increased the interest rate in an attempt to thwart potential inflation. But this growth has not taken place everywhere. Some places are booming more than others. Below we take a look at the data to see where the economy, housing and the populations are growing the fastest to find the top 10 boomtowns.

This is the fourth annual version of this study. Check out the 2016 version here. 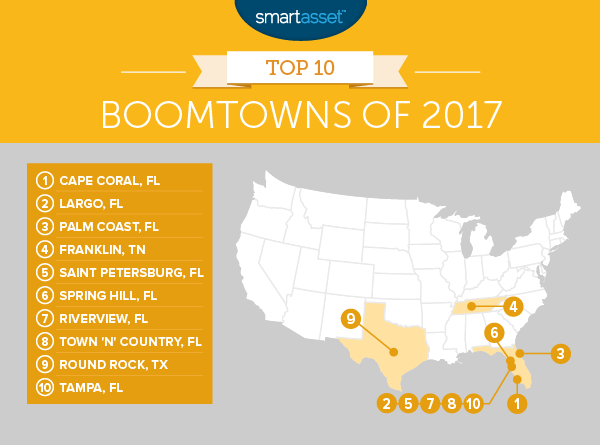 According to our data, Cape Coral is the number one boomtown. One feature of any boomtown is a large influx of new residents. Relative to its population only one city (Bend, Oregon ranked 12th) has seen a larger net migration than Cape Coral.

Overall Cape Coral has seen an influx of net migration equal to 2.9% of its population. At the same time the economy has been growing tremendously. From 2012 to 2016, the GDP of Cape Coral grew 5.2%.

Another feature of a boomtown is a productive, growing economy. That means a boomtown both attracts new residents as well as employs its current ones. Largo scores well in this study because of how productive its residents have been. According to our data, Largo has a 2017 unemployment rate of only 3.1%, down by 1.4% from 2016.

This availability of jobs has attracted a flood of new residents. This city has seen a net migration equal to 1.9% of the city’s overall population.

When you have new residents coming to a city, they need housing. This means one indicator of a boomtown is an increase in the housing supply. In just one year, from 2015 to 2016, Palm Coast saw its number of housing units jump by over 7%. That increase in housing is desperately needed in this boomtown.

From 2015 to 2016 this city saw a net migration increase equal to 2.4% of the area’s population. For that metric this city ranks seventh. The unemployment rate here also continues to drop, though it’s relatively high by the top 10’s standards. From 2016 to 2017, the unemployment rate fell by 1.7%.

From 2015 to 2016, St. Petersburg saw a large influx of residents. According to our data, new people coming to the area outnumbered the people leaving by about 1.9% of the total population. Despite that large influx St. Petersburg has not built quite as many homes, which is why it falls to fifth in this ranking. From 2015 to 2016, the housing supply in this city increased by only 4.3%.

Business in St. Petersburg is still booming, however. Over the past five years the GDP grew by 4.2%, a score which beats 90% of cities in this study. One concern for newcomers to this state might be the property taxes. Despite being known as a low-tax haven, Florida does have higher-than-average property taxes.

Riverview is another Florida city with a falling unemployment rate which is both attracting newcomers to the city but also boosting the overall economy. Overall the GDP of Riverview grew by 4.2%, a score which beats 90% of cities in this study and the unemployment rate fell by 1.5%. Only 15 cities in our study can beat that fall in unemployment.

Like any true boomtown Town ‘n’ Country has seen an influx of newcomers looking to take advantage of the growing local economy. According to our data, the unemployment rate sits at a low 3.2% as of September 2017, highlighting the availability of local jobs. That number is down 1.5% from the year before.

Newcomers may want to be wary of potentially rising home prices. Despite the large increase in new residents, this city has only seen housing stock grow by 3.5%.

Round Rock is one of only two non-Florida cities in our top 10. The highlights of this boomtown include a net migration rate of 2% relative to overall population, a housing construction boom equal to a 5.2% year-over-year growth from 2015 to 2016 and GDP growth of 4.9%.

The GDP number may be the most important as it shows how productive the overall economy is. In that metric Round Rock ranks 40th out of 581 cities.

The final city on this list is another one located in western Florida. This city has seen a large influx new residents, equal to almost 2% of the population. The unemployment rate is also low, and continues to fall, probably a large reason for why people are coming to this boomtown. Overall our data shows the economy here grew by 4.2%. 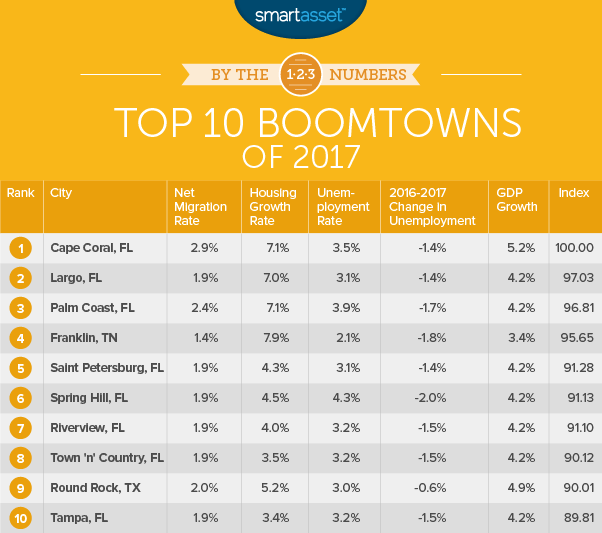 SmartAsset collected data on 581 of the largest cities in the country. We compared the cities across the following five factors:

Tips for Buying a Home in a Boomtown

It may be tempting to rush to buy as much home as you can when you see home prices appreciating. But that can be a trap. Buying more home then you can afford may leave you housing cost-burdened. Plus, in general its not a good idea to have most of your net worth tied up in one asset as it raises your exposure to risk.

A better idea, especially if you are interested in taking on risk, would be to buy a smaller home, take advantage of the booming housing market, and put the rest in the stock market. If you’re feeling risk averse putting your money into a high yield savings account is a safe option.