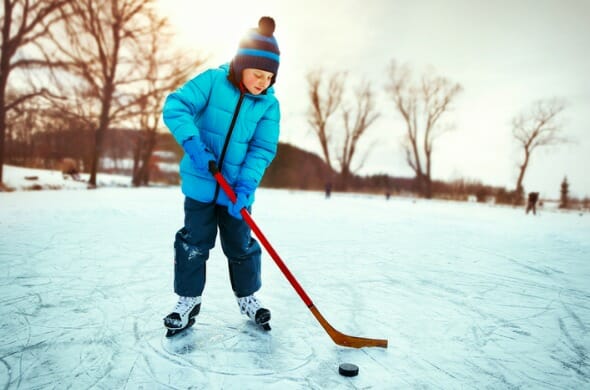 Around 4% of Americans name hockey is their favorite sport to watch, putting it in fifth place behind football, basketball, baseball and soccer. So while hockey may not be America’s favorite pastime, for those who love it, it’s a way of life.  But some places are better for fans of hockey than others. These towns combine a great on ice experience with other quality of life factors, like affordable housing costs. For the fourth consecutive year SmartAsset ranked the best hockey towns in America.

We looked at data on nine factors split between fan intensity metrics and quality of life metrics. The fan intensity metrics are attendance rate, percent of population attending games and Google trends data for the term “hockey.” The quality of life factors include unemployment rate, crime rates and dining and entertainment establishment data. Check out our data and methodology below to see where we got our data and how we put it together. 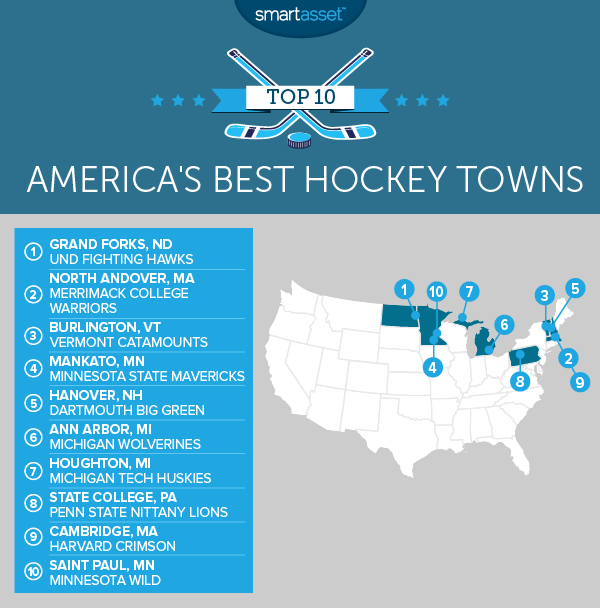 There are more indications that this town is hockey crazy than just attendance rates. For example, residents Google the term “hockey” 7% more often than they Google “food.”

North Andover takes the second spot. This is one of only three cities to score above 80 for both quality of life and fan intensity. Fans here pack into the Lawler Rink filling up 92% of seats for the average game.

Outside of hockey, this is a great city to live. It’s one of the safest cities in our study scoring in the top 10 for low rates of both violent and property crime. Plus, this city offers its residents plenty of earning potential. It has the fourth-highest median income in our study. The only problem you may have when living here is potentially keeping up with the mortgage costs. According to our data, North Andover has one of the higher housing costs in the study at $1,800 per month.

Burlington, Vermont takes third thanks to the locals’ love of the University of Vermont men’s hockey team. The Vermont Catamounts play in Gutterson Fieldhouse where the fans routinely fill out over 90% of seats. Residents of this city Google “hockey” around half as much as they Google “food,” a sign of the city’s passion for hockey.

While the fan experience in Burlington is great, the quality of life is also boast-worthy. The city has the fourth-lowest unemployment rate in our study and a top 30 score in violent crime.

Minnesota is known as a hockey state so it’s no surprise to see Mankato and the Minnesota State Mavericks once again scoring well. According to our data, just under 9.5% of the town’s population turns out for the average Mavericks game, a top 25 score. And when residents here are not watching hockey they may be thinking about it. After all, the city has the sixth-highest Google search activity for the term “hockey” in the study.

While the fan intensity scores are impressive for this town, where Hanover truly shines is in quality of life. This city has top 20 scores in median income, unemployment rate and low violent and property crime rates. One drawback is that the housing costs here, including mortgages and property taxes, can be on the pricey side.

Plus, Ann Arbor is more than just a hockey town, it’s also a great place to live. It is a relatively safe city with plenty to do. It scores in the top 25 for both low crime metrics and in the top 20 for its dining and entertainment establishment rate.

Coming in right behind Ann Arbor is another Michigan town, Houghton. This city is home to the Michigan Tech Huskies. The average Michigan Tech Huskies game is attended by over 3,000 people, an enormous figure for a town of only 8,000. According to Google data, residents search the term “hockey” about as much as they Google the term “food.”

Another plus to living here is the home affordability. According to our data, the median home costs only $730 per month, almost $430 per month less than the average home in Ann Arbor.

State College shot up from 21st last year to claim a top 10 spot in this year’s analysis. According to our data, the hockey team is supported by attendance figures surpassing the local arena’s capacity. Average attendance here is over 104% of capacity, equaling roughly 14% of the city’s population.

Other than attending Harvard Crimson games, Cambridge is a great city to live in. It has good economic conditions for those looking to work. It scores in the top 10 for both median income and unemployment rate. Cambridge also has plenty to do, taking the fourth ranking for dining and entertainment establishments per 100,000 residents.

Our list ends in the only non-college team to crack this list. The Minnesota Wild who play in St. Paul have one of the most devoted fanbases in hockey, at least judging by attendance figures. According to our data, average capacity for Minnesota Wild games is 106% of stadium capacity, equal to 6.4% of St. Paul’s total population.

Like other Minnesota towns hockey is often on the minds of St. Paul residents. Google search trends show this city searches for “hockey” 74% as often as they search for the term “food.”

To find the best hockey towns in 2018, SmartAsset pulled data for 114 cities and towns with a team in one of the following four hockey leagues: the NCAA Division I men’s hockey league, the National Hockey League, the East Coast Hockey League or the American Hockey League. Then we ranked all of the places in our study across the nine metrics that we used in the 2017 edition of our study. These factors fall into two different categories that we used to create two separate scores: a fan intensity score and a quality of life score.

After we ranked each hockey town using all nine of our factors, we averaged our rankings (giving half weight to our two crime-related factors and full weight to the other metrics) and calculated separate scores for our two categories. Then we averaged the fan intensity score and the quality of life score to create our final index.

Women’s college hockey teams were not included in our analysis, since there was not enough data available. We also excluded teams in the National Women’s Hockey League for the same reason, although we hope to include them in the future.

Tips for Affording a Home