It’s a good time to be a hockey fan in the United States. Last year saw the National Hockey League’s total attendance grow to over 22 million, an all-time high that included what was very nearly the largest crowd to ever watch a hockey game live.1 Reports are that the NHL will be adding two cities to its roster in the near future—possibly Seattle and Las Vegas. College hockey is likewise expanding, with Arizona State University adding a team of its own, bringing the total of Division I teams to 60 for the 2016-17 season.

As the introduction of new teams to such warm weather locales as Las Vegas and Phoenix indicates, hockey’s footprint is expanding. Once primarily a regional phenomenon, with the vast majority of American hockey fans residing in the Northeast and Midwest, hockey appears to have won over warm-weather hearts from California to Florida. So where is the best place to be a hockey fan today? SmartAsset crunched the numbers to find America’s Best Hockey Towns.

While the NHL is the premier hockey league in the U.S., there are several others with significant fan bases. In addition to all U.S. NHL towns, we considered every U.S. town or city with a team competing in America’s top two minor leagues (the American Hockey League (AHL) and the East Coast Hockey League (ECHL)) or in Division I NCAA hockey. That brought the total of towns in our study to 129.2 For each of those 129 towns we first looked at the overall quality of life enjoyed by residents. Specifically, to develop our Quality of Life Score we looked at the following five factors:

Along with towns that offer a high quality of life, we also wanted to find towns with a passionate base of hockey fanatics. To develop our Fan-Intensity Score we looked at two factors:

Calculate your closing costs before you buy.

For both of our two separate scores, we ranked the towns according to each factor within the two groupings, and then applied a final rating from 0-100 based on the average in each group of rankings (note: we combined the two rankings for violent and property crime into a single, overarching crime ranking). For example, the town with the lowest average ranking in the first five factors would receive a perfect 100 for Quality of Life, while the town with the highest average for the final two factors ranking (i.e. the lowest rates of attendance and hockey vs. food search traffic) would receive a zero for its Fan-Intensity Score.

Finally, to create our Hockey Towns Index, we combined the Quality of Life Score with the Fan-Intensity Score, giving equal weight to both. The results, below, are America’s Best Hockey Towns.

The University of North Dakota is one of college hockey’s true powerhouse programs. It has won 15 conference championships, made 20 Frozen Four appearances and won seven national championships, the second highest championship total behind Michigan. Add to that list of accolades some of the most faithful fans in the country and a lovely (if cold) college town setting, and you have America’s Best Hockey Town.

So just how much do folks in Grand Forks love hockey? Well, judging by their Google search traffic, they care more about hockey than they do about food. Grand Forks was one of just four cities in which residents clocked more internet searches for hockey than for food. Hockey-crazed fans should also have no trouble finding a job in Grand Forks: the city’s unemployment rate of 2.5% ranked lowest of any city in our study.

The quintessential college town, Hanover is nestled along the Connecticut River in beautiful central New Hampshire. While the main village’s population is just 8,546 (according the US Census Bureau), when the Dartmouth Big Green take the ice, there are, on average, over 2,200 fans in attendance—that’s more than 25% of the town’s population.

Find out how much house you can afford in New Hampshire.

Hanover boasts an unemployment rate of just 3%, the third lowest in our study, and both its violent crime rate and property crime rate were among the 20 lowest of any hockey town in America. It is, in short, a great place to live—and a great place to be a hockey fan.

One of several top hockey towns located in close proximity to our northern, hockey-loving neighbors, Lewiston sits along the Niagara River in upstate New York, just a slap of the puck away from Canada. Though they have only existed as a varsity-level team since 1996, the Niagara Purple Eagles hockey team has emerged as a force to contend with in college hockey, winning their conference four times since the year 2000, and making four NCAA tournament appearances over that time.

The top-rated AHL town (and the top-rated town with a professional hockey team), Glens Falls scored a 92.02 for its high quality of life. It offers the eighth highest concentration of dining and entertainment establishments of any hockey town in America, to go along with low rates of violent and property crime.

While the Adirondack Flames are a recent addition to the AHL (and, in fact, are moving to California at the end of the season), hockey has been in Glens Falls for decades. From 1979-1999, the Detroit-affiliated Adirondack Red Wings played their games at the Glens Falls civic center, followed, briefly, by the Adirondack Phantoms. In short, team owners have recognized what our study has confirmed: that Glens Falls is a great place for hockey.

For hockey fans who love winter, Houghton is the place to be. It averages over 100 days per year in which the temperature never reaches freezing, and, thanks to the proximity of Lake Superior, the town receives over 200 inches of snow annually. With that kind of weather, the only thing to do is to embrace the cold—and the sports that go with it.

Houghton ranked first in our study for the intensity of hockey fans, with average attendance to Michigan Tech games equaling nearly 50% of the town’s population, and Google search traffic for “hockey” topping 80% of traffic for “food.” Michigan Tech hockey is the main event in town, but even when the Huskies aren’t on the ice, there’s plenty to do: Houghton features the sixth highest concentration of dining and entertainment establishments for residents of any hockey town in America.

The Hershey Bears of Hershey, Pennsylvania are the oldest member of the American Hockey League, and the seventh oldest professional ice hockey team in America, behind the original six members of the NHL. They have been playing hockey in Hershey since 1938, a solid 77 years of power plays, body checks, breakaways and goals. So how much do the people of Hershey love their Bears? Attendance to Hershey Bears games averages over 65% of Hershey’s entire population, the second highest per capita attendance rate of any hockey town in America.

The northernmost town in our study, Fairbanks receives fewer than five hours of daylight during much of the winter. If lighting an outdoor rink is a challenge in Fairbanks, however, keeping one frozen shouldn’t be: average monthly temperatures for December, January and February are below zero (and in January, the average high is too). Fairbanks ranked in the top 50 of American’s 129 hockey towns in six of the seven factors we researched, including 21st overall for its level of disposable income.

The second of two places in Michigan’s U.P. to rank as one of America’s Best Hockey Towns, Marquette rated high for the intensity of fans as well as its relatively safe streets. It boasts the tenth lowest violent crime rate of any hockey town in America, to go along with the 14th lowest rate of property crimes per 100,000 residents.

The only NHL city to crack the top ten, Pittsburgh is home to some of the most dedicated NHL fans in the country. Penguins home games routinely attract over 18,000 fans, and so far this season crowds at Consol Energy Center have averaged over 100% of capacity. Combine that fan-intensity with an unemployment rate of just 4.5% (26th lowest of any hockey town) and a high concentration of dining and entertainment establishments (18 per 10,000 residents, 30th highest of any hockey town), and you have one of the best big cities for hockey fans anywhere in America.

No ranking of hockey towns would be complete without a representative from the Land of 10,000 Lakes. Duluth comes in at the number 10 slot on the strength of the region’s ridiculously high interest in the sport of hockey: Google search traffic for the term “hockey” was 24% higher than search traffic for “food.” It appears that in Duluth, residents would sooner give up food than they would hockey.

Along with the overall top 25 Best Hockey Towns, we also wanted to look at the top towns in each of America’s professional leagues, beginning with the National Hockey League. Two NHL teams cracked the overall top 25, with Pittsburgh coming in 9th overall and St. Paul, Minnesota landing the 20th overall spot. Rounding out the top five are three cities with among the most passionate NHL fanbases in the nation: Buffalo, New York; Denver, Colorado and Boston, Massachusetts. St. Paul and Buffalo both posted fan-intensity scores of 81, highest among NHL towns, and both ranked in the top 15 for “hockey” search traffic. 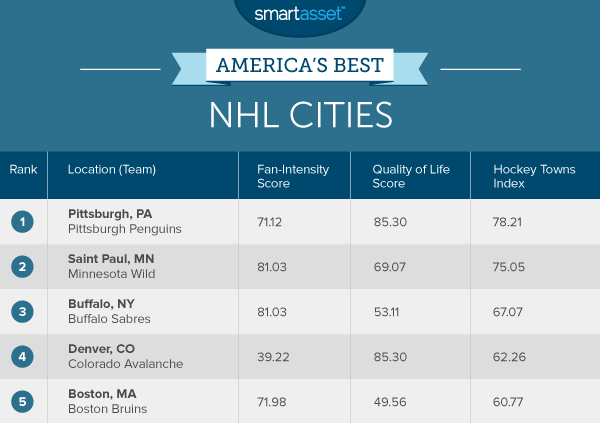 The AHL has been around for nearly 80 years, and contains 30 teams, 27 of which are in the United States. Of those 27, the vast majority are located in the Midwest or Northeast. Each AHL team has an NHL affiliate and players often migrate from one league to the other during and between seasons. Four AHL towns placed among the top 25 Hockey Towns in America, more than the NHL or ECHL. 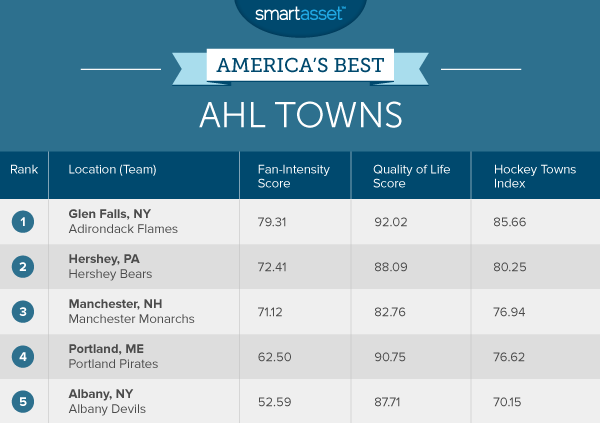 Despite its name, the East Coast Hockey League features teams from across the U.S., as far west as Stockton, California; as far north as Anchorage, Alaska; and as far south as Estero, Florida (where the Florida Everblades have already sealed up victory in this year’s competition for Best Team Name). While every ECHL team is affiliated with a corresponding NHL team, the ECHL is one tier below the AHL in the minor league hockey hierarchy. The ECHL is also a relatively young league, having been founded less than 30 years ago, in 1988. Below are the top five ECHL Towns.

Check out the 2016 version of America’s Best Hockey towns.

1. About 104,000 fans gathered in Ann Arbor Michigan to watch the Winter Classic on January 1, 2014—not quite enough to beat the previous record of 104,173, set in 2010 when the Michigan and Michigan State hockey teams met in the same stadium.

2. We did not consider any of the many Canadian hockey towns as Canadian data on crime, housing and the economy is difficult to compare to American data.