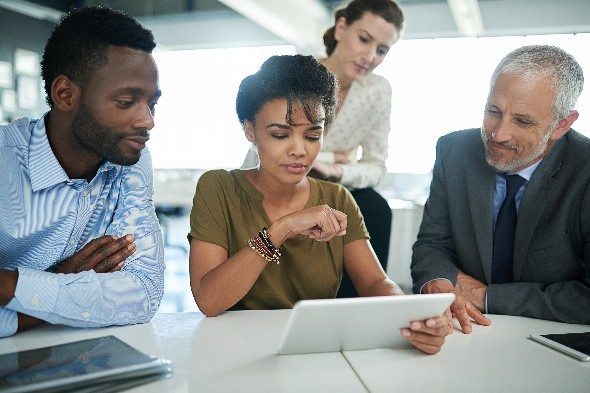 Owning your own business is a lot of work. While it can be rewarding, including financially, we were interested to see how opportunities compared for minority and non-minority business owners. SmartAsset decided to dig into the data to find out which metro areas in America are the best specifically for minority business owners. To do so, we looked at three variables – income ratio, profitability ratio and ownership ratio. See our full methodology at the end of the study. 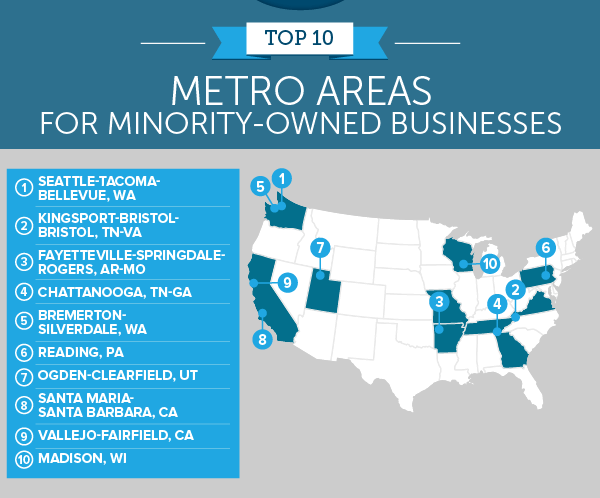 The Seattle metro area scores 1st in two out of the three criteria we looked at. It has a particularly high profitability ratio of 2.3. The area is also home to one of the largest minority-owned companies in the state, Town and Country Markets Inc., which had over $200 million in revenue in 2011.

Thinking about moving to Seattle? Check out the cost of living in Seattle.

Home of three Fortune 500 companies (Walmart, Tyson Foods and JB Hunt Transport), the Fayetteville-Springdale-Rogers metro area scored high partially because it had the second highest profitability ratio of 2.124. The metro area also has a low unemployment rate of around 4%.

Chattanooga is similar to the other metro areas so far listed in that is has a very high profitability ratio for minority-owned businesses. In this case it is 1.942. Chattanooga’s ownership ratio of .231 is also slightly better than the national average of .236.

Chattanooga has a specialized Diversity and Inclusion development program as part of its Chamber of Commerce to support minority-owned businesses.

The second metro area in Washington in our top five is even smaller than the first. With a population of 253,000, the Bremerton-Silverdale metro area barely passes the 250,000 filter. Still the metro area had the second highest income ratio on our list at 1.135. The only area with a higher score in income ratio is the Seattle metro area.

Monopoly fans will recognize this city! Even though Reading has diminished from its heyday as a railroad hub in the early 1900s, it still does well in our ranking. This is largely because of its great ownership ratio of .053.

Ogden has been a bit of a boom town since the 90s. It has seen an almost 40% increase in population since that time. Some of that growth has been with minority populations. According to the Census, people identifying as Latinos now make up around 25% of the population. Ogden does above average in all the metrics in our study. The metro area’s ownership ratio and income ratio scores stand out at .128 and .725, respectively.

The highest-scoring metro area from California, Santa Maria-Santa Barbara is known for its wine and BBQ. Our analysis shows the city is also a great place for minority-owned businesses. According to the Census data, minorities make up 26% up the population but 27% of the business owners. That gives the area one of the highest ownership ratios on our list.

Barely edged out by the Santa Maria-Santa Barbara metro area for the crown of best metro area for minority-owned businesses in California, Vallejo has a better ownership ratio than Santa Maria (.034 to .113) but falls behind because of its income ratio (.361 to .481).

The only capital city to break into the top ten, Madison does well because of consistently strong if unspectacular scores across the board. With its young population and low unemployment rate, this is not only a great place for minority-owned businesses. Madison also cracked the top ten list for our best cities for new college grads. 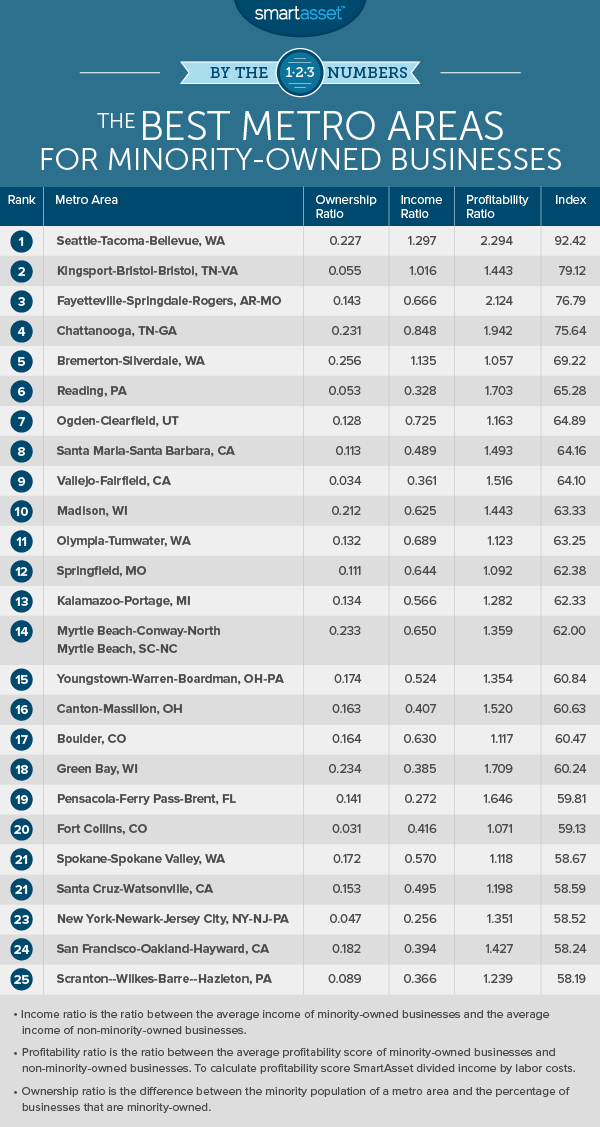