Most and Least Expensive Places to Retire – 2019 Edition 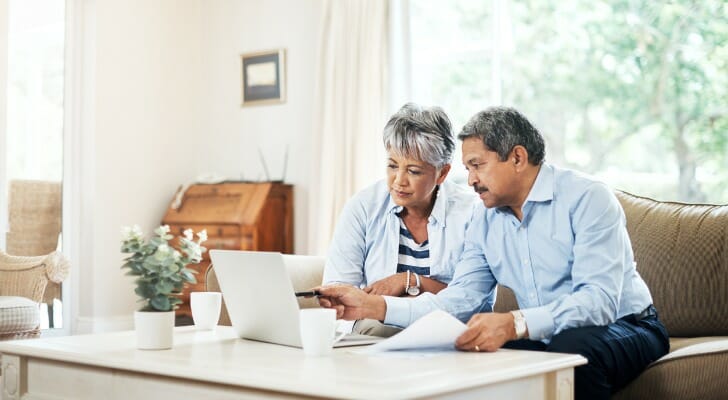 As cost of living and taxes vary throughout the U.S., location is one of the biggest factors impacting how much money you need in retirement savings. That’s why many Americans wonder whether they might want to consider relocating for their golden years. If you want to make sure you’re headed for a secure retirement, consider speaking one-on-one to a financial advisor.

In this study, we uncovered some of the cities where it is most and least expensive to retire. By adjusting national senior annual expenditures according to the cost of living and tax rates in 100 of the largest U.S. cities, we found and ranked the estimated amount you would need in savings at the point of retirement to last 30 years.

To calculate the average savings needed to retire, SmartAsset first looked at data from the Bureau of Labor Statistics (BLS) on the national average annual expenditures of seniors households. According to the 2018 Consumer Expenditure Survey, the total average annual expenditures for people 65 years and older in the U.S. is $50,860. Of that, an average of $16,940 is spent annually on housing, $6,607 on food, $6,802 on healthcare, $3,806 on utilities and $7,270 on transportation while about $9,400 goes toward other miscellaneous costs.

SmartAsset applied cost of living data from the Council for Community and Economic Research to adjust the average national senior spending for seniors in each city according to each expense category: housing, food, healthcare, utilities, transportation and miscellaneous costs. For example, in a city where housing is twice as expensive as the national average and food is half as expensive, a senior would need $33,880 for housing and $3,304 for food. Combining annual spending in each category, we generated the required post-tax income in every city to maintain the average standard of living for seniors.

Then, using SmartAsset’s retirement tax calculator, we estimated the pre-tax income required to afford that lifestyle. We assumed seniors would receive the national average in Social Security income, $19,375, and that the rest would come from savings – either a 401(k) or an IRA.

Finally, we calculated the total savings needed at the point of retirement in order to generate that level of income for 30 years. We assumed a real interest rate after inflation of 2%, reflecting the typical return on a conservative investment portfolio. We ranked cities according to that total savings figure. 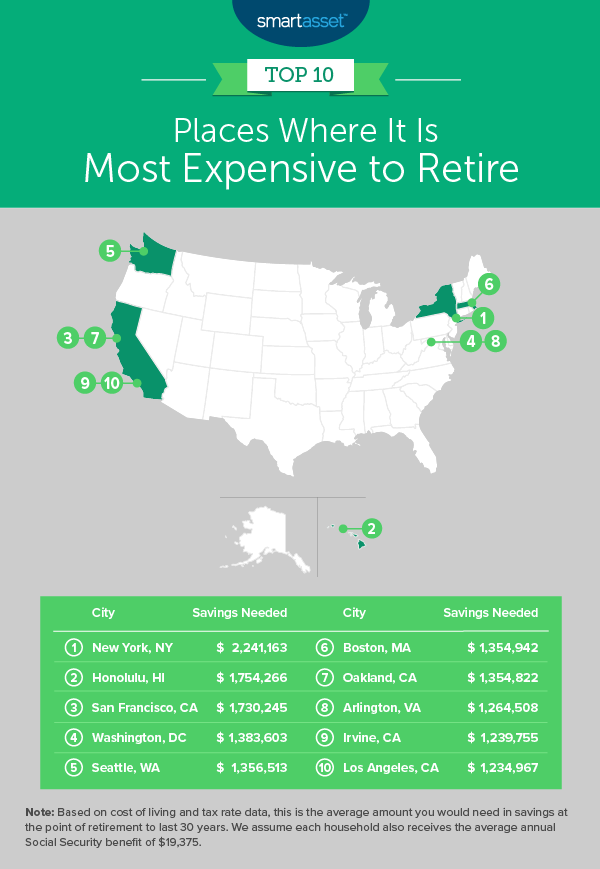 Top 5 Cities Where It Is Most Expensive to Retire

Honolulu, Hawaii is the second-most expensive place to retire in the country. In order to maintain the national average retiree’s standard of living for 30 years, we estimate that a retiree living there would need $1,754,266 in savings. Council for Community and Economic Research data shows that average housing costs in Honolulu are about twice the national average. Combined with higher food, healthcare, utilities, and transportation costs, we found that retirement in Honolulu would require more than $85,000 in post-tax income, which is almost $35,000 more than average senior spending nationally.

Like in Honolulu, housing costs in San Francisco, California are extremely high. In our study on the income needed to pay rent in the 25 largest cities in the U.S., San Francisco comes in first with the highest amount. In that study, we estimated that a household would need almost $200,000 in annual income to afford the average fair market rent for a two-bedroom apartment in the city. Similarly, housing costs contribute significantly to the cost of living for seniors in this study. We estimate that the average retiree would spend more than $87,000 annually, with about $33,000 of that going towards housing. In terms of savings, the typical retiree would need about $1.7 million in savings to last 30 years.

Using data on senior spending from the BLS’ Consumer Expenditure Survey along with cost of living data, we found that the average retiree would spend about $73,000 annually in Washington, D.C. on housing, food, healthcare, utilities, transportation and other expenses. Given a relatively high tax rate, we estimate that a non-working senior would need almost $1.4 million in savings at the point of retirement to maintain a typical senior’s standard of living over 30 years. 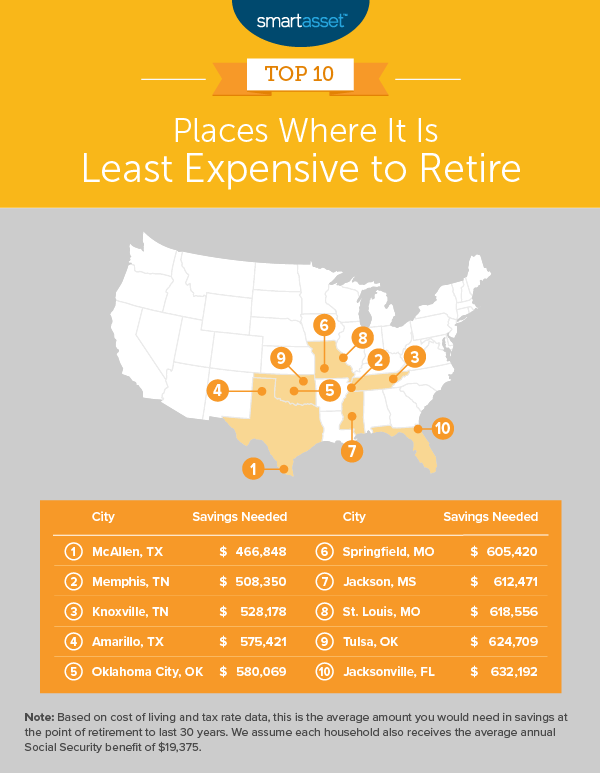 Top 5 Cities Where It Is Least Expensive to Retire

Like in our previous study, McAllen, Texas ranks as the least expensive city to retire. Because of the low cost of living and tax-friendliness of Texas for retirees, we estimate that a retiree in McAllen would need less than $470,000 in savings at the start of retirement to maintain an average standard of living for 30 years. This is almost a fifth of the cost of retirement in New York and about $360,000 less than the average amount in savings needed across all 100 cities in our study.

Amarillo is the 14th-most populous city in Texas, one of the most tax-friendly states for retirees in the U.S. There is no state income tax in Texas, meaning that Social Security retirement benefits and all other types of retirement income are only subject to federal taxes. While the lack of income tax is offset by higher sales and property taxes, the cost of living in Amarillo ranks below the national average for five out of the six categories we considered. We estimate that a retiree would spend about $44,000 annually in Amarillo and would need just over $575,000 in savings at the start of retirement to maintain that level of spending over 30 years.

Though the estimated annual cost of living is slightly lower in Oklahoma City, Oklahoma than it is in Amarillo, average tax rates for seniors are about 1% higher, meaning that seniors in Oklahoma City will need slightly more in savings. Specifically, we estimate that the typical retiree would need $580,069 in savings, about $4,600 more than they would need in Amarillo, to maintain the national average retiree’s standard of living over 30 years.