The Least-Stressed Cities in America – 2019 Edition 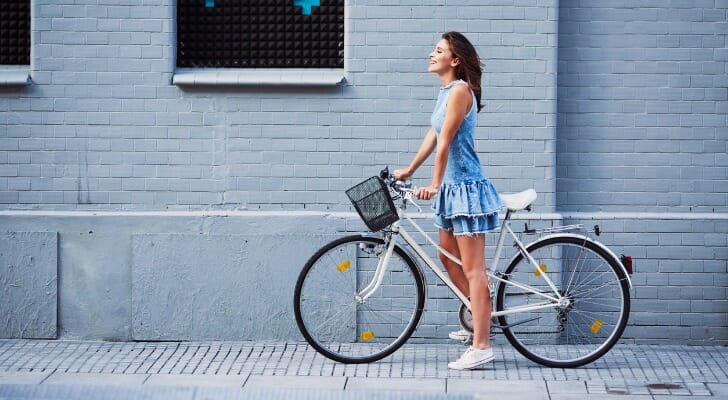 The American Psychological Association’s 2018 survey on stress reports that the average American reported a stress level of 4.9 (on a scale of 1 to 10). Reported stress levels vary by generation, as noted in the report, but also by geographic location. Local lifestyle and environmental factors can impact the amount of stress we feel on a day-to-day basis. Places with higher employment and lower bankruptcy rates, for example, may allow people to plan a more secure future with a financial advisor. In order to better understand which places may be associated with lower levels of stress, SmartAsset ranked the least-stressed cities in America.

For this study, we considered data primarily from the U.S. Census Bureau along with various other sources, including the Institute for Health Metrics and Evaluation along with the Administrative Office of the U.S. Courts and Jawbone. We compared cities across nine metrics: average hours worked per week, average commute time, average amount of physical activity, concentration of entertainment establishments, unemployment rate, bankruptcy rate, housing cost as a percentage of income, average hours of sleep per night and divorce rate. Check out our Data and Methodology section below for more information on our data and how we put it together our final rankings.

This is SmartAsset’s fifth annual study on America’s least-stressed cities. Check out the 2018 rankings here. 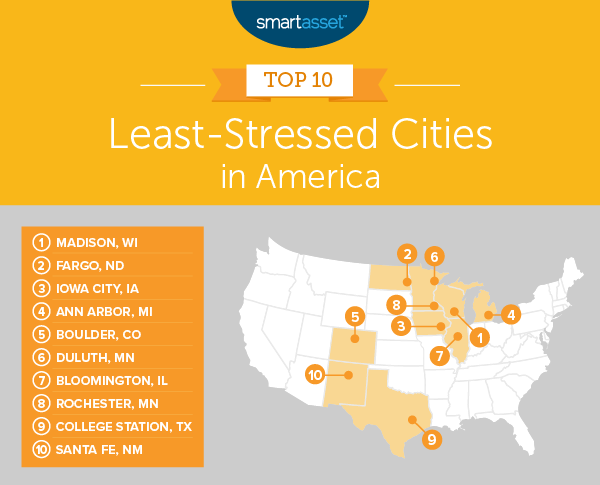 Wisconsin’s capital, Madison, is at the top of our list for least-stressed cities in 2019. Located between Lake Mendota and Lake Monona, Madison has many bike trails throughout the city and its surrounding areas, allowing residents to stay active. Like last year, it ranks better than 85% of cities when it comes to physical activity.

The most populous city in North Dakota and accounting for nearly 17% of the state’s population, Fargo is a relatively affordable and compact city. According to Census Bureau estimates, the median housing cost as a percentage of median household income in 2017 was 17.37%, the 10th lowest of all cities analyzed. Fargo is also a great city for people looking for a short commute. The average resident has a commute time of about 15 minutes.

Ranking as the top least-stressed city in our 2018 study, Iowa City, Iowa fell to third in 2019. Iowa City has the lowest bankruptcy rate of any of the 474 total cities in our study, with only 0.01% of residents filing for bankruptcy from March 2018 to March 2019.We found that, like last year, residents in Iowa City have a significant amount of leisure time. The city ranks fourth overall in terms of workweek, with residents working an average of only 33 hours per week. In fact, the average number of hours decreased more than an hour from last year, when we found that employees here worked an average of 34.1 hours per week. As an added bonus, it’s one of the top cities for working parents.

Moving up five spots from ninth place in our 2018 study, Ann Arbor, Michigan does consistently well across all metrics. It places in the top quartile of all cities for six of the nine metrics and the top half of all 474 cities in our study for the remaining three metrics. Though Ann Arbor’s economy relies significantly on the University of Michigan, there are many other job opportunities outside of the university as companies have been drawn to the area because of its research focus. Low unemployment figures can help keep stress levels low.

A growing hub for technology companies, Boulder, Colorado is our fifth-least-stressed city. Residents in Boulder work an average of 34.5 hours per week, and the unemployment rate is 4%. Unsurprisingly, given its geographic location and the wide variety of outdoor activities available, residents in Boulder are active. About 63% of residents get sufficient physical activity.

Unfortunately, Boulder is a relatively expensive place to live. According to Census Bureau estimates, the median housing costs as a percentage of median household income in 2017 was 28.95%, putting it in the bottom 50 cities for this metric as well as signaling risk of housing-cost burden.

Residents of Duluth, Minnesota get the most sleep on average compared to the residents of any other city in our top 10 least-stressed cities – more than seven hours per night. That’s a top-5 rate overall. Duluth also ranks well in terms of average hours per workweek and commute times, ranking 24th overall for its average 35 hours of work per week and 62nd overall for its 18.6-minute commute time. Notably, Duluth has a higher unemployment rate than all other cities in our top 10. According to Census Bureau estimates, more than 5% of Duluth residents in 2017 were unemployed.

One of our best places for children and the second city in Minnesota to make our top 10, Rochester does very well in terms of housing statistics. The median housing costs make up 17.44% of median household income, a top-15 rate. However, of any of the cities in our top 10, Rochester has highest average workweek. Residents of Rochester work an average of 38.7 hours per week relative to the average of 38.2 hours across all 474 cities.

College Station, Texas is home to the main campus of Texas A&M University and has extremely low bankruptcy and divorce rates, ranking second (at 0.04%) and first (at 4.47%) for these metrics, respectively, across all cities in our study. Somewhat surprisingly given the low rates of bankruptcy, College Station has a high median housing cost as a percentage of median income. According to Census Bureau estimates, in 2017 median housing costs made up 27.33% of median household income. Relative to all 474 cities, College Station ranked 387th in this metric.

Santa Fe, New Mexico ranks well in terms of health and entertainment. More than 65% of residents get sufficient physical activity, and the average nightly sleep for residents is more than seven hours, both of which are top-20 rates. Residents also have many options in terms of restaurants, bars and other forms of entertainment, which make up roughly 29% of all establishments. Notably, Santa Fe has a high divorce rate, ranking 472nd out of 474 for this metric. According to Census Bureau estimates, 18.31% of residents in 2017 were divorced. 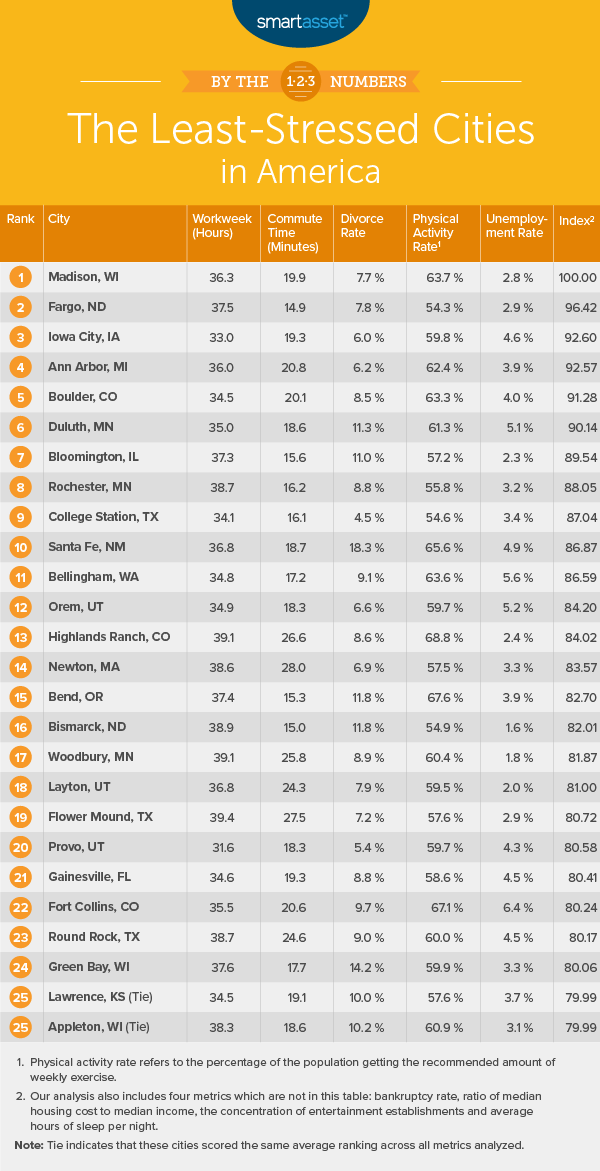 In order to find the least-stressed cities in the country, we analyzed data for 474 cities, looking at nine metrics to determine our ranking: