What Is Deficit Spending? 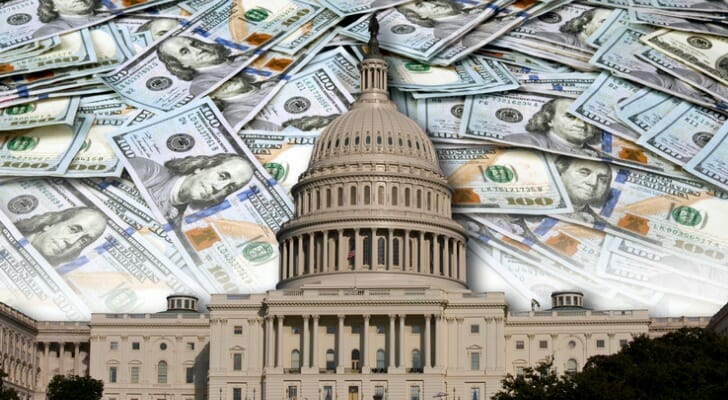 Deficit spending occurs when the federal government spends more than it collects. This means that the federal budget exceeds both the government’s revenues for the year and any surplus it currently holds. This difference is known as the “deficit,” and in recent years the nation’s annual deficit has ballooned.

To cover this deficit, the government issues debt, typically Treasury securities. The debt generated by any given year’s deficit spending increases national debt, which is now more than $20 trillion. Like most debt, securities sold by the Treasury have interest, which the federal government pays each year.

What Causes A Deficit?

Deficit spending, otherwise known as running a budget deficit, is caused by the government’s spending exceeding its revenues. In some cases the government can make up for this shortfall by using surplus cash on hand, but this is infrequent.

What’s more frequent is the annual shortfall not being made up. The White House, through its Office of Management and Budget, estimates that for the 12 months ending Sept. 30, 2020 (fiscal 2020), the federal deficit will be $1.09 trillion. That’s up from each of the previous five years:

The federal government defines its spending in a number of ways. One such way is described in the annual federal budget. This accounts for most of what’s known as “discretionary spending,” government spending not required or mandated by law.

Another part of annual government spending is interest due on the national debt.

These expenses are set against federal revenues. For the U.S. government, almost all revenue for discretionary spending comes from the federal income tax. Approximately 35 percent comes from dedicated payroll taxes. These taxes are earmarked for social insurance programs, chiefly Social Security and Medicare, meaning that the money can’t be spent for any other purpose. Any dollars collected through payroll taxes may only be spent for the dedicated fund and not diverted, for example, to defense programs or education. 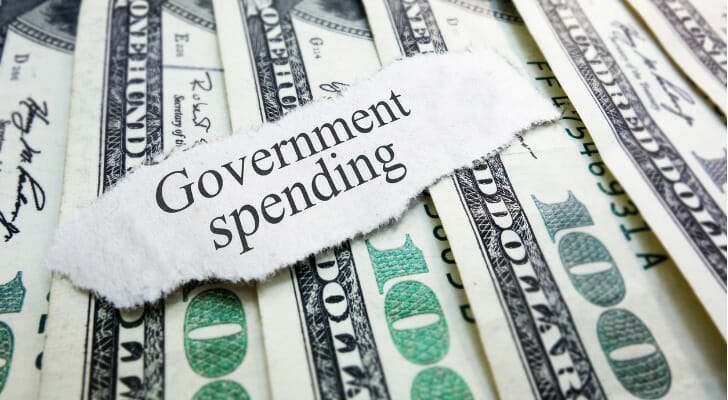 Government debt occurs when it runs a deficit.

In any given fiscal year the money for government spending has to come from somewhere. In some (relatively rare) cases, the government will generate the money – that is, expand the nation’s money supply – to cover its spending directly. This is sometimes referred to as “printing money,” although the Treasury rarely actually prints physical bills. Instead it will generate the money electronically, by simply adding money to the relevant accounts.

Only the federal government has this power. It is a felony for any other organization or individual to directly create money, including state or local governments.

It’s rare for the government to pay its bills by printing money for fear of inflation. If the government creates money too freely, the supply of cash will exceed the economy’s ability to generate goods and services. This will push prices up. However, inflation is not an inevitable result of creating money. It generally occurs only when the government generates more money than consumers can and will spend.

Instead, typically when the government runs a deficit in a given year, it covers this difference by issuing debt. In this case the Treasury sells securities such as bonds and notes. This brings in cash to cover the shortfall in government revenues. In exchange the government pays interest on these securities.

The U.S. spends significant amounts on social insurance. Yearly spending by Social Security, Medicare and Medicaid alone now tops $2 trillion. But whether these and similar programs pose a danger to the nation’s economic health is debated. Consider Social Security itself. In 1990 Congress decreed that Social Security deficits and surpluses would not be included in its calculations of budgetary spending or calculations of deficits or surpluses. In other words, Social Security is off-budget. Further, the payroll tax incomes for Social Security and Medicare (along with any surplus and existing funds) is – currently – enough to fund them. As a result, social insurance programs are not currently drawing on other government revenues or contributing to deficit spending.

However, that is expected to change shortly. The two trust funds that cover Social Security spending, for example, are expected to be depleted in the 2030s, according to both the Congressional Research Service and the Social Security Administration. In other words, “the government’s future liabilities for Social Security far exceed the accumulated balances in its trust funds,” according to the Congressional Budget Office. Economists are divided over whether dealing with the government’s future liabilities in the next decade will be traumatic or trivial or something in between. Some argue that it could be a matter of significant financial and economic consequence; others argue that it could be handled with just several “modest changes.”

Deficit spending occurs when the government spends more than it collects in revenues during a given budget year. It typically makes up this difference by borrowing money, which generates debt and increases the amount the government must pay in interest.