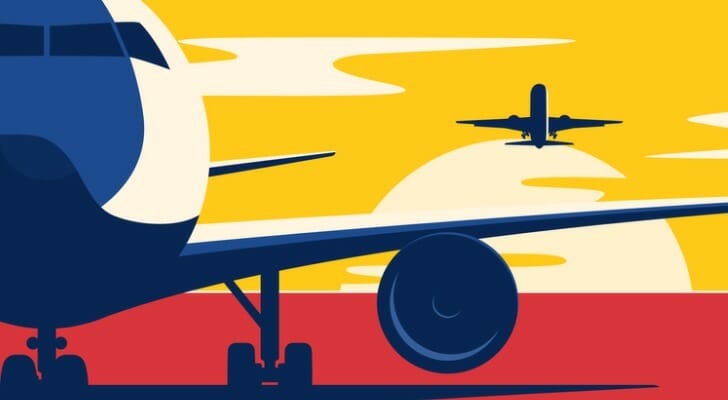 If you’re a frequent flyer, odds are you want to make your life as easy as possible when you have to jet off somewhere. But not all cities are equally equipped to facilitate your next adventure to the friendly skies. From the number of airports in a given area to the total number of nonstop destinations you can reach from a city, there are a range of factors that determine which cities are best for people who fly on a regular basis. Keep in mind that it can be helpful to work with a financial advisor if you spend a large chunk of your income on travel to help with budgeting and financial management.

In order to determine the best U.S. cities for frequent flyers, we looked at eight key metrics for each city, including total number of domestic and international flights, total number of international destinations, distance between the city center and the airport, driving time from the city center to the airport, average fare for a domestic flight, percentage of flights delayed and percentage of flights cancelled. Several cities, such as Chicago and New York, included more than one airport. To control for this variable, we included all airports within 25 miles of each city’s downtown. For details on our data sources and how we put all the information together to create our final rankings, check out the Data and Methodology section below. 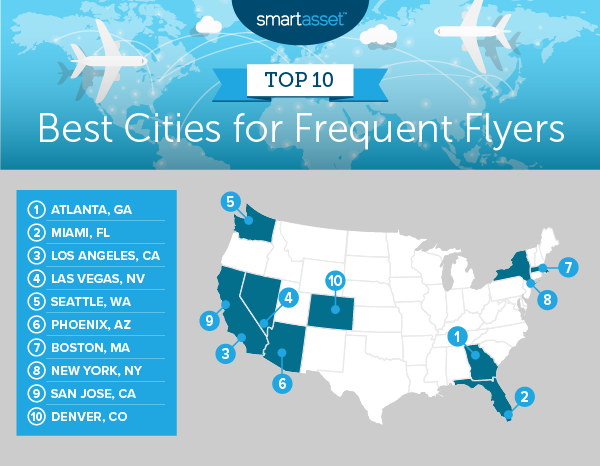 It should come as no surprise that Atlanta, Georgia, the city with the busiest airport in the world by total passenger traffic, Hartsfield-Jackson Atlanta International Airport (ATL), sits at the top of our list of the best cities for frequent flyers. ATL is also a major hub for Delta Air Lines, which contributes to its prominence. While the metropolitan Atlanta area also includes DeKalb–Peachtree Airport (PDK) and Fulton County Airport (FTY), flights departing from these airports accounted for less than 1% of the flight traffic originating in Atlanta.

Miami, Florida is home to two airports reserved primarily for private aviation, one seaplane base and Miami International Airport (MIA), which serves as the city’s principal airport. The vast majority of flights originating in Miami took off from MIA. As a major hub for American Airlines and international flights, MIA consistently ranks as one of the busiest airports in the country.

Miami is commonly known as a portal to South America, Latin America and the Caribbean, so while only about 94,000 domestic flights originated in Miami – a rate that ranks towards the middle of the study, at 24th-highest – the city boasted more than 90,600 international flights in 2018. Miami was second only to New York – a city with three major airports – in terms of international flights as destinations. While it ranks in the bottom half of the study for its approximately 19% of flights delayed, it ranks 22nd overall for percentage of flights cancelled (a little more than 1%) and ranks third in the study for its relatively short distance between the airport and downtown. MIA is just five miles from downtown Miami, making it one of the more convenient airports for frequent flyers to get to.

Los Angeles, California, taking the No. 3 spot in our study, is the first city on our list with just one airport – but that doesn’t take away from its prominence. The city’s sole airport, Los Angeles International Airport (LAX), was the second-busiest airport in the U.S. in 2018 by total passenger traffic and boasts a range of international destinations to Asia, Europe and the Middle East.

Los Angeles ranks in the top half of the study for all but two key metrics, distance and time between the airport and downtown. Since the city of Los Angeles hardly centers around its downtown area, this may not be as much of a problem for resident frequent flyers. The famous airport ranked eighth overall for total number of domestic flights and third for both international flights and international destinations. Flights out of Los Angeles were only delayed 17.63% of the time, which is the third-lowest rate for this metric in the top 10­­­.

Las Vegas’s smaller Henderson Executive Airport and even Nellis Air Force Base did see some commercial traffic last year, but most of the city’s air traffic came from McCarren International Airport (LAS). LAS serves destinations throughout the country and the world. It is a focus city for several airlines, including Southwest Airlines, Spirit Airlines and Frontier Airlines.

Las Vegas has top-20 rates for its number of domestic flights, international flights and international destinations, but most impressively, it ranks fifth overall for distance to airport, as LAS is just four miles away from downtown. The city ranks third for average domestic flight fare and eighth-best for cancellations. Unfortunately, Vegas also ranks 43rd overall when it comes to delays. About 20% of flights originating in the city are delayed by more than 15 minutes. Las Vegas also ranked as the No. 1 city in our in our study of best cities for retirees who want to travel.

Seattle, Washington sits just a few minutes away from Everett, where all of Boeing’s planes are manufactured. Boeing Field (BFI) is included in our analysis of Seattle, along with Kenmore Air Harbor Seaplane Base (LKE), but Seattle-Tacoma International Airport (SEA) accounts for about 98% of the total flights originating in Seattle. Delta Air Lines has one of its hubs at SEA, commonly known as Sea-Tac.

Seattle ranks 12th overall for its high number of domestic flights, high number of international flights, low average fare for a domestic flight and low percentage of flights delayed. It also ranks 13th overall for its high number of international destinations. Where the city really lags is for its almost 15-mile distance from downtown to SEA, ranking 40th overall. However, Seattle is also the first city on our list that earns a top spot for any of the metrics we considered. Despite the often rainy climate, it only cancelled 0.47% of flights, fewer than any other city in the study, signaling a very efficient airport.

Phoenix, Arizona is one of the biggest cities by area in the country, so it makes sense that four separate airports made it into our study. The biggest airport is Phoenix Sky Harbor International Airport (PHX), which accounted for the majority of the city’s domestic traffic last year. It is also an American Airlines hub. Scottsdale Airport, Deer Valley Airport and Phoenix-Mesa Gateway Airport also made it into the study.

While Phoenix only ranks 20th in total number of international flights originating in the city, it ranks 13th for the number of domestic flights originating in the city. Nestled next to downtown Phoenix right along the Salt River, PHX is only 6.6 miles from downtown (the other Phoenix airports are all more than 10 miles away). The city is 18th-cheapest overall when it comes to average fare for a domestic flight (at about $341), 17th-worst for percentage of flights delayed (at about 19%) and an impressive 10th-best in percentage of flights cancelled (at about 0.75%).

Boston, Massachusetts is another city on our list of the top cities for frequent flyers that only has one airport to its name. Logan International Airport (BOS) sports some impressive numbers, despite serving a city of fewer than 700,000 people. The airport serves a wide range of destinations, ranking 18th out of all 50 cities in our study for total number domestic flights originating in a city and 13th overall for total number of international flights originating in a city. BOS is a hub for Delta Air Lines and the small, regional Cape Air. It is also a focus city for JetBlue.

Where Boston really takes off is with BOS’s proximity to downtown. It ranks first for this metric in the study, with just 3.5 miles between the airport and downtown. For a prominent coastal city, that proximity can be considered extremely convenient for travelers. The city also ranks a respectable 13th across all 50 cities in the study for the low average fare for a domestic flight, at approximately $330. So why doesn’t Boston rank higher overall for frequent flyers? BOS is dead last when it comes to flights being delayed and is sixth-worst overall for cancellations.

It might come as a surprise to some that New York doesn’t rank at the very top of our list of the best cities for frequent flyers. New York has three major airports with LaGuardia Airport (LGA), Newark Liberty International Airport (EWR) and John F. Kennedy International Airport (JFK). Several airlines call New York home. EWR serves as a main hub for United Airlines, whereas American Airlines and Delta Air Lines use JFK and LGA as hubs. JetBlue’s global operating base and hub is also at JFK.

New York blows every other city out of the water when it comes international flights and international destinations. The city lands smoothly into first place in terms of number of international flights in 2018, at 148,708 – beating the No. 2 city for that metric, Miami, by more than 50,000. It ranks second only to Chicago when it comes to number of domestic flights originating in a city. So why doesn’t New York rank more highly for frequent flyers? The city’s airports can be notoriously hard to access, with JFK coming in dead last in average travel time to and from downtown. New York also ranks 38th when it comes to average fare for a domestic flight (at almost $385), 32nd for its percentage of flights delayed (approximately 19%) and 47th for its percentage of flights cancelled (approximately 3%).

Despite its relative proximity to San Francisco and Oakland, San Jose, California is another city on our list for which we only looked at one airport. Airports for those cities lie outside the 25-mile radius from downtown San Jose. Norman Y. Mineta San Jose International Airport (SJC) has just two runways, and while it doesn’t serve as a hub for any airlines, it is a focus city for both Southwest Airlines and Alaska Airlines. It sits just 3.9 miles from downtown San Jose. That translates to just eight minutes of driving time, ranking number one on our list for this metric out of all 50 cities in the study.

SJC had the fewest number domestic and international flights in 2018 of any city in our top 10 and also serves the fewest number of international destinations across all of our top-10 cities. That said, the city still ranks toward the middle of the study for all three of those metrics. SJC boasts the fifth-least expensive average fare for a domestic ticket. It also does well when it comes to percentage of originating flights delayed and percentage of flights cancelled, ranking 17th and 13th overall for these metrics, respectively.

Partly due to its status as a hub and its central location in the U.S., Denver had the seventh-highest number of domestic flights in 2018 across all 50 cities in the study, at 275,407. It ranks just ahead of the middle of the pack when it comes to international flights and international destinations, at 17th overall and 22nd overall, respectively. However, DEN is 10th-worst in terms of distance from downtown to the airport (approximately 16 miles) and 15th-worst when it comes to percentage of flights delayed (approximately 19%). On a more redeeming note, the city has the seventh-cheapest fare for a domestic flight and the sixth-lowest percentage of flights cancelled. 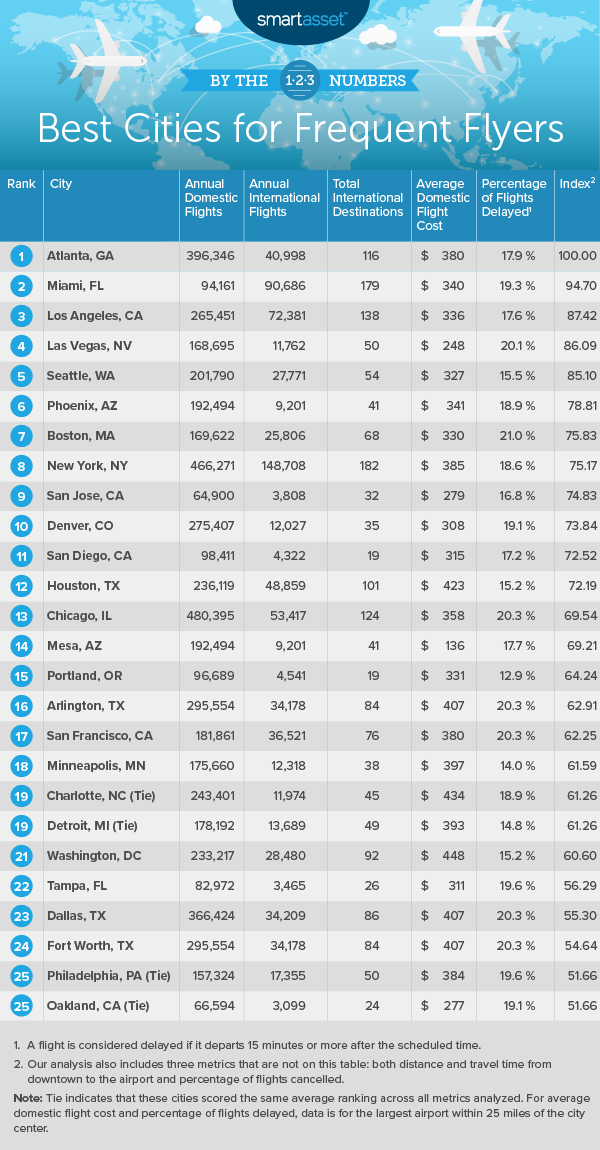